Pooled testing for coronavirus could be fastest, cheapest way to increase screening nationwide

Researchers have shown that pooled testing is about as accurate as individual testing in pools as large as eight people.

Hopes for a summertime reprieve from COVID-19 have been dashed as cases surged in June. As infections rise, so does the need for testing. In late June, Dr Anthony Fauci, director of the National Institute of Allergy and Infectious Diseases, announced that health officials were considering pooled testing for COVID-19 in response to the recent surge. On 18 July, the Food and Drug Administration issued an emergency use authorization to Quest Diagnostics that would allow the lab testing company to pool samples from up to four patients to test for the coronavirus.

So what is pooled testing, and why does the US need it?

The basic idea of pooled testing is that it allows public health officials to test small groups – called pools – of people using only one test. This means you can test more people faster, using fewer tests and for less money.

Instead of testing one person at a time, samples from multiple individuals would be mixed together and tested as one. If the test comes back negative, everyone in the pool is clear. If positive, each member of the pool is then tested individually.

For example, imagine a workplace with 20 people, one of whom is infected. Pooled testing divides the 20 people into four groups of five. Samples are taken from each person and mixed with the samples from other people in their group. Each grouped sample is then tested – four tests in all.

One of the pools will turn up positive because it contains a single infected person. All five people in this pool are then retested individually, and the one sick person is identified. For pooled testing, individual samples are collected, then multiple samples are mixed together and screened using a PCR test that looks for bits of viral RNA. AP Photo/David Zalubowski

In all, nine tests are used and all 20 workers have been screened. If everyone had been screened individually, it would have taken 20 tests.

In practice, the number of tests saved by pooling varies depends on the fraction of people infected. Higher infection rates mean that more pools come back positive, more people need to be retested, and savings from pooling are lower.

No matter the exact amount, at a cost of about US$100 per test, the savings add up.

Pooled testing has long been used to test large asymptomatic populations for the disease. State labs have used it to screen for chlamydia and gonorrhoea, and the Red Cross has used it to test donated blood for Hepatitis B and C, Zika virus and HIV.

And some places have already begun using pooled testing to screen for active coronavirus infections. 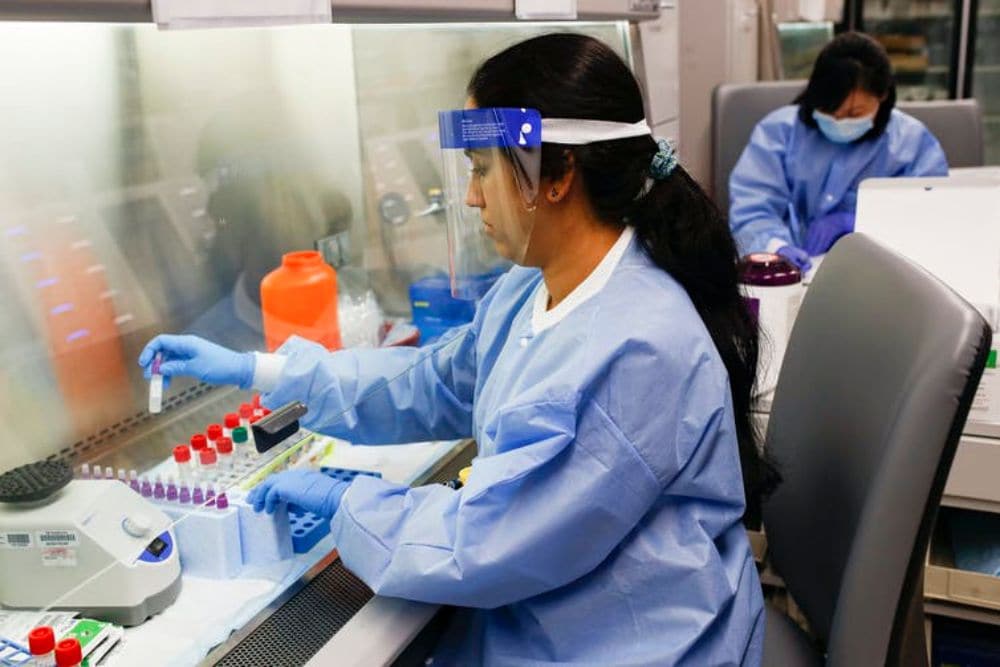 Research has shown pooled testing to be accurate for pools up to eight samples, but labs need to get certified to do pooled testing before this approach could be widely adopted. AP Photo/John Minchillo

Stanford University used pooled testing to monitor the early spread of COVID-19 in the Bay Area. Nebraska’s Public Health Laboratory pooled and tested samples from five-person groups and roughly doubled the number of suspected COVID-19 patients it could test weekly.

Some people have expressed concern that the dilution of samples from pooling could reduce the accuracy of the PCR tests that look for viral RNA in samples. Fortunately, researchers have already shown that pooled testing is about as accurate as individual testing in pools as large as eight people.

Another concern is infection prevalence. When infection rates climb higher than 15 percent, too many pools come back positive and pooling is no longer more efficient. Fortunately, on a nationwide basis, only about five percent of tests on suspected cases are coming back positive. Even in extreme hot spots like Texas, where 10 percent or more of suspected cases are testing positive, pooled testing could still be useful.

But the real strength of pooled testing would be seen if health officials start implementing large-scale testing of the general population.

For the most part, patients are currently tested only when a health care provider suspects they might be infected with SARS-CoV-2. However, asymptomatic and presymptomatic COVID-19 patients are common and are likely a major source of COVID-19 transmission. For this reason, experts have recommended screening everyone for infections.

In the general population, the prevalence of new infections is estimated to be less than two percent, even in the hardest-hit states. At these rates, pooled testing could reduce test costs by 80 percent or more.

What to do next?

To date, the US has conducted around 30 million COVID-19 tests, covering a bit less than 10 percent of its population. Yet, some experts have called for testing America’s entire population every three months or even every two weeks.

Considering that American labs are already short of testing reagents, it seems doubtful companies could soon produce enough material to run this many individual tests – assuming companies or governments could even pay for them all. Widespread use of pooled testing can help screen more people using fewer laboratory tests.

In order to increase capacity, the FDA recently released guidance that lays out a path to pooled testing authorization so more labs and test manufacturers can start doing it.

Another potential obstacle is cost. If labs charge much more for testing a pooled sample than they do for an individual one, any cost savings will dissipate.

Cheaper, faster testing methods enable screening that is more widespread and more frequent. Frequency is critical for monitoring a disease that spreads rapidly. Moreover, repeat testing helps pick up cases that might have been missed previously. Retesting helps, because research suggests that PCR tests miss about 20 percent of infected cases, no matter whether they are pooled or not.

The recent authorization to begin pooled testing is an important step in the right direction. Pooling is an effective way to get the US closer to the goal of universal and repeated testing that will help contain the spread of this relentless disease..

This is an updated version of an article originally published on July 2, 2020.