Emissions from the Indo-Gangetic and central India are affecting Bangladesh most severely among its neighbouring nations.

Dirty air from the Indo-Gangetic plain and central India is messing with ozone levels in the Indian subcontinent, a study has found. The authors emphasise the need for pan-India co-ordination to control the lung-damaging greenhouse gas, the chief ingredient of smog.

The research underscores the emergence of central India as a significant source of dirty air. Ozone monitoring in non-urban regions and better emissions inventories are needed to tackle the unhealthy boundary layer ozone, which is the ozone in the lowest part of the atmosphere, where people live.

Boundary layer ozone or “bad ozone” is not emitted directly by a source, which makes its control tricky. It is a colourless gas that forms when sunlight strikes various human-created pollutants (ozone precursors) such as nitrogen oxides, carbon monoxide and volatile organic carbons (VOCs) spewed by vehicles, power plants and other sources. Levels of this air pollution ingredient typically shoot up on hot, sunny days.

This bad ozone is different from the naturally occurring ozone in the upper atmosphere or the stratosphere, which blocks harmful ultraviolet radiation from the sun. 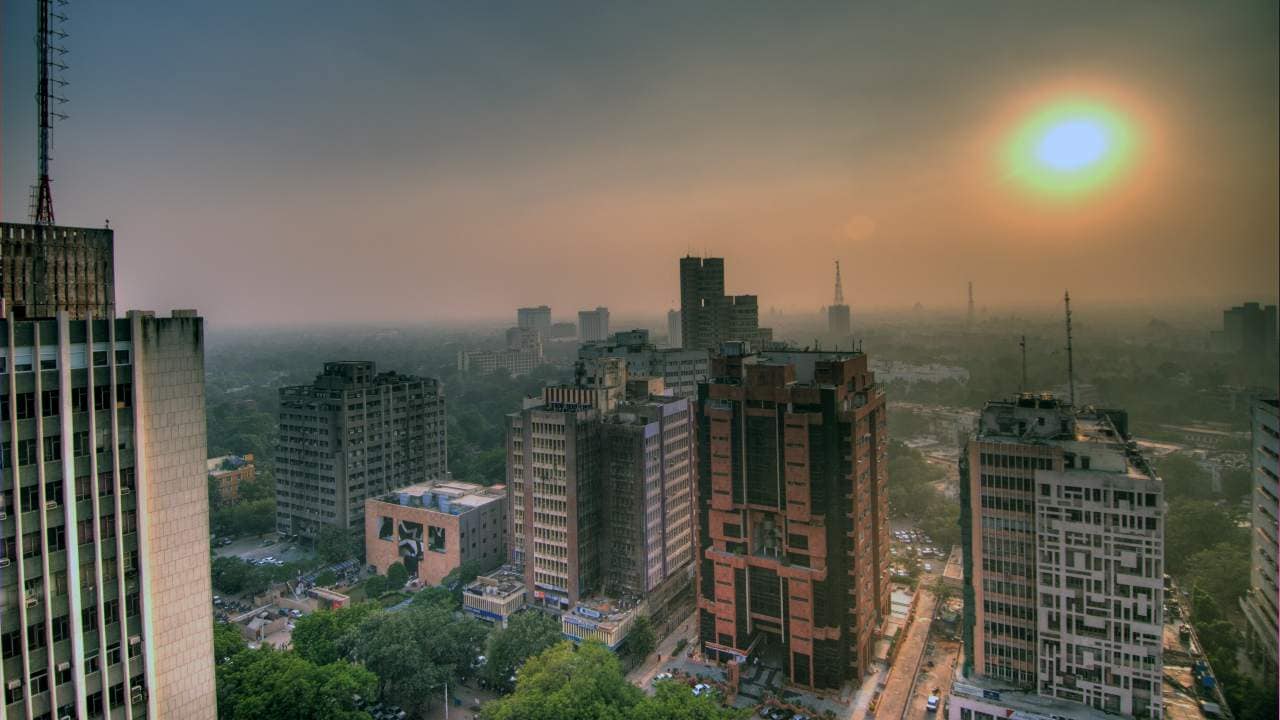 Smog in the city of Delhi. Image: Wikimedia Commons

Breathing air thick with ozone can have adverse impacts on human health and on the health of animals and vegetation. A recent analysis suggests that without aggressive reductions in emissions, "more than a million Indians will die prematurely" each year from long-term ozone exposure by 2050.

Liji M David of Colorado State University, Fort Collins, Colorado, who co-authored the study on transboundary movement of ozone in the Indian subcontinent with A R Ravishankara, said we should be worried about it.

“Even though ozone is invisible, it is a major pollutant. The boundary layer is where people live. Ozone pollution can lead to premature death, immediate breathing problem, cardiovascular effects, and other long-term exposure risks. It also impacts the crop yields – so this ozone can affect food supply too,” said David.

Using a chemical transport model, the study shows that the eastern realm of the subcontinent is at the receiving end of ozone toxicity from the densely populated Indo-Gangetic plain and central India’s industrial clusters. 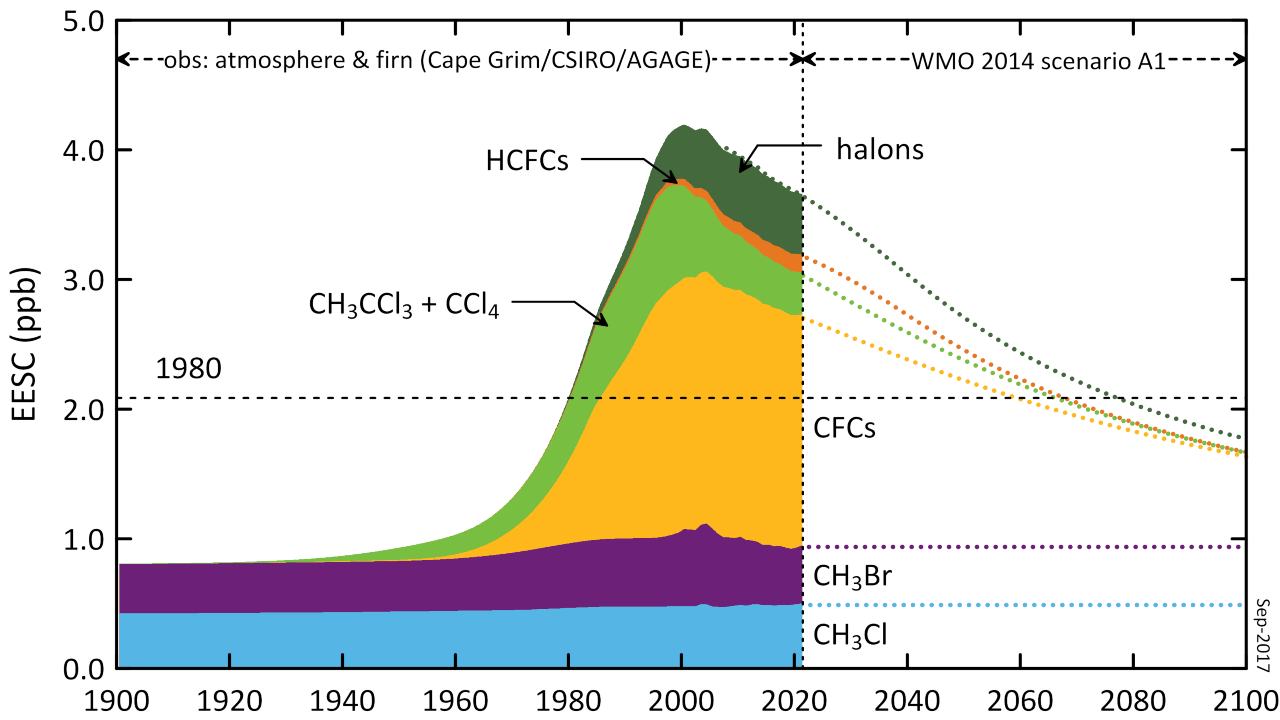 Roughly 30 percent of the boundary layer ozone in eastern India and Bangladesh comes from the Indo-Gangetic Plain and central India.

“About 40 percent of boundary layer ozone from central India is transported to other regions in the Indian subcontinent. The neighbouring country that is affected most by India’s activities is Bangladesh while Sri Lanka is not affected by ozone emissions from India,” David told Mongabay-India.

The message of the study is simple: “watch out, it is not just IGP.”

“Central India is also a region of pollutant source mostly from industrial activities since the population in this region is only one-third of that in the Indo-Gangetic Plain,” David told Mongabay-India.

Many countries such as the United States and China regulate ozone to counter its damaging effects on humans, animals and plants.

In the United States, ground-level ozone continues to be a persistent problem despite the strides made by the 1970 Clean Air Act in improving the country’s air quality. However, a 2018 data analysis pointed to a slowdown in the improvements from 2011 to 2015.

Long-term exposure of the U.S. population to air pollution, especially ozone, has been shown to accelerate lung disease (emphysema) by as much as smoking a pack of cigarettes every day would. Researchers associated with the emphysema study caution that as temperatures rise with climate change, ground-level ozone will continue to increase unless steps are taken to reduce this pollutant. But it’s not clear what level of the air pollutants, if any, is safe for human health, they said in a statement.

India has one of the highest exposure levels to air pollution globally. The “major components” of air pollution are fine particles, household air pollution, and to a “lesser extent” tropospheric or boundary layer ozone. Pointing to a scarcity of data on ozone exposure in India, experts and policymakers have drawn attention to addressing this gap in previous studies.

But an analysis by Cooperative Institute for Research in Environmental Sciences – a partnership of NOAA and the University of Colorado Boulder – using commercial aircraft profiles, shows that ozone has increased by approximately 20 percent in the boundary layer and in the free troposphere above India for the 20-year period 1994-2014.

Though most of the stations in India measure surface ozone (ozone at 5-10 metres above the ground), the conclusions derived by David for boundary layer ozone should also be valid for surface ozone, explained Rajesh Kumar, a scientist with the US’s National Center for Atmospheric Research (NCAR), Boulder, Colorado, a state well-known for several areas with ozone levels that do not meet the ozone standards set by the federal government.

Working together to control emissions

In the transboundary context in the Indian subcontinent, David stressed that none of the regions can independently control their boundary level ozone. They need to work together.

Rajesh Kumar agrees with the study authors on the need for a pan-India coordinated effort to address the ozone pollution problem.

“The study clearly shows that some parts of India (such as east, west and central India) are strongly affected not only by their own emissions but also by emissions from their neighbours,” Kumar, who was not associated with the study, told this visiting Mongabay-India correspondent.

The model further reveals that boundary level ozone would be brought down by only 25 percent if the Indo-Gangetic plain and central India switch off their own emissions, reinforcing the emphasis on co-ordination.

“More boundary level ozone was formed even in the IGP and central India from precursors imported into these regions,” the study said.

Another interesting finding of the study, according to Kumar, is that 65 to 70 percent of the ozone in northern India comes from outside of the Indian subcontinent, underscoring the need for international coordination to address ozone pollution problem in northern India.

The possibility of the same ozone influencing more than its nearest neighbours is small given that ozone in the boundary layer is destroyed within a few days.

The non-urban regions with lower emissions are still open to transport from other regions, i.e. the largely rural population of the Indian subcontinent.

The fact is the transport of boundary layer ozone and precursors will influence how regions plan on dealing with efforts to meet national ambient air quality standards.

For example, Sri Lanka can formulate its own strategy without too much coordination with India while Bangladesh cannot do so. This is because, according to the study, the Indian subcontinent was hardly influenced by Sri Lanka and vice versa. Sri Lanka was influenced more by import from outside the subcontinent than from its nearby regions within the subcontinent.

Also at play in the transport of boundary level ozone and its precursors (volatile organics and carbon monoxide) from one region to another is India’s unique meteorology, the researchers said, adding the seasonality depends on the prevailing winds and location of ozone precursor emission and ozone production regions.

According to atmospheric scientist Sagnik Dey of IIT Delhi ozone will be important in the future. “But currently in NCAP ozone is not a priority, rightly so as particulate matter is a much bigger problem now (in India),” Dey said.

And if NCAP includes plans to mitigate emissions of nitrogen oxides and volatile organic compounds then that should address ozone issue, said Rajesh Kumar. “We will need a detailed scenario analysis to quantify the impact of NCAP policies,” Kumar added.

World Ozone Day 2019: 32 years of the Montreal Protocol, the ozone layer is still on the mend