This week is a chance to practice empathy & compassion toward people suffering from the disorder.

Many of you would have heard or used the term OCD, short for Obsessive-Compulsive Disorder, for someone in the family or your circle of friends. Causally, the statement refers to cleanliness, arranging things or checking of things. To the surprise of some, OCD is not a habit but a mental health condition that affects 2-3 percent of the population.

Simply put, roughly 2 or 3 in every hundred people have OCD during their lifetimes. In the United States, it affects over 2 million adults. The World Health Organisation lists OCD as one of the top ten causes of disability, yet some people diminish or ridicule it as a personality quirk.

So, the week from 19th to 25th February 2019 has been marked as the OCD Week of Action, a campaign that aims to change people’s perception about the illness and support those suffering from it and thereby take action against it.

What is OCD, really?

Obsessive-Compulsive Disorder is a mental health condition in which a person is constantly either repeating an action or a thought. Therefore, OCD is considered as a chronic disease of obsessive thoughts and compulsive behaviors that can make the person anxious until he/she takes a certain action. In fact, studies suggest that people with OCD are 10 times more likely to commit suicide than the general population. 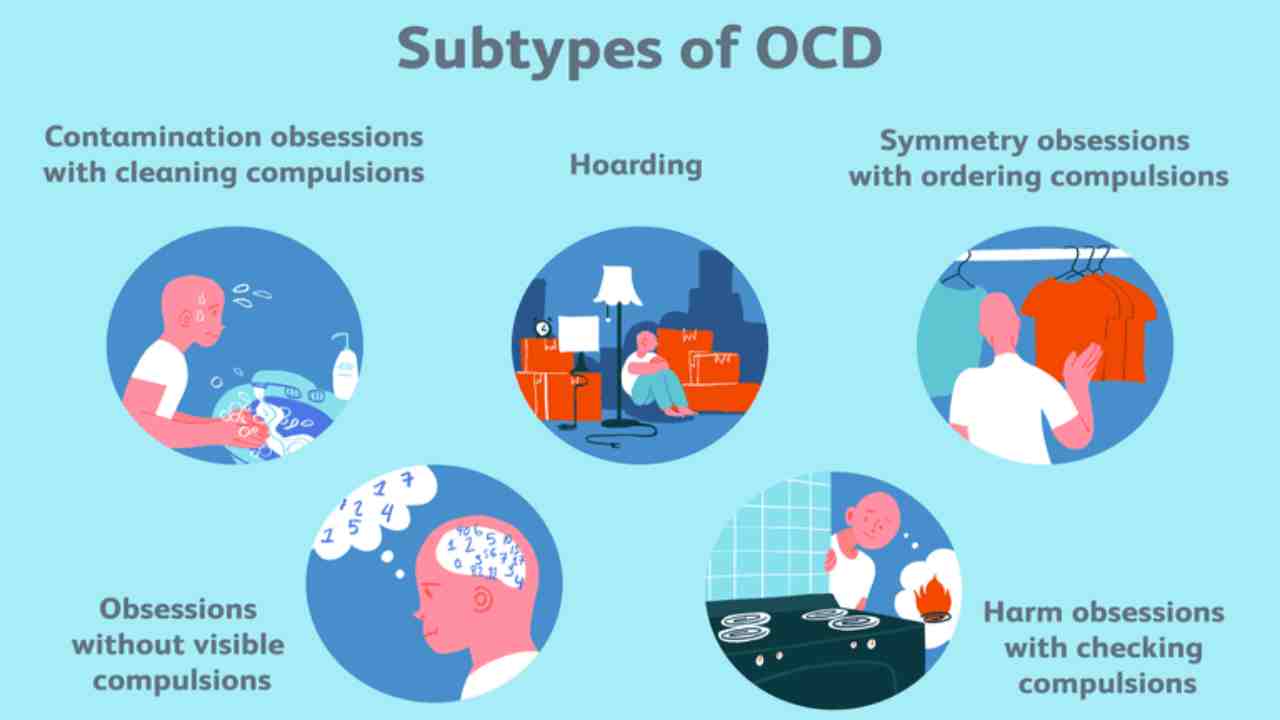 A few of the forms that OCD can take. Image credit: VeryWell

What are the symptoms?

The common symptoms of OCD are repeating unwanted ideas, or arranging things in a certain way, negative thoughts about terrible things happening to the loved ones, aggressive moods towards others or self, intrusive sexually implicit thoughts and images. These signs may seem regular but, what sets them apart from a normal person doing the same thing is that those with OCD cannot ignore these thoughts. To overcome them, a person feels compelled to take action and has a constant urge to do it again.

Another notable point is individuals suffering from it spends at least an hour, every day on these notions and behaviors. Also, performing them does not give them any pleasure but only relaxes them from their distress. Thus, the person finds himself stuck in a paralyzing vicious circle of obsessions and compulsions.

Some people have apparent symptoms like a tic disorder like blinking of eyes, facial twisting, shoulder shrugging, sudden jerking of head or shoulder or vocal tics like repetitive throat-clearing, sniffing, or grunting sounds. There is no particular cause of OCD but some factors that can lead to one developing it are-
• Genetics: People who have a family history or have first-degree relatives i.e. those related by blood are at a higher risk of this disorder. These individuals have a likelihood of getting it as children or in their teens.
• Brain structure: It is said to occur to those who have a difference in the cerebral cortex and subcortical structures of the brain. Though research is underway for this, such abnormalities can result in OCD.
• External environment: A person who has faced sexual or physical abuse or any other trauma during childhood is also prone to developing it.

How is OCD diagnosed and treated?

The most appropriate action to find out if one has OCD is by visiting a psychiatrist. It usually involves a counseling session where the professional might ask questions around one's habits, thoughts and feelings.

Obsessive-compulsive disorder is not completely curable. Nevertheless, treatments can bring down the severity by a considerable degree. The right medication and psychotherapy can bring many people to a situation where OCD does not affect their daily lives very much. However, these treatments do usually need to be continued for a long period of time. With new development in psychiatry and behavioural therapy, OCD is now better understood and managed. Therapies like Cognitive Behavioral Therapy (CBT), Exposure and Response Prevention (ERP), and antidepressant medicines are most commonly practiced and proven effective treatments.

CBT is a therapy centered around making one understand their behaviour around the pervasive thoughts and helping them alter it to function better despite having these thoughts. ERP is the most important form of CBT used to treat OCD. The patient is exposed to the situations that trigger the response and is then guided to choose to not act on those compulsive urges.

Since OCD is considered a mental illness, talking action through education can play a pivotal role in spreading awareness about the disorder. The OCD week of action is thus a positive step for people suffering from it. Learning about other’s experiences can be empowering as it lets the sufferer know that he/ she is not alone and makes it’s easy for them to reach out for help.

Raising awareness would help reduce the sense of isolation for those living with the condition. Having said that, it would be the start of a process, not the end. Having a solid support system of friends and family, that gives a comforting feeling to the sufferer, could make a significant difference.

At the heart of it, OCD week of action is an opportunity to practice empathy and compassion to people who are suffering from this grave disorder.

The author is a senior consultant in the medical team at Docprime.com

'This is one to watch': WHO hosts special meeting on worrying new COVID-19 variant