Stockholm: Two scientists won the Nobel Prize in chemistry Wednesday for developing a way of editing genes likened to “molecular scissors” that offer the promise of one day curing inherited diseases.

Working on opposite sides of the Atlantic, Frenchwoman Emmanuelle Charpentier and American Jennifer A Doudna came up with a method known as CRISPR-cas9 that can be used to change the DNA of animals, plants, and microorganisms.

It was the first time two women have won the chemistry Nobel together — adding to the small number of female laureates in the sciences, where women have long received less recognition for their work than men.

The scientists' work allows for laser-sharp snips in the long strings of DNA that make up the “code of life,” allowing researchers to precisely edit specific genes to remove errors that lead to disease.

“There is enormous power in this genetic tool, which affects us all,” said Claes Gustafsson, chair of the Nobel Committee for Chemistry. "It has not only revolutionized basic science but also resulted in innovative crops and will lead to groundbreaking new medical treatments.”

Gustafsson said that, as a result, any genome can now be edited “to fix genetic damage.”

Dr Francis Collins, who led the drive to map the human genome, said the technology “has changed everything” about how to approach diseases with a genetic cause, such as sickle cell disease.

“You can draw a direct line from the success of the human genome project to the power of CRISPR-cas to make changes in the instruction book,” said Collins, director of the National Institutes of Health that helped fund Doudna’s work.

But many also cautioned that the technology must be used carefully and that it raises serious ethical questions. Much of the world became more aware of CRISPR in 2018, when Chinese scientist He Jiankui revealed he had helped make the world’s first gene-edited babies, to try to engineer resistance to future infection with the AIDS virus.

His work was denounced as unsafe human experimentation because of the risk of causing unintended changes that could pass to future generations, and he’s currently imprisoned in China.

In September, an international panel of experts issued a report saying it’s still too soon to try to make genetically edited babies because the science isn’t advanced enough to ensure safety, but they mapped a pathway for countries that want to consider it. 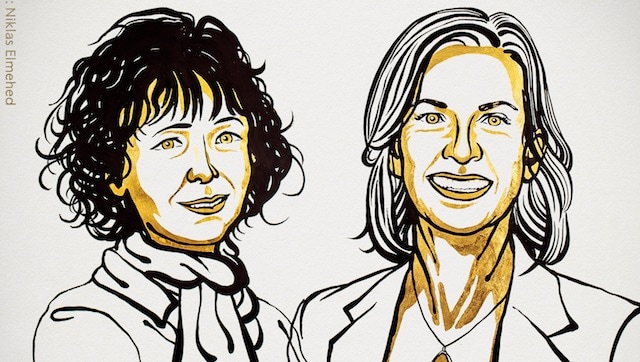 The 2020 #NobelPrize in Chemistry has been awarded to Emmanuelle Charpentier and Jennifer A. Doudna “for the development of a method for genome editing.” Twitter/@NobelPrize

“Being able to selectively edit genes means that you are playing God in a way,” said American Chemistry Society President Luis Echegoyen, a chemistry professor at the University of Texas-El Paso.

Charpentier, 51, spoke of the shock of winning.

“Strangely enough I was told a number of times (that I’d win), but when it happens you’re very surprised and you feel that it’s not real,” she told reporters by phone from Berlin after the award was announced in Stockholm by the Royal Swedish Academy of Sciences. "But obviously it’s real, so I have to get used to it now.”

When asked about the significance of two women winning, Charpentier said that while she considers herself first and foremost a scientist, she hoped it would encourage others.

“I wish that this will provide a positive message to young girls who would like to follow the path of science," said Charpentier, who is currently the director of the Max Planck Unit for the Science of Pathogens in Berlin.

Doudna told The Associated Press of her own surprise — including that she learned she'd won from a reporter.

“I literally just found out, I’m in shock," she said. "I was sound asleep.”

“My greatest hope is that it’s used for good, to uncover new mysteries in biology and to benefit humankind,” said Doudna, who is affiliated with the University of California, Berkeley and is paid by the Howard Hughes Medical Institute, which also supports AP’s Health and Science Department.

The breakthrough research done by Charpentier and Doudna was published in 2012, making the discovery very recent compared to many Nobel wins that are often only honored after decades have passed.

Speaking to reporters later at her lab, Charpentier said: “This discovery is only eight years ago. And it has boomed extremely. Everyone is using now the CRISPR-cas9.”

Pernilla Wittung-Stafshede, a member of the Nobel Committee, noted that the method had “already benefited humankind greatly.”

The Broad Institute at Harvard and MIT have been in a long court fight over patents on CRISPR technology, and many other scientists did important work on it, but Doudna and Charpentier have been most consistently honored with prizes for turning it into an easily usable tool.

The prestigious award comes with a gold medal and prize money of 10 million kronor (more than $1.1 million), courtesy of a bequest left more than a century ago by the prize’s creator, Swedish inventor Alfred Nobel. The amount was increased recently to adjust for inflation.

On Monday, the Nobel Committee awarded the prize for physiology and medicine to Americans Harvey J. Alter and Charles M. Rice and British-born scientist Michael Houghton for discovering the liver-ravaging hepatitis C virus.

Tuesday's prize for physics went to Roger Penrose of Britain, Reinhard Genzel of Germany, and Andrea Ghez of the United States for their breakthroughs in understanding the mysteries of cosmic black holes.

The other prizes are for outstanding work in the fields of literature, peace and economics.

US the highest-represented nationality among past science Nobel Prize winners

Nobel Prize 2020 in Physics awarded to Penrose, Genzel and Ghez for findings in cosmology, black holes