Teen activists from all over the world will convene for the first-ever Youth Climate Summit at the UN headquarters.

Environmentalists from around the world converge this week on New York for protests and an unprecedented youth summit aimed at pressuring global leaders at the UN to ramp up their carbon reduction commitments.

Ahead of that, though, students from New York's more than 1,700 schools will pour into the streets of the United States' biggest city for Friday's global climate strike, joined by potentially millions of others worldwide, including employees from major companies such as Amazon and trade unionists. Joint briefing by the President of the General Assembly and the Secretary-General's Special Envoy for the 2019 Climate Summit. image credit: UN

And on Saturday, Swedish campaigner Greta Thunberg, along with 500 other teen activists, will convene for the first-ever Youth Climate Summit at the UN headquarters, a testament to the growing power of a movement that has succeeded in popularizing the term "climate emergency" over the past year.

That phrase has been taken up by Guterres, who has called Monday's main summit because the world's major polluters remain far behind their pledges in the 2015 Paris agreement to reduce their greenhouse gas emissions enough to prevent climate catastrophe.

The secretary-general "has been very clear that he's asking countries to come to New York next week not to give flowery speeches, but to have concrete plans for how they intend to bring their national commitments in line with the science," Alden Meyer, director of strategy and policy for the Union of Concerned Scientists, told AFP.

The Paris agreement saw countries pledge to limit the rise in the average temperature of the Earth to two degrees Celsius over pre-industrial levels, and if possible 1.5 degrees Celsius.

To meet the 1.5 degrees goal, the world must achieve carbon neutrality by 2050, and greenhouse gas emissions need to fall starting next year, according to a landmark report issued last October by the Intergovernmental Panel on Climate Change.

The numbers so far are bleak.

Carbon dioxide emissions were their highest ever level in 2018; July 2019 was the hottest month in history, and the last four years have been the Earth's hottest on record.

Meanwhile, NASA data showed ice at both poles shrank to the lowest ever levels in 2019.

A marathon, not a sprint

According to Meyer, some 60 or so countries have indicated they intend to announce that they will enhance their climate commitments under Paris.

Crucially, however, these don't include the major emitters — the countries of the G20 which collectively represent over 80 percent of global emissions.

"This is a marathon, not a sprint," Meyer said. "Monday is not the be all and end all, though it's a very important political moment."

The US will be on the sidelines of the summit after announcing its withdrawal from the Paris agreement in 2017 under the leadership of President Donald Trump — but remains a signatory until 4 November 2020, a day after the next presidential election. 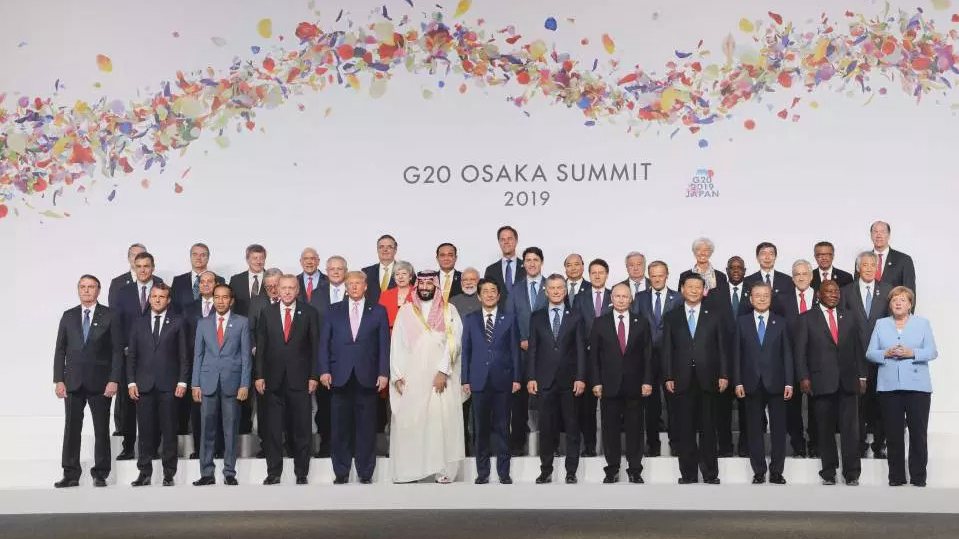 The G20 nations are the main contributors to the carbon emissions. image credit: AFP

Countries such as Brazil under the leadership of right-winger Jair Bolsonaro are pressing full speed ahead with deforestation plans while Australia is committing to more coal extraction.

Others, like China, the EU, and Canada, have signalled they are committed, but their actions have so far fallen well short of their rhetoric.

At the moment, only Morocco and Gambia have "compatible" commitments with the objective of the 2015 Paris agreement, according to the World Resource Institute's Climate Action Tracker.

That hasn't deterred the optimism of many of the youth activists participating in Saturday's summit.

"Greta has opened a door," Come Girschig, a 24-year-old from France, told AFP. But, he said, he was eager for the movement to develop concrete proposals. "It's very good that the youth are mobilized on the streets, calling themselves anti-capitalists, and wanting to change the system, but what do we replace it with?"

The summits also come at a time when there is increasing recognition that climate change is a human rights issue, Amnesty International chief Kumi Naidoo told AFP.

"We have to be very clear that the biggest intergenerational violation of human rights is what we are seeing right now with the current adult political and business leadership are governing as if we don't have children and grandchildren coming after us," he said. "Climate change threatens the very ability of human beings to exist on this planet and with no human beings are no human rights."