Lucy will be the first spacecraft to bag as many as 6 flybys & 4 gravity assists in a single mission.

In dreams and science fiction shows, zipping from one planet to the next looks pretty straightforward – navigationally speaking.

But the gymnastic finesse that real-life missions demand is a whole different game. Some of these trajectories are made even more complex by the fact that everything in the universe is moving constantly.

In 2021, NASA will launch the Lucy mission – a feat of navigation – to come into close quarters with six different asteroid targets, each in its own orbit around Jupiter over 12 years. 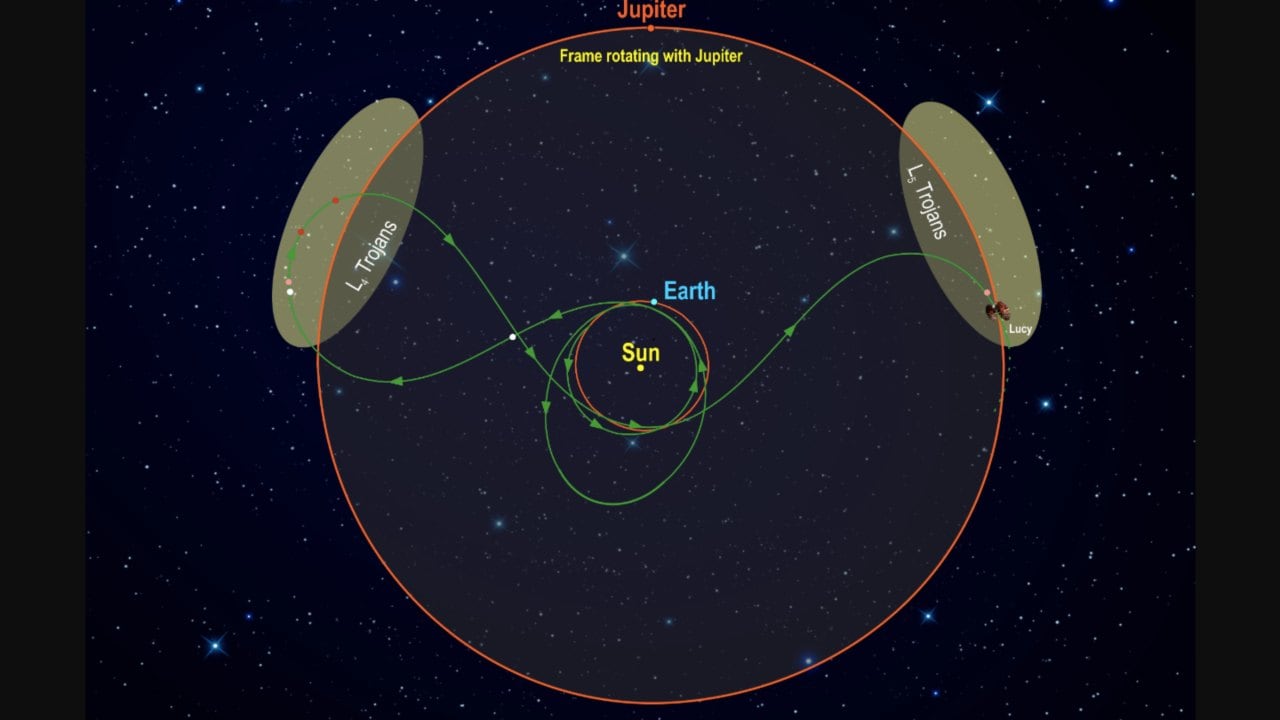 Lucy's target asteroids are clusters of rocks called the "Trojans", thought to be as ancient as the Sun itself. Making a quick stop at our system's Main Belt in 2025, the probe will flex its muscles and carry out a practice run of its instruments before powering through to reach its first four Trojan asteroids by 2027. Over the next five years, Lucy will study these and another pair of asteroids that orbit each other in a different cluster in Jupiter's orbit, winding up its planned mission in 2023.

However, over its 12-year mission, getting Lucy to each of its targets will be enormously complex.

With the solar system constantly in motion, plenty of gravitational forces along the way to tug at the probe (most of all from its target asteroids) and strange comets in-transit through our solar system every now and again, there's a lot that NASA scientists need to account for.

In earlier missions, spacecrafts have done fly-bys and orbits of multiple targets, but Lucy will be the first to bag six fly-bys and four gravity assists in a single mission.

The Flight Dynamics Team at NASA’s Goddard Space Flight Center is tasked with the job of sketching out the mission's wild path.

While fuel-intensive zig-zagging is a definite part of Lucy's flight plan, the NASA team has found a more resourceful means of manoeuvre the bulk of Lucy's mission: gravity assists.

“There are two ways to navigate a mission like Lucy,” Jacob Englander, the optimization technical lead for the Lucy mission, said in a statement.

“You can either burn an enormous amount of propellant and zig-zag your way around trying to find more targets, or you can look for an opportunity where they just all happen to line up perfectly.” An artistic representation of Lucy and the Trojans. Image courtesy: SWRI

Lucy will be flung into the solar system at a time when it can catch a boost from a unique planetary alignment on its way to Jupiter.

When a planet (or asteroid, in Lucy's case) is far biggest than an approaching probe, the planet doesn't react to the object in any way. Instead, probes like Lucy can enter the gravity wells of these planets, where it will gain speed and reduce its propellant use with every consecutive orbit before it expends its newly-acquired energy from the assist to change its trajectory in a new direction from its original approach.

While its flight path is now mapped, Lucy will need some extra help from mission control as it approaches its targets in the form of "OpNav" or optical navigation.

OpNav will use imagery from the spacecraft's onboard cameras to determine its position relative to its target. This gives the mission's navigation team important measurements to adjust Lucy’s route and make certain that it stays on its intended path. This, NASA will accomplish with the help of KinetX, which has been given the task of handling Lucy's navigation in deep space.

Some of these manoeuvers are tricky, not some are do-or-die critical to the mission as a whole. One such move is Lucy's first encounter with the Trojans.

“(Lucy) must encounter the Trojans at the intersection of the spacecraft and Trojan orbital planes,” Stanbridge said. “Changing the spacecraft orbital plane requires a lot of energy, so the manoeuvres need to be executed at the optimal time to reach to next body while minimizing the fuel cost.” And if all this doesn't pack enough danger and suspense, there's some amount of uncertainty that just can't be avoided. Lucy pinging data back to Earth can also be interrupted by blackouts that could last up to 30 minutes during some of its more elaborate manoeuvres, Stanbridge said in the statement.

“Other times you could lose communications would be when, for example, the Sun, comes between the Earth tracking station and the spacecraft, where the signal would be degraded by passing through the solar plasma."

The mission team is relying on cutting-edge predictions of the spacecraft's trajectory and quick course-corrections once communications are back online to weather through such events.

It's going to be a thrilling 12-year journey for Lucy.

And if all goes as planned, the spacecraft already has a pretty chilled-out retirement to look forward to: a whole lot of nothing.

“We’re just going to leave it out there,” Englander said. “We did an analysis to see if it passively hits anything, and looking far into the future, it doesn’t.”

A fitting reward for galavanting around our solar system to find us some answers about its origins, eh?