NASA's InSight seems to have landed at a slight angle, mission engineers not worried

NASA expects better images from InSight soon, once it sheds the dust covers protecting its cameras.

NASA's newest robot to find its feet on Mars, the InSight lander that landed on the Mars Monday, appears to have done so at a slight angle.

This poses a problem for NASA engineers only because the spacecraft is designed to carry out experiments from its stationary spot on the Elysium Planitia, the lander's new home for its two-year geology mission.

NASA's unmanned Martian quake sensor, InSight, has landed at a slight angle on the Red Planet, and experts are hopeful the spacecraft will work as planned, the US space agency said Friday.

"The vehicle sits slightly tilted (about 4 degrees) in a shallow dust- and sand-filled impact crater known as a 'hollow,'" NASA said in a statement. InSight flipped open the lens cover on its Instrument Context Camera (ICC) on 30 Nov to captured this view of Mars. Located below the deck of the Mars lander, the ICC has a fisheye lens, creating a curved horizon. Image courtesy: NASA

This isn't worrying the mission's engineers so far, because InSight was engineered to operate on a surface with an inclination up to 15 degrees. They are hopeful that the two main instruments on InSight – its quake sensor, and the self-hammering mole to measure heat escaping from Mars' surface – work as planned.

"We couldn't be happier," InSight project manager Tom Hoffman of NASA's Jet Propulsion Laboratory said according to the statement.

"There are no landing pads or runways on Mars, so coming down in an area that is basically a large sandbox without any large rocks should make instrument deployment easier and provide a great place for our mole to start burrowing." 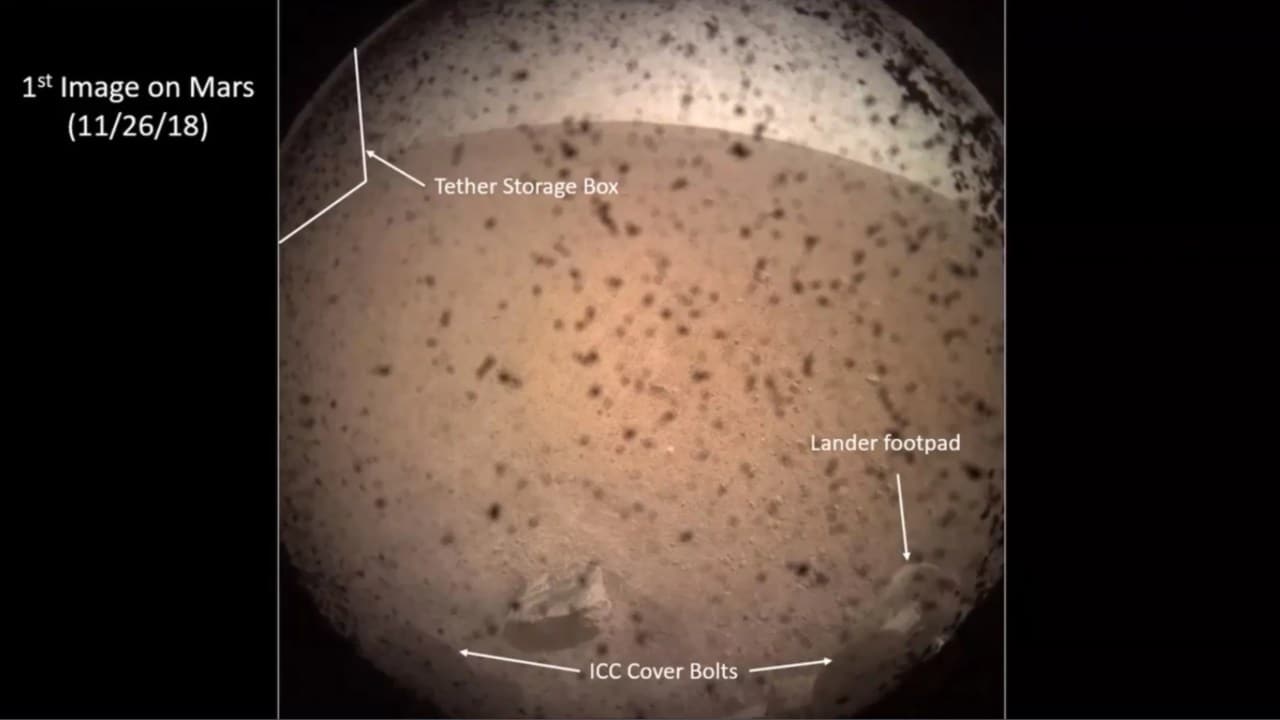 The first images sent back from InSight show just a few rocks in the vicinity, which is great since it makes routine procedures like deploying solar arrays and moving InSight's arms and instruments tricky.

NASA is expecting better images over the days to come, once InSight sheds the dust covers that are still protecting its two cameras.

"We are looking forward to higher-definition pictures to confirm this preliminary assessment," Bruce Banerdt, principal investigator of InSight at NASA, was quoted to have said.

"If these few images – with resolution-reducing dust covers on – are accurate, it bodes well for both instrument deployment and the mole penetration of our subsurface heat-flow experiment."

The $993 million Mars lander arrived and landed on target as intended on Mars' lava plains to better understand how Earth's neighboring rocky planet came to exist.

NASA's Mars InSight Spacecraft to liftoff on 5 May from California: Here's how to watch it live