The Ingenuity helicopter is only 1.8 kg in weight can be seen at a distance of four metres from the rover in the selfie

The National Aeronautics and Space Administration (NASA)'s Perseverance Mars rover has clicked a selfie on the red planet using its onboard camera called WATSON that is placed on the end of its robotic arm. In a blog post by Mars Exploration Program, NASA Science shares that as many as 62 individual images were stitched together in order to get this selfie of the rover with its small robotic helicopter Ingenuity. The image was shared on Twitter, the official handle of NASA’s Perseverance Mars Rover said that the image which is the first selfie of the mission was taken at Jezero Crater. The rover is also watching over Ingenuity as the helicopter is being prepared for its first flight. Signing off the tweet, the official account said, “Daring mighty things indeed.” 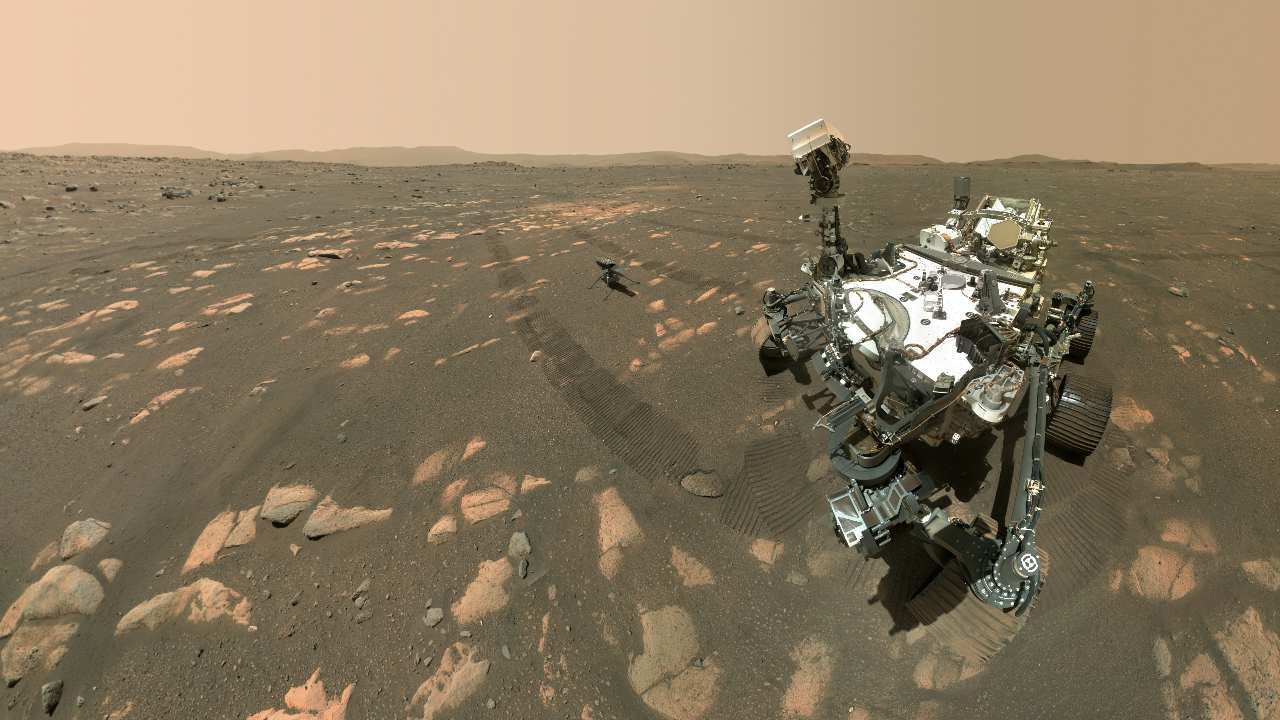 Recently, another of NASA's Mars rovers — Curiosity — shared a panoramic selfie with a majestic rock formation on Mars, known as Mont Mercou. The image was created from 60 individual images. This was taken on 26 March 2021, the 3,070th Martian day (sol), of Curiosity's mission on Mars by two cameras on the rover.

The Ingenuity helicopter is only 1.8 kg in weight can be seen at a distance of four metres from the rover in the selfie. Both Perseverance rover and Ingenuity landed on Mars on 18 February. Their selfie together was clicked on 6 April, according to the blog post. A camera called WATSON or Wide Angle Topographic Sensor for Operations and eNgineering and SHERLOC (Scanning Habitable Environments with Raman and Luminescence for Organics and Chemicals) were used to capture the images.

Two bots, one selfie. Greetings from Jezero Crater, where I’ve taken my first selfie of the mission. I’m also watching the #MarsHelicopter Ingenuity as it gets ready for its first flight in a few days. Daring mighty things indeed.

Ingenuity's first flight was first scheduled on 12 April but has to push back to 14 April due to technical issues with the helicopter's rotors. During its first flight, the rover is going to send instructions from NASA Jet Propulsion Laboratory (JPL) to the helicopter. After the first flight happens, using the Navigation Cameras and Mastcam-Z, the Perseverance rover is possibly going to downlink images, videos, and engineering data from Ingenuity. Through this data, the Ingenuity team will be able to ascertain if the first flight of the device on Mars was a success or not.

If the mission is a success, NASA will conduct another flight soon after.