"The flash was so powerful that it lit up the stream like a Christmas tree — it was a cataclysmic event!" said Principal Investigator Andrew Fox from STScI.

National Aeronautics and Space Administration (NASA) has revealed that a supermassive black hole at the center of Milky Way galaxy unleashed an enormous burst of energy about 3.5 million years ago.

The US space agency said that primitive people afoot on the African plains would have witnessed the explosion.

The black hole explosion is said to have been caused by a large hydrogen cloud up to 100,000 times the Sun's mass. As a result of the burst, cones of blistering ultraviolet radiation were sent above and below the plane of the galaxy and deep into space. 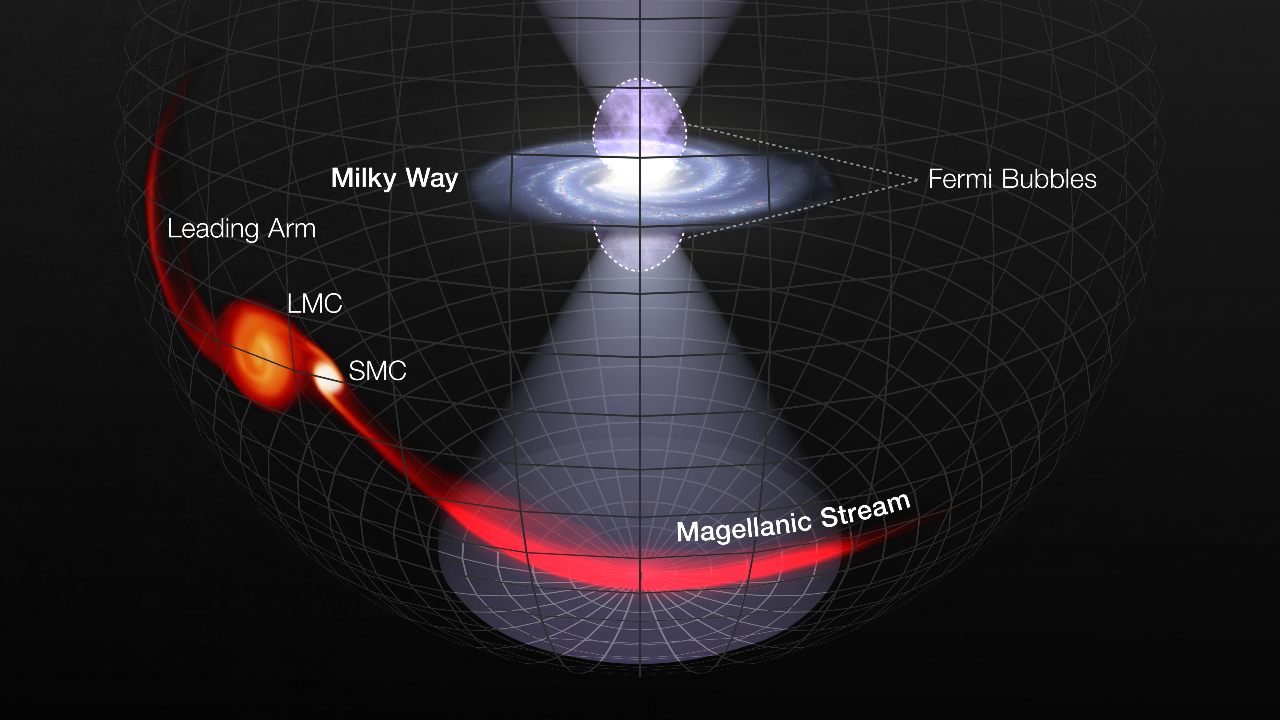 An enormous outburst from the vicinity of the Milky Way’s central black hole sent cones of blistering ultraviolet radiation above and below the plane of the galaxy and deep into space. The radiation cone that blasted out of the Milky Way’s south pole lit up a massive ribbon-like gas structure called the Magellanic Stream. Image credit: NASA, ESA and L. Hustak (STScI)

These radiation cones lit up a massive ribbon-like gas structure called the Magellanic Stream and the Small Magellanic Cloud.

"The flash was so powerful that it lit up the stream like a Christmas tree — it was a cataclysmic event!" said Principal Investigator Andrew Fox of the Space Telescope Science Institute (STScI) in Baltimore.

He added the events that took place shows that different regions of the galaxy are linked. This means if something happens in the galactic centre, its effects can be felt in the Magellanic Stream.

NASA has been using its Hubble Space Telescope to churn out more information about the outburst.

The telescope’s Cosmic Origins Spectrograph is capable of observing the fingerprints of ionized atoms in the ultraviolet light from the quasars. About 3.5 million years ago — just a blink of an eye in cosmic time — a tremendous explosion rocked the center of our galaxy. Our distant hominid ancestors, already afoot on the African plains, likely would have seen the resulting flare as a ghostly glow high overhead in the night sky. Image credit: NASA, ESA, G. Cecil (UNC, Chapel Hill) and J. DePasquale (STScI)

"When the light from the quasar passes through the gas we're interested in, some of the light at specific wavelengths gets absorbed by the atoms in the cloud," said STScI's Elaine Frazer, who analyzed the sightlines and discovered new trends in the data.

NASA also revealed that same event that caused the radiation flare also "burped" hot plasma that is now towering about 30,000 light-years above and below the plane of our galaxy.

As per a report in the SciTech Daily, the study, whose findings will be published in the Astrophysical Journal, was only possible because of the Hubble's unique ultraviolet capability. According to the report, ultraviolet light cannot be studied from the ground, because of the filtering effects of Earth’s atmosphere.

Scientists cannot see them if they work in the "optical and infrared" and that’s why they have to go to space to do this. "For this type of work, Hubble is the only game in town," he said.