The collection of samples is slated for 2020, with the spacecraft expected to return by September 2023.

After zeroing in on its target, asteroid Bennu, NASA's OSIRIS-REx spacecraft made a successful close-approach in December 2018. NASA has now announced that it has selected four specific sites on the asteroid for the spacecraft to touchdown and collect samples from — a key milestone in the mission's agenda.

Using close-up images captured of the spinning asteroid, OSIRIS-REx created a comprehensive map of its entire surface to identify the most accessible and safe spots to collect samples from. The mission is NASA's first effort to return samples from an asteroid.

Each of the chosen sites has also been given a name. The four candidate sample sites — Kingfisher, Nightingale, Osprey, and Sandpiper — have been named after birds native to Egypt. The final two sites — one as a primary, and a second site as a backup — will be chosen in December 2019 after studying them in greater detail, NASA said in a press release.

Another decision NASA is yet to make is how much material to collect from each site. This too has a bearing on how safe it will be for OSIRIS-REx be when it lands and gathers a sample from asteroid Bennu’s surface. There are multiple possible sampling regions in the Nightingale site. This spot mostly contains fine-grain, dark material and has the least reflection (albedo) and surface temperature of the four sites, NASA said. 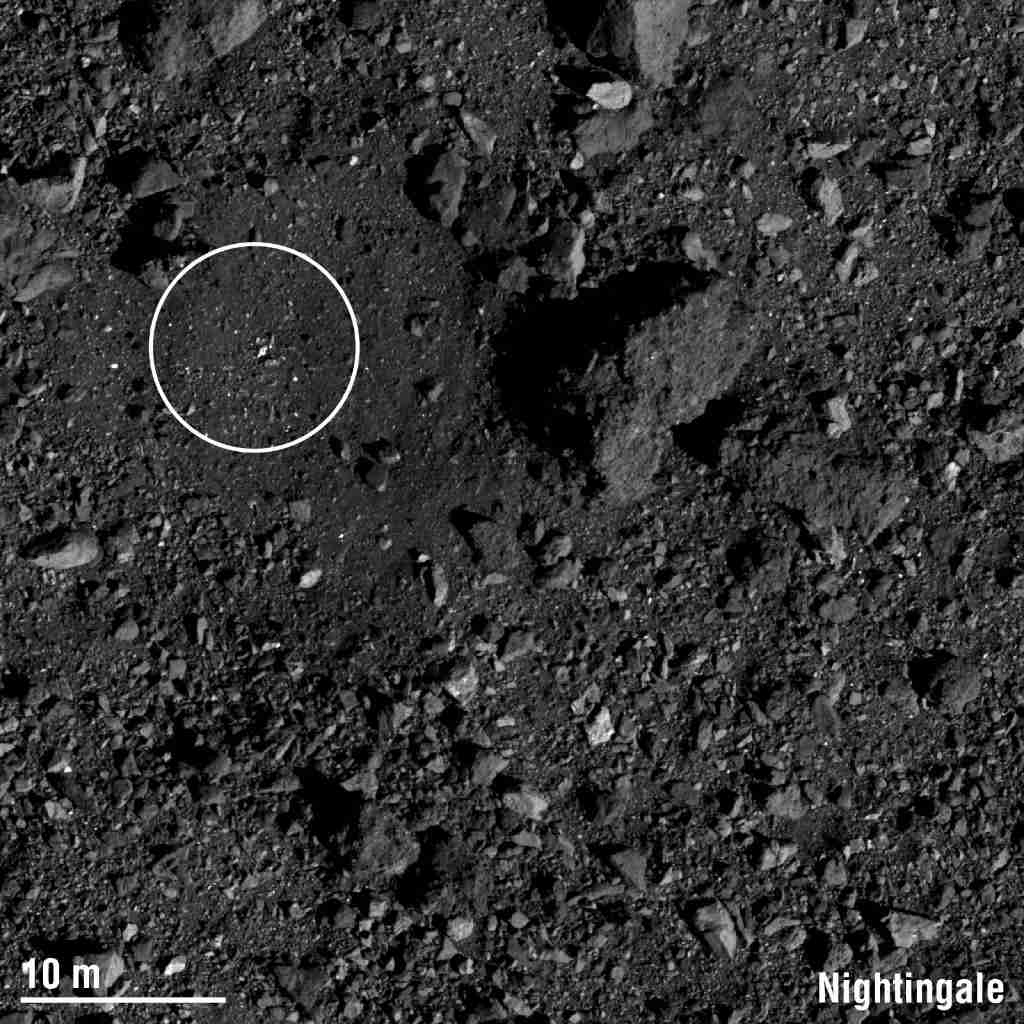 The Kingfisher site is tucked away inside a small crater, which has a diameter of 26 feet and is located near Bennu's equator. While it is surrounded by boulders that would otherwise make the spacecraft's approach risky, the site itself is free of large rocks. Of the four sites, Kingfisher has the strongest indicators for hydrated minerals. Set inside a different small crater on Bennu, but also on the asteroid' equatorial region, is the third candidate site Osprey. There are multiple potential sampling regions present here. The biggest thing Osprey has going for it is the strong carbon-rich signature from the rocky material present at the site — the highest of the four candidates. A study of rocks in the area surrounding it also suggests that Osprey's regolith (layer of loose sandy and rocky material covering the surface) could be particularly diverse. This could go a long way in studying asteroids, Bennu's composition and its origin. Located in Bennu's southern hemisphere, Sandpiper is a site on a relatively flat area on the wall of a large crater 63 m in diameter. The abundance of water signatures indicates that Sandpiper contains pristine, hydrated materials that might offer different findings than well-exposed, water-rich minerals on the space rock. A detailed analysis of the pros and cons of landing on each of the four chosen sites will be done over the next three months by the OSIRIS-REx team. The spacecraft will execute high overhead flybys over each of the sites from 1.29 km away to verify they are safe and have an accessible, sampleable regolith. More maps of features and landmarks on the asteroid will be constructed to feed the spacecraft’s autonomous navigation system to assist the landing sequence.

The sample collection itself is scheduled for the second half of 2020, with OSIRIS-REx scheduled to return to Earth with the samples on 24 September 2023.