Sometime this month, Sentinel-6 will be moved higher from an initial orbit to its operational orbit, where it will trail Jason-3 by 30 seconds so scientists can cross-check the data to ensure continuity.

Named for a late NASA official who had a key role in developing space-based oceanography, the satellite’s main instrument is an extremely accurate radar altimeter that bounces energy off the sea surface. The Sentinel-6 Michael Freilich satellite launched from Vandenberg Air Force Base in central California on Nov. 21. NASA's Eyes visualization tools lets you track the spacecraft as begins its mission to measure sea level height as it orbits Earth.
Credits: NASA/JPL-Caltech

Space-based sea level measurements have been uninterrupted since the 1992 launch of the U.S.-French TOPEX-Poseidon satellite.

The rate of sea-level rise has doubled since then to 0.16 inch (4 millimetres) per year, almost entirely due to the combination of meltwater from land-based glaciers and ice sheets and the fact that seawater expands as it warms, NASA said.

TOPEX-Poseidon familiarized the public with the concept of ocean surface topography with data turned into brightly coloured graphics of the globe showing warming and cooling watermarking weather-influencing El Nino and La Nina conditions. 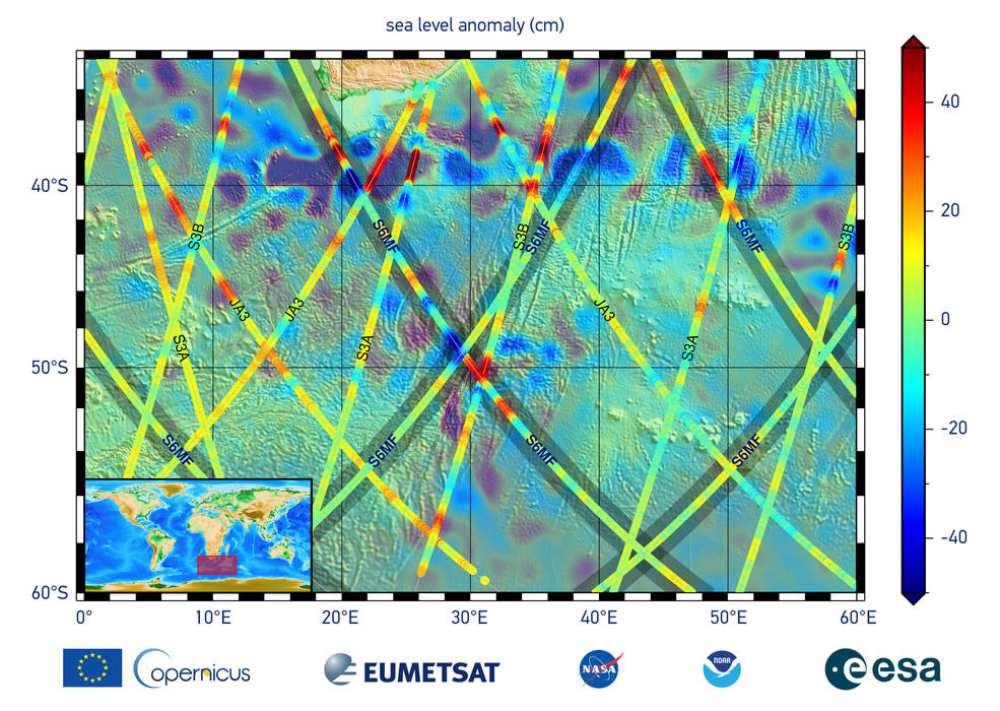 The data in this graphic are the first sea surface height measurements from the Sentinel-6 Michael Freilich (S6MF) satellite, which launched Nov. 21, 2020. They show the ocean off the southern tip of Africa, with red colors indicating higher sea level relative to blue areas, which are lower.
Credits: EUMETSAT

TOPEX-Poseidon was followed by a series of satellites including the current Jason-3.

Sometime this month, Sentinel-6 will be moved higher from an initial orbit to its operational orbit, where it will trail Jason-3 by 30 seconds so scientists can cross-check the data to ensure continuity. When that is assured, Sentinel-6 will become the primary satellite.

In addition to NASA, the mission involves the European Space Agency, the European Organization for the Exploitation of Meteorological Satellites, the European Commission, France’s National Center for Space Studies, and the U.S. National Oceanic and Atmospheric Administration.