NASA calls Africa fire continent, is home to 70 percent of all the world's fires

As the world has watched with fear and fascination the fires burning in Brazil’s Amazon rainforest, satellite images show a far greater number of blazes on the African continent.

NASA has called Africa the “fire continent” that’s home to at least 70 percent of the 10,000 fires burning worldwide on an average August day, though the agency says the number of fires is consistent from year to year.

While French President Emmanuel Macron has said he is considering launching an international campaign to help sub-Saharan African countries fight fires, experts say the situation there is different and not yet a growing problem — though it could become a threat in future. 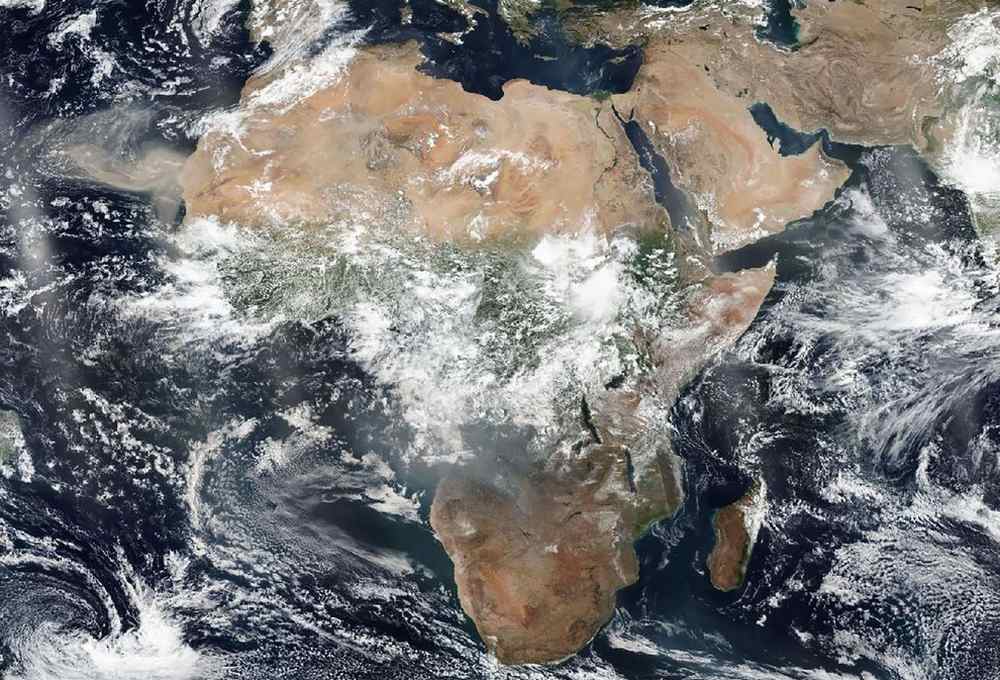 A satellite image that shows there is alot more fires burning in Africa than in the Amazon. Image credit: NASA/AP news

Angola had almost three times more fires than Brazil over a period last week, according to NASA satellite imagery, which indicated around 6,000 fires in Angola, more than 3,000 in Congo and just over 2,000 in Brazil.

Though Angola and Congo dominate in numbers of fires, they often occur in sparsely wooded savannas and on fields cultivated by small farmers, making them less of a concern for deforestation than those in the Amazon, said Sally Archibald, a professor at Wits University in Johannesburg.

“There are fire management questions in these (African) ecosystems, but fire is part of their ecology,” said Archibald, who studies fire management and savanna dynamics. “In South America, the equivalent non-forest woodlands have been largely converted to soybean agriculture already, but in Africa they are largely untransformed.”

Savanna fires release carbon dioxide, but within a year the grass regrows, sucking much of the carbon out of the atmosphere again. The fires may push toward the forests, but are mostly snuffed out at that border, Archibald said, unless trees are cut down making tropical forests more vulnerable. When a tropical forest is burned, the trees die and the carbon dioxide goes up and doesn’t return to the system quickly.

“The main message is: yes we have a lot of fire, but it’s not bad and can be very good for the ecology,” she said. “We don’t know how many deforestation fires we have but the best evidence is that our forests are not decreasing, they are in fact increasing.”

Most deforestation occurred in West Africa in the 19th century, Archibald said, adding that Cameroon and Gabon show increased forestation.

However, ecosystems such as the Miombo Woodlands, which covers 10 percent of the continent over nine countries, do need to be managed. These woodlands push up against forests and because of an increase in population, more people are planting crops along the edges. The Miombo Network, an advisory and sustainability group that Archibald is a member of, is working with the World Bank and policymakers to make sure there is proper fire management in these areas, she said.

“Fires are therefore often a critical component of these ecosystems and are not perceived as harmful by local communities,” he said. “Indeed, fires are often used for agricultural purposes, for example, to keep the landscape open to support livestock, as well as sometimes as part of shifting cultivation.”

Andela said deforestation isn’t occurring on the same scale as in South America.

“In part that may be simply due to limitations of existing infrastructure and lack of access to global markets, processes that drive large scale agricultural expansion elsewhere,” he said. “It is therefore certainly a possibility that this may change in future.”

Tosi Mpanu Mpanu, former chief negotiator for the Africa Zone at the 2015 United Nations climate change conference, said agricultural practices known as “slash and burn” need to be better managed, citing the over 3,000 fires in Congo.

“It is a great threat to our forests,” he said of the technique used by farmers in Congo and elsewhere in sub-Saharan Africa. “You need a global ambitious program or you train people to use other practices for people to go into intensive agriculture. You have to organize these small farmers by giving them fertilizer, seeds.” Deforestation in Africa is not as bad as it is in South America. Image credit: ICUN

The majority of those fires occur in tropical regions of Africa.

Using satellite data from the agency’s Copernicus program, researchers said in a December study that the total area burned in 2016 was 4.9 million square kilometers. Most of the fires are 100 hectares or smaller in size.

Other areas with extensive biomass burning are Australia, South America and Southeast Asia.

Globally, the amount of area burned declined by about 25 percent over the past two decades, largely because of savannas and grasslands being converted to agriculture, said James Randerson, an earth systems scientist at the University at California, Irvine.

Randerson said the tropical forests of Africa have yet to see widespread deforestation driven by industrial-scale agriculture that is transforming parts of the Amazon. But, he said, global economic forces could potentially change this as countries in East Asia, particularly China, seek to expand trade relations with African nations.

“That could put more pressure on the African forests,” Randerson said.