NASA wants to expand its human & robot missions to Mars & the moon with "Space Exploration Campaign".

Revealing its human explorations plans, NASA has told the US Congress that the agency is currently focusing on developing technologies and systems that enable a series of human and robotic lunar missions that are extensible to Mars.

The "National Space Exploration Campaign" that NASA submitted to the Congress on 24 September calls for human and robotic exploration missions to expand the frontiers of human experience and scientific discovery of the natural phenomena of Earth, other worlds and the cosmos, the US space agency said in a statement on Thursday.

The campaign has five strategic goals, including returning US astronauts to the surface of the Moon to demonstrating the capabilities required for human missions to Mars and other destinations. NASA said it intends to transition from the current model of human space activities in low-Earth orbit to a model where the government is only one customer for commercial services.

The US space agency is building a plan for Americans to orbit the Moon starting in 2023, and land astronauts on the surface no later than the late 2020s.

A key component of establishing the first permanent American presence and infrastructure on and around the Moon is the Gateway, a lunar orbiting platform to host astronauts farther from Earth than ever before, NASA said.

Some elements of the Gateway already are under construction at NASA centers across the United States, including facilities in Ohio, Texas and Alabama, and at commercial partner facilities. 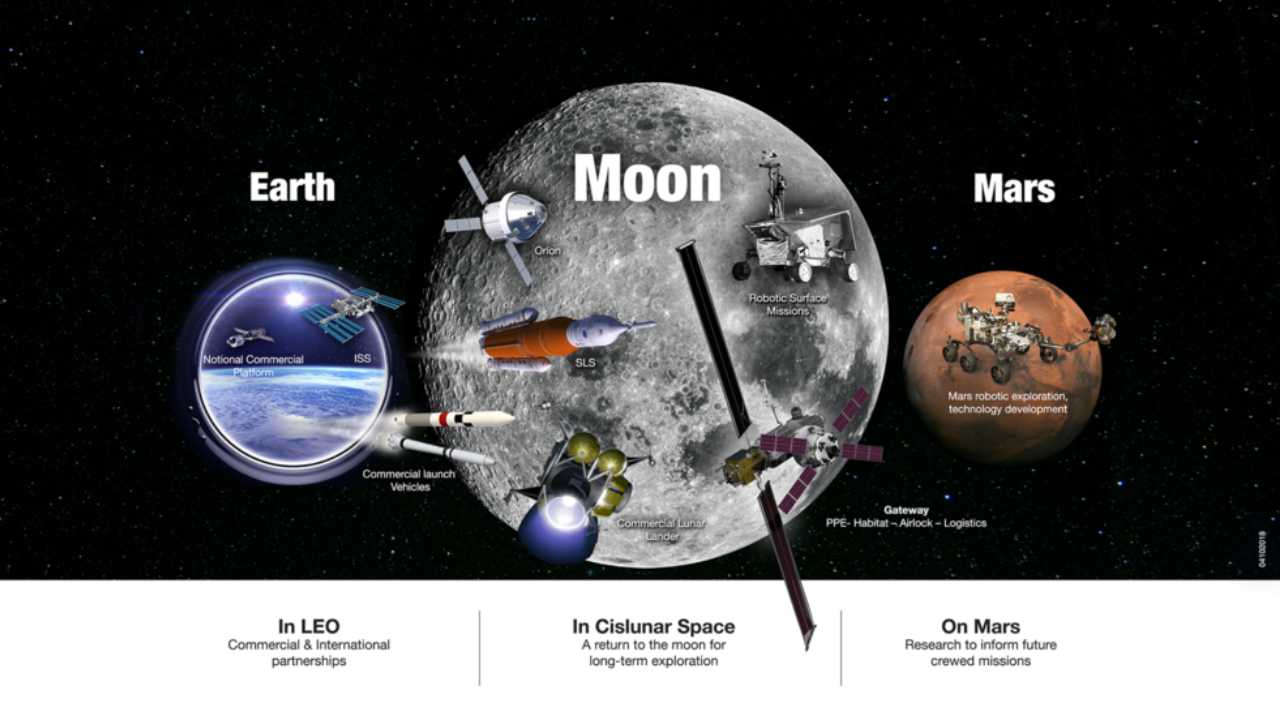 NASA's Exploration Campaign puts it in a unique position of leadership in the low-Earth orbit, orbit around the Moon, on its surface, and other destinations, including Mars. Image courtesy: NASA

The Gateway will be assembled in space, incrementally, using the Orion spacecraft and SLS, as well as commercial launch vehicles. The first element, providing power and propulsion, will launch from Florida in 2022, NASA added in the statement.

"The lunar surface will serve as a crucial training ground and technology demonstration test site where we will prepare for future human missions to Mars and other destinations," NASA said, adding that by the late 2020s, a lunar lander capable of transporting crews and cargo will begin trips to the surface of the Moon.

NASA said its series of crewed missions to Mars, planned to start in the 2030's and culminating in a surface landing, would be supported by the work it does on the Moon in the coming years.