More than two-thirds of the populations in China, India, Thailand are at risk due to rising sea levels

Major storms that used to happen once a century will happen on average once a year in many places.

Coastal areas currently home to 300 million people will be vulnerable by 2050 to flooding made worse by climate change, no matter how aggressively humanity curbs carbon emissions, scientists said Tuesday.

By mid-century and beyond, however, choices made today will determine whether Earth's coastlines remain recognisable to future generations, they reported in the journal Nature Communications.

Destructive storm surges fuelled by increasingly powerful cyclones and rising seas will hit Asia hardest, according to the study. Residents wade across a flooded street with their belongings to relocate to a safer place due to overflowing Krishna river during monsoon season, in Sangli. Image credit: PTI

More than two-thirds of the populations at risk are in China, Bangladesh, India, Vietnam, Indonesia and Thailand.

Using a form of artificial intelligence known as neural networks, the new research corrects ground elevation data that has up to now vastly underestimated the extent to which coastal zones are subject to flooding during high tide or major storms.

"Sea-level projections have not changed," co-author Ben Strauss, chief scientist and CEO of Climate Central, a US-based non-profit research group, told AFP.  "But when we use our new elevation data, we find far more people living in vulnerable areas that we previously understood."

With the global population set to increase two billion by 2050 and another billion by 2100 — mostly in coastal megacities — even greater numbers of people will be forced to adapt or move out of harm's way.

Already today, there are more than 100 million people living below high tide levels, the study found.

Some are protected by dikes and levees, most are not.

"As the tideline rises higher than the ground people call home, nations will increasingly confront questions about whether, how much and how long coastal defences can protect them."

One is the expansion of water as it warms and, more recently, ice sheets atop Greenland and Antarctica that have shed more than 430 billion tonnes per year over the last decade.

Since 2006, the waterline has gone up nearly four millimetres a year, a pace that could increase 100-fold going into the 22nd century if carbon emissions continue unabated, the UN Intergovernmental Panel for Climate Change (IPCC) warned in a major report last month. 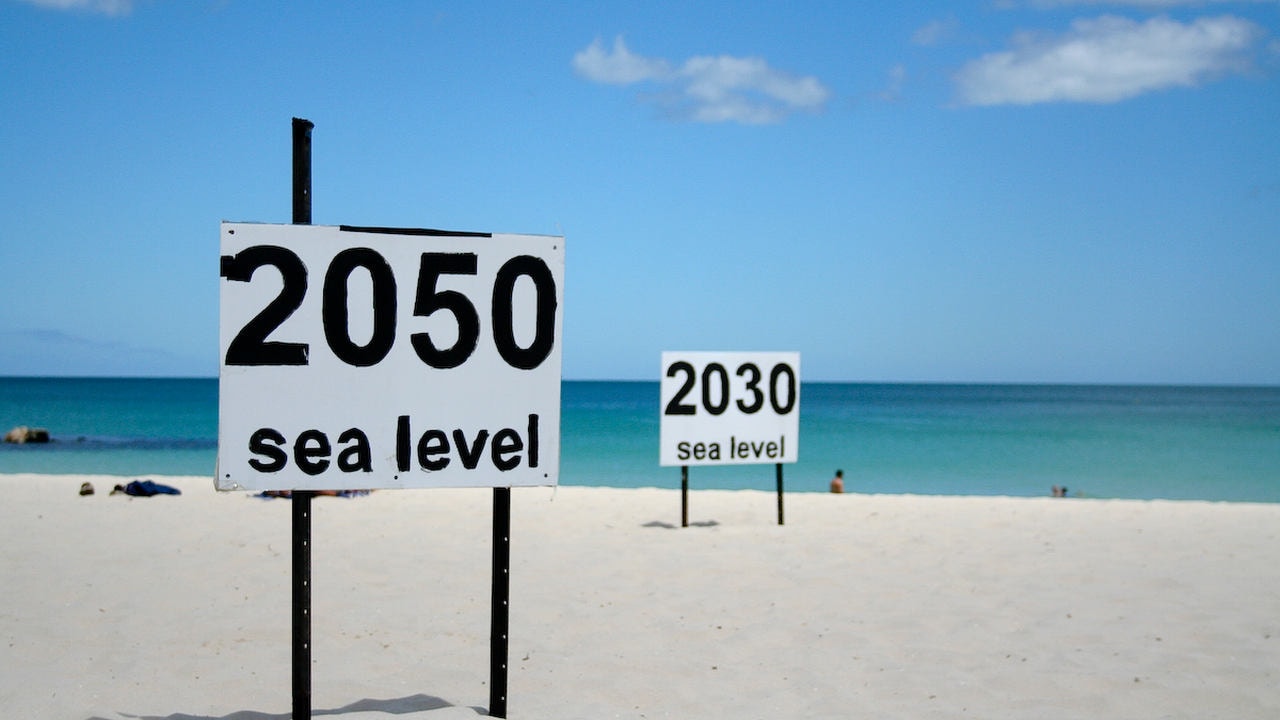 If the rise in temperatures are capped at Paris treaty level, the sea level will still projected to rise about half-a-metre by 2100. Image credit: Flickr/Go greener oz

If global warming is capped below two degrees Celsius — the cornerstone goal of the Paris climate treaty — sea level is projected to rise about half-a-metre by 2100.

At current rates of carbon pollution however, the increase would be nearly twice as much.

A second ingredient is tropical storms — typhoons, cyclones or hurricanes — amplified by a warming atmosphere.

"It doesn't take a big rise in sea level to lead to catastrophic problems," said Bruce Glavovic, a professor at Massey University in New Zealand who was not involved in the study.  "Sea level rise is not a slow onset problem — it's a crisis of extreme weather events."

Major storms that until recently occurred once a century will, by 2050, happen on average once a year in many places, especially in the tropics, the IPCC report found.

Finally, many of the one billion people living at less than nine metres above sea level today are in urban areas literally sinking under their own weight.

Researchers studying the impact of rising seas on human settlements have long known that the Shuttle Radar Topography Mission (SRTM) data provided freely by NASA has a fairly wide margin of error. But about five years ago Kulp and Strauss realised that — compared to more accurate data for the US gathered by laser-based systems on aircraft — SRTM was systematically showing elevations to be higher than they actually were.

A big part of the problem was that the NASA system mistook rooftops and trees for ground level.

"It turns out that for most of the global coast we didn't know the height of the ground beneath our feet," said Strauss.

The researchers detailed these shortcomings and the merits of their new system, called CoastalDEM, in peer-reviewed journals before matching them to populations data in the new study.