Moon's colourful mineral map revealed with 1,50,000 photographs of the Supermoon

This image shows how the Moon might appear if our eyes & brain were way more sensitive to color.

After sweeping the planet off their feet with his ultra high-res photograph of the supermoon in February, amateur astrophotographer Andrew McCarthy is back with another wowzer.

McCarthy became a minor Reddit celebrity after his last image – a composite of 50,000 individual photographs of the Supermoon in February 2019. The final image was sharp enough for all the medium and large craters on the Moon's lit side to be visible clearly at maximum resolution. Little did we know that he was working on another project alongside it at the time – a map of the moon's geological makeup, in colour and much greater detail than his last photograph.

McCarthy's newest photograph has colour data from 1,50,000 photos of the Moon, and the artistic 64-megapixel Moon photo is even more stunning than the first. The photograph peels back the Moon's many layers, revealing its "hidden colours" unlike in his last project.

"The colour was already in that picture, hidden behind the glare of the moon’s (shiny surface)... (it) represents the mineral content of our moon,” McCarthy writes in a Reddit post.

All it took were some adjustments to the earlier image to bring out the features and colours that are visible in this second image, McCarthy said in a comment.

“While my previous images showed you the detail you could see if your eyes were sharper, this one shows you what the moon could look like if our eyes and brain were much more sensitive to colour," he added.

Regions that appear blues are where the surface has large amounts of titanium in its basalt form, while oranges are where there are low levels of basalt. 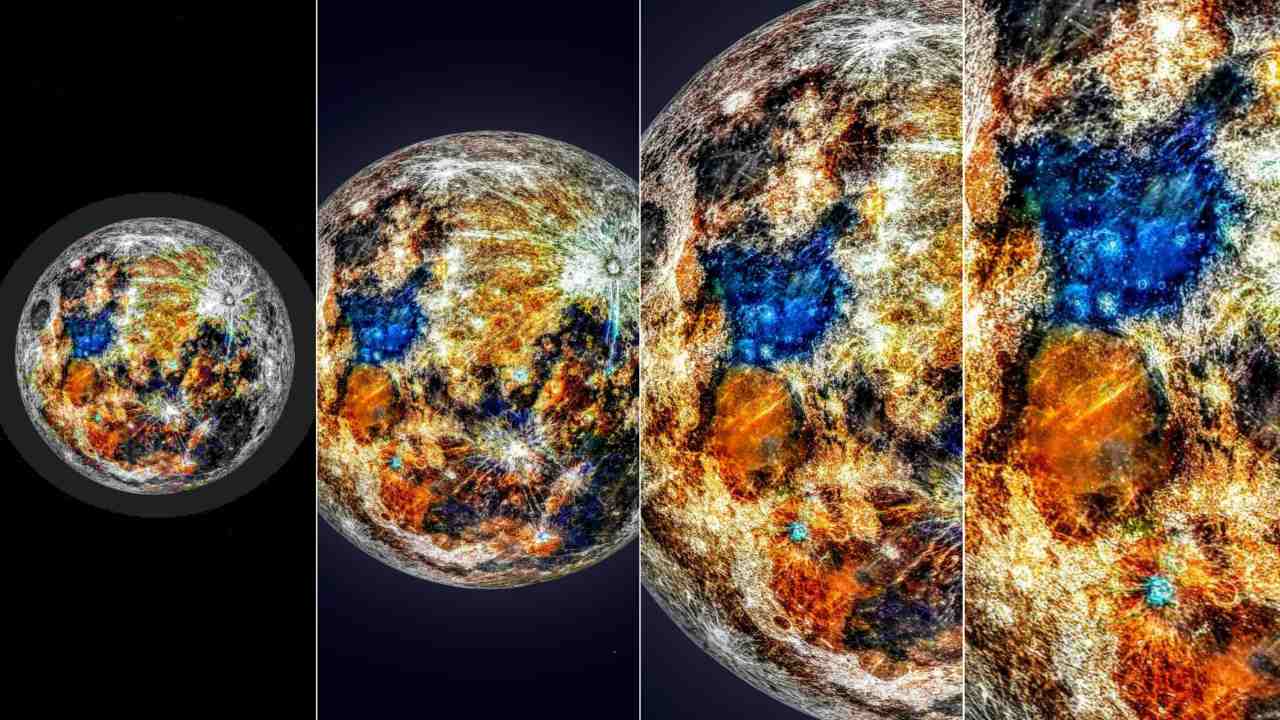 McCarthy captured the original image using two different cameras – one to capture the colours, stars and atmospheric haze, and another to capture the surface details and textures on the Moon's surface.

The photographs were then stacked and stitched together. Since multiple shots had to be taken to keep the noise and blurring caused by atmospheric turbulence to a minimum, McCarthy claims that the accuracy of even subtle colourations in the image was very high.

On top of the high-res photographs, which McCarthy has made available for download as an 11 MB JPG file and a 23 MB PNG file, he has also thrown in a charming bonus – an animation of the moon playing hide-and-seek-my-colour.

Here's the moon slowly revealing its geological innards for the world to see:

This is the latest addition to a large collection of photographs that McCarthy has taken of space. Among his other popular images are the Andromeda galaxy and the Moon, the International Space Station, and the Blood Moon.

Considering the future of humanity could go the way of Mars in the near future, perhaps we'll soon see McCarthy paint the Red Planet in pixels, too?