The Sun likely won't come to our rescue by cooling of the global climate, study says.

The sun has been acting weird for the past decade.

Sunspot activity has been at its minimum since 1800 and the weakening of the Sun’s activity has caused speculation that a mini-ice age is on the anvil and that disastrous effects of human-induced global warming could be partially offset by global cooling.

A team of scientists from the Center of Excellence in Space Sciences and Department of Physical Sciences at Indian Institute of Science Education and Research (IISER) Kolkata led by Prantika Bhowmik and Professor Dibyendu Nandi have dismissed the speculation and claim that the upcoming sunspot cycle is going to be stronger.

They have published their findings in journal Nature Communications. 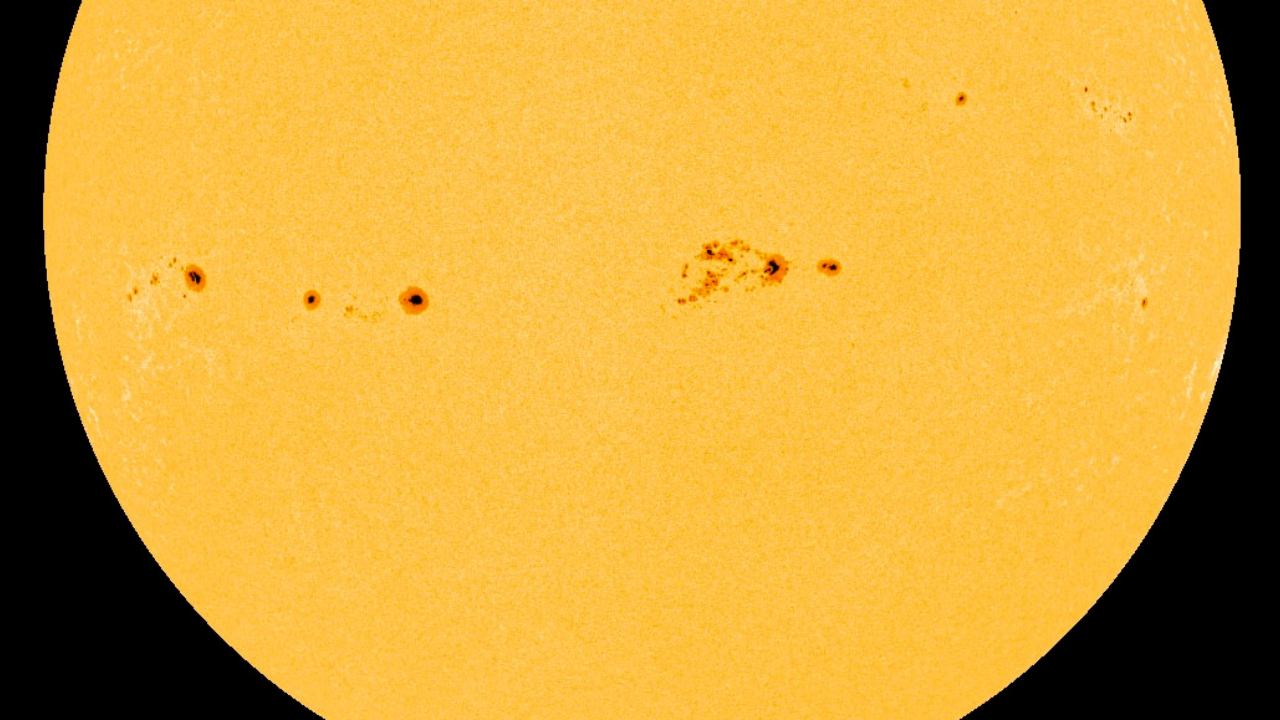 Sunspots larger in size than the Earth itself. Image: NASA Goddard

“The near-Earth and inter-planetary space environmental conditions and solar radiative forcing of climate over the upcoming sunspot cycle 25 will likely be similar or marginally more extreme relative to what has been observed during the past decade over the current solar cycle,” said Bhowmik.

Since the time of Galileo, sunspots have been observed and counted. They have been found to increase in number and intensity in an 11-year cycle associated with the periodic flipping of the north and south poles of the Sun. Since the Sun rotates faster at its equator than at the poles, magnetic fields twist and tangle producing sunspots, prominence, and sometimes flares and plasma explosions. A typical sunspot is about ten times the size of Earth and magnetic field ten thousand times stronger. After a passage of time, twisted and tangled magnetic field lines finally snap, triggering the next cycle.

From 1755, astronomers are systematically observing sunspots, and the current Solar Cycle 24 began in December 2008. This has been the weakest cycle in the last hundred years. At its peak, it sported just 82 spots compared to the previous cycle which had 181. Further last few cycles have been showing a trend of weakening. Many speculated that continuing this trend, the next cycle will also be weaker, leading perhaps to a decade-long mini-ice age.

Samir Dhurde of Public Outreach Committee of Astronomical Society of India said “the exact mechanism of the production of magnetic sunspots are complex and cannot be observed directly with a telescope. We use modeling to solve a set of complicated mathematical equations using the knowledge of physics, and create computer simulations to predict, match it with observation to see if the modelled prediction matches with the observation.”

“We developed the model and tested for the observed values covering the period 1913–2016 – from solar cycle 15 to the current cycle 24, and except for the mismatch of the reconstruction for the minimum of cycle 18, our model has been on the mark,” pointed our Professor Dibyendu Nandi. “Our method makes it possible to make predictions almost a decade before the next sunspot cycle activity peaks in strength”

Professor Somak Raychaudhury, Director, Inter-University Centre for Astronomy and Astrophysics (IUCAA), Pune says "the behaviour of magnetic field, and particles emitted from the Sun has a profound effect on the Earth’s climate and living conditions of inhabitants, as well as other activities that involve long-range communication and satellite technology. Normally we assume that these effects are too complex for us to predict and restrict ourselves from reacting to these phenomena as best we can. Bhowmik and Nandy’s models show considerable predictive power, and it looks like we will now be able to predict the fluctuations in solar activity much more reliably.”

The projected prediction shows that space environmental conditions over the next decade would be similar or slightly harsher compared to the last decade, belying expectation that the next cycle will be even weaker. They expect the next cycle to start rising in about a year following the end of the current sunspot cycle minimum and peak in 2024.

“This effectively rules out the Sun coming to our rescue via a cooling of the global climate,” said Dhurde.