Children across Asia and the Pacific kicked off what are set to be the largest global climate protests in history Friday, demanding adults act now to stop an environmental disaster. From Sydney to Seoul, Manila to Mumbai, children heeded the rallying cry of fellow teen activist Greta Thunberg and shut their textbooks in a collective call to action.

In Australia, more than 3,00,000 kids, parents, and supporters rallied, organisers said, more than double the turnout at climate strikes in March, and among the first of 5,000 events planned worldwide by the Fridays for Future movement. They are demanding politicians and businesses take drastic action to stop global warming, which scientists warn will lead to environmental catastrophe on current trends.

The day of protests is already eclipsing crowd numbers seen in strikes last May and will culminate in New York, where 1.1 million students in around 1,800 public schools have been permitted to skip school.

On the eve of the strikes, Thunberg — a 16-year-old Swede who has become emblematic of generational tensions over management of the planet — insisted solutions were being "ignored" and called on kids to take ownership.

"Everything counts, what you do counts," she said in a video message to supporters. As the sun rose above the international dateline, events began in the deluge-threatened Pacific Islands of Vanuatu, the Solomons and Kiribati -- where children chanted "We are not sinking, we are fighting".

There was a similar sense of defiance across Asia. "We are the future and we deserve better," 12-year-old Lilly Satidtanasarn — known as "Thailand's Greta" for her campaigning against plastic bags in malls — told AFP in Bangkok. The adults "have just been talking about it, but they're not doing anything," she said. "We don't want excuses."

In India, schoolchildren rallied in New Delhi and Mumbai while thousands protested in the Philippines, which experts say faces threats from rising sea levels and increasingly violent storms.

"There are a lot of people here who can feel the effects of climate change already, for example with typhoons," Yanna Palo, 23, told AFP at a rally in the capital Manila. "I don't know if we're on the frontline of the fight against climate change, but I hope so." 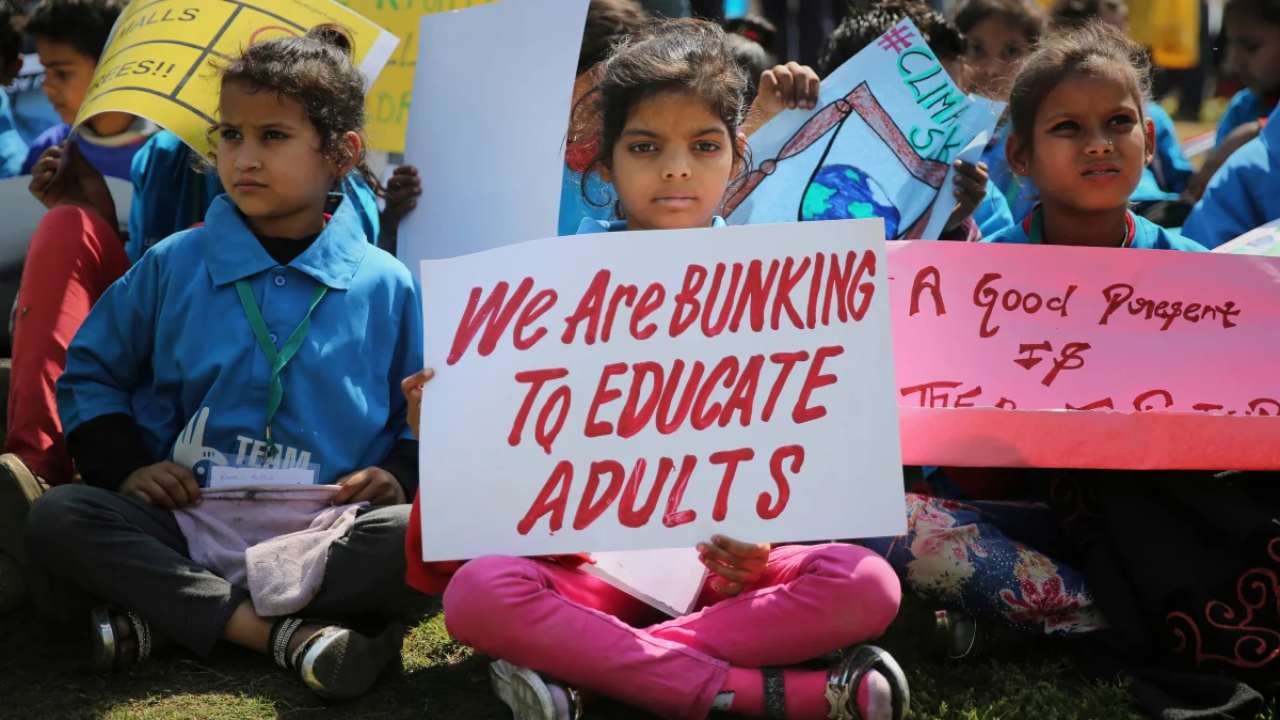 From the climate strike in Delhi in September 2019. AP

In Australia, while some local authorities, schools, and businesses encouraged people to take part in the strikes, some have warned that absences must be explained. Many Australian students remain undeterred.

"We're here to send a message to people in power — the politicians, showing them that we care and this is really important to us," said 16-year-old Will Connor. "Otherwise we're not going to have a future."

The hottest, most dusty continent finds itself at the sharp end of the climate debate and the changing environment has become a daily fact of life. Australia is one of the world's largest coal exporters and continues to approve massive new mines that bring jobs and have spurred three-decades of uninterrupted economic growth. But it has also suffered the compounding effects of climate change. Recent years have brought historic droughts, more intense bushfires, devastating floods and the blanching of the Great Barrier Reef.

Australia's conservative government — while stopping short of outright climate change denial — has sought to frame the debate as a choice between jobs or abstract CO2 targets. Ruling coalition parliamentarian Craig Kelly on Thursday warned children that "everything you're told is a lie".

"The facts are, there is no link between climate change and drought, polar bears are increasing in number," he said. An increasing number of businesses disagree.

"See you on the streets" was the defiant message from Australian pension fund Future Super, which helped muster 2,000 companies behind "not business as usual" pro-strike campaign. In a similar vein, Amazon chief Jeff Bezos on Thursday pledged to make the US technology and retail giant carbon neutral by 2040 and encourage other firms to do likewise.

Friday's mass action sets the scene for a range of high-profile climate events in New York. A Youth Climate Summit will take place at the United Nations on Saturday. UN Secretary-General Antonio Guterres will then host an emergency summit on Monday in which he will urge world leaders to raise their commitments made in the 2015 Paris climate accord.

The agreement saw countries pledge to limit the long-term rise in the average temperature of the Earth to two degrees Celsius over pre-industrial levels, and if possible, to 1.5 degrees Celsius. A landmark UN report to be unveiled next week will warn that global warming and pollution are ravaging Earth's oceans and icy regions in ways that could unleash misery on a global scale.

The scientific report from the Intergovernmental Panel on Climate Change (IPCC) will be put to a gathering of experts from 195 countries meeting in Morocco from Friday.

Global Climate Strike 20 Sept: Where will you be when the world demands urgent climate action?

Reasserting proper relationships of accountability in the Age of Greta

Global Climate Strike: A look at the strike that is demanding climate action today