While these structures have captured the imagination and attention of many scientists and astrophysicists, the source of these bubbles is still unknown.

In a remarkable first, astronomers have observed visible light from the two enormous outflows of high-energy gas,  known as the Fermi bubbles, in our Milky Way galaxy.

The research was carried out by scientists at the University of Wisconsin-Madison, UW-Whitewater and Embry-Riddle Aeronautical University. They announced their findings on 3 June at the 236th meeting of the American Astronomical Society, which was held virtually for the first time since 1899 due to the coronavirus pandemic.

Scientists measured the emission of light by hydrogen and nitrogen gasses in the Fermi bubbles at the same location as a recent ultraviolet absorption calculation made by the Hubble Space Telescope.

"We combined those two measurements of emission and absorption to estimate the density, pressure and temperature of the ionized gas, and that lets us better understand where this gas is coming from," Dhanesh Krishnarao, lead author of the new study, told University of Wisconsin-Madison press. 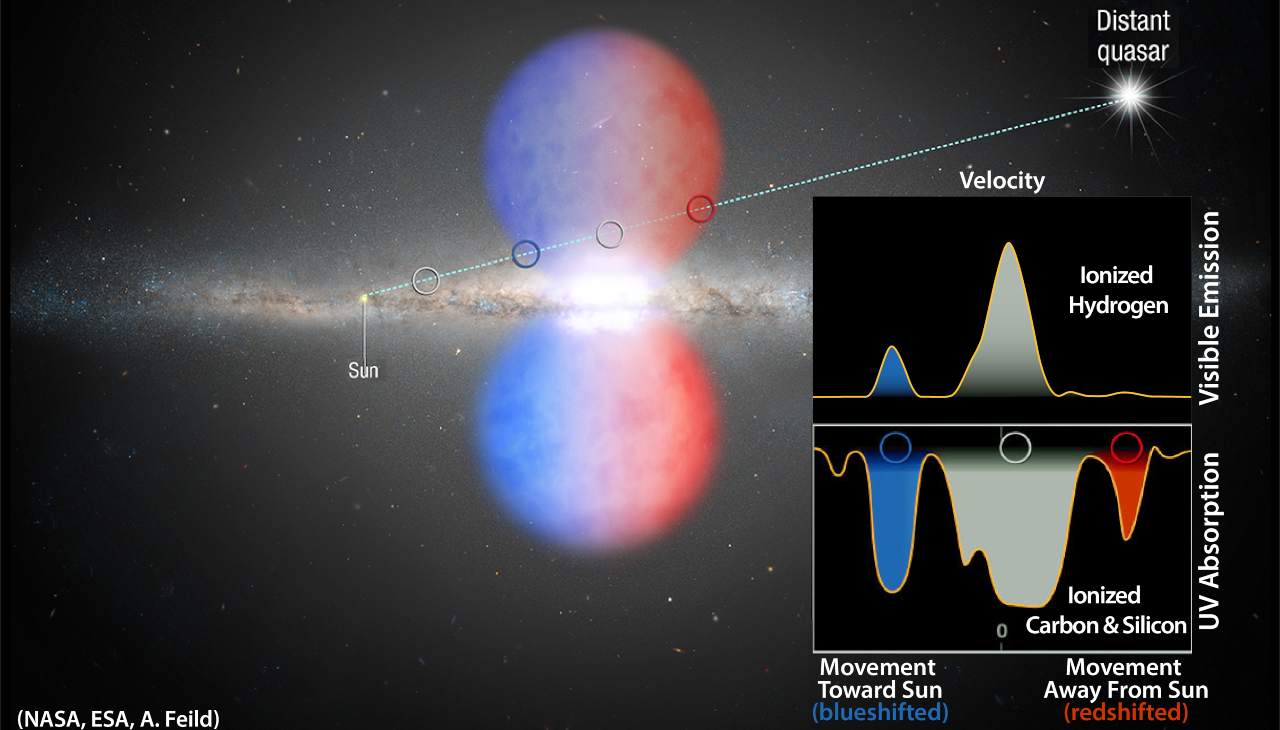 Astronomers used the WHAM telescope to measure huge outflows of gas extending from the Milky Way’s center known as the Fermi Bubbles. They were able to measure the velocity, density and pressure of the gas for the first time, confirming and extending previous measurements made using a distant quasar as a light source to look through and measure the gas. Image: Dhanesh Krishnarao/NASA

The Fermi bubbles, which were first spotted in 2010, spew out light in the form of a highly-energetic radiation called gamma rays. The towering structures – each of which is around 25,000 light-years tall – are considered to be relics of an ancient outburst of gas from the galaxy’s center. While these structures have captured the imagination and attention of many scientists and astrophysicists, the source of these bubbles is still unknown.

Scientists have theorized that the outflow could have been the result of the black hole at the center of the galaxy, or emissions caused by high-energy explosions during stars formation.

"The other significant thing is that we now have the possibility of measuring the density and pressure and the velocity structure in many locations," with the all-sky WHAM telescope, says Bob Benjamin, a professor of astronomy at UW-Whitewater and co-author of the study.

The study revealed that within the bubbles, gas is expanding outward, its motion altering the apparent wavelength of its light. Material that is closer to our solar system is moving toward it, appearing bluer in the image, while more distant gas is moving away, appearing redder.

The American space agency National Aeronautics and Space Administration (NASA) has stated that a supermassive black hole at the center of Milky Way galaxy unleashed an enormous burst of energy about 3.5 million years ago. The black hole explosion is said to have been caused by a large hydrogen cloud up to 1,00,000 times the Sun's mass. The explosion set cones of blistering ultraviolet radiation above and below the plane of the galaxy – stretching far and wide into space.

Could this stunning relic be related to this extraordinary event?

There's an open question begging for an answer.