The blue particles lapis lazuli were semi-precious stones that were highly prized at the time.

About 1,000 years ago, a woman in Germany died and was buried in an unmarked grave in a church cemetery. No record of her life survived, and no historian had reason to wonder who she was. But when modern scientists examined her dug-up remains, they discovered something peculiar — brilliant blue flecks in the tartar on her teeth.

And that has cast new light on the role of women and art in medieval Europe.

The blue particles, it turns out, were lapis lazuli, a semi-precious stone that was highly prized at the time for its vivid color and was ground up and used as a pigment.

From that, scientists concluded the woman was an artist involved in creating illuminated manuscripts — a task usually associated with monks.

The discovery is considered the most direct evidence yet of a particular woman taking part in the making of high-quality illuminated manuscripts, the lavishly illustrated religious and secular texts of the Middle Ages. And it corroborates other findings that suggest female artisans were not as rare as previously thought. This undated photo released by the Max Planck Institute for the Science of Human History in Jena, Germany, shows a piece of lapis lazuli. Image: AP

“It’s kind of a bombshell for my field — it’s so rare to find material evidence of women’s artistic and literary work in the Middle Ages,” said Alison Beach, a professor of medieval history at Ohio State University. “Because things are much better documented for men, it’s encouraged people to imagine a male world. This helps us correct that bias. This tooth opens a window on what activities women also were engaged in.”

Though her name remains unknown, the woman buried in the German churchyard was probably a highly skilled artist and scribe.

Ultramarine, as the powdered form of lapis lazuli is known, was the finest and most expensive pigment in medieval Europe, more valuable even than gold. The stone came from a single source: the mines of Afghanistan. Because of the cost of carrying it to Europe, ultramarine was reserved for the most important and well-funded artistic projects.

“If she was using lapis lazuli, she was probably very, very good,” said Beach, co-author of a report published on 9 January in the journal Science Advances. “She must have been artistically skilled and experienced.” 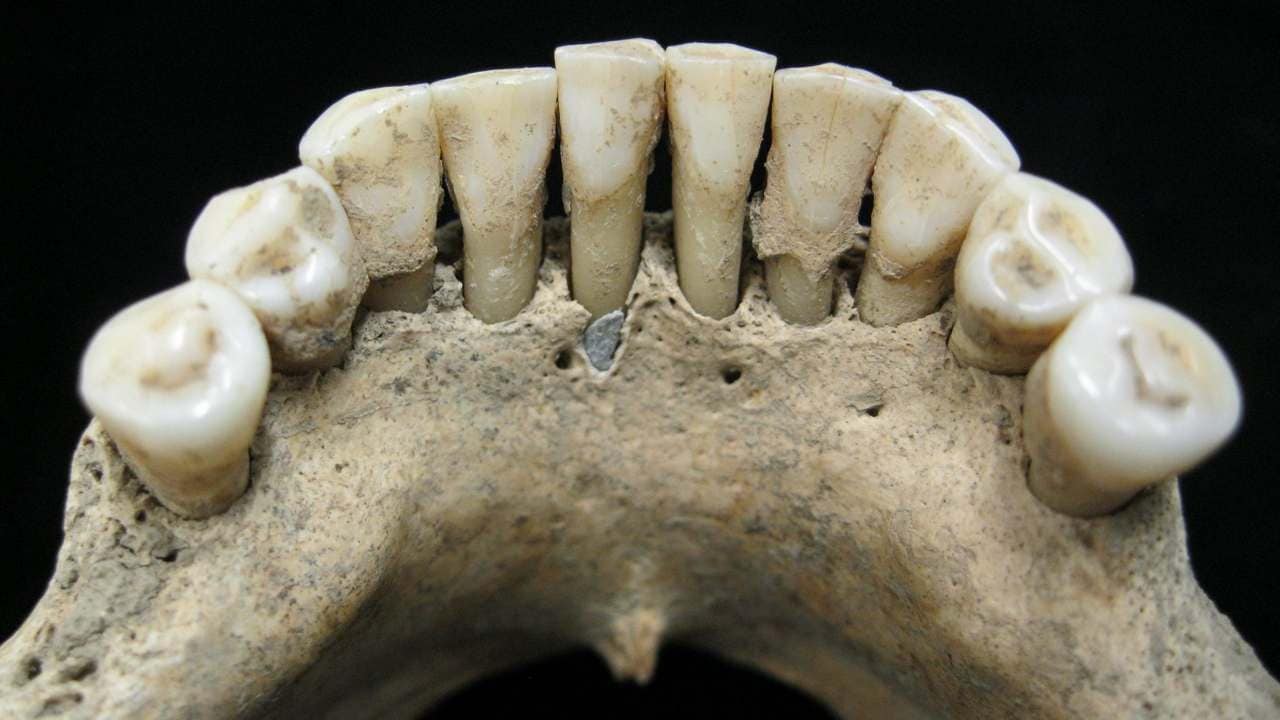 This undated photo released by the Max Planck Institute for the Science of Human History in Jena, Germany, shows the dental calculus on the lower jaw where a medieval woman entrapped lapis lazuli pigment, seen below center tooth. Image: AP

The researchers pored over old painting manuals to form a hypothesis as to how the woman got blue flecks in her teeth: She periodically licked the tip of her brush to bring it to a fine point for detailed work.

“If you picture someone in the Middle Ages making a fine illuminated manuscript, you probably picture a monk — a man,” Beach said. That’s in part because monasteries kept better records than female religious organizations did, and because men were more likely to sign their works, she said.

In recent years, scholars have identified indirect documentary evidence that women participated in making the expensive, handcrafted books that religious communities used before the invention of the printing press. For instance, a 12th-century German letter commissioned a liturgical book to be produced by “sister ‘N.’”

The scientists arrived at the latest discovery by accident. A building renovation in 1989 uncovered the woman’s tomb, along with those of other women who were apparently part of a female religious community attached to the church. Radiocarbon dating of the skeleton revealed the 45- to 60-year-old woman died between 997 and 1162.

In 2011, a team of scientists decided to use the fairly new technique of analyzing hardened deposits on the teeth — tartar — to gather information on long-ago diets. Microscopic traces of ancient wheat starch, for example, can be found in tartar.

“Tartar is really amazing,” said co-author Christina Warinner, an anthropologist who studies ancient microbiomes at the Max Planck Institute in Germany. “It’s like a little time capsule from your life.”

But Anita Radini, an archaeologist at the University of York in Britain, saw something under the microscope she wasn’t expecting: “It looked like nothing I had seen before — bright blue particles, almost like robins’ eggs.”

The researchers ruled out other bluish pigments common in the Middle Ages, which mostly were made with mixtures of copper, cobalt or iron. None of those metals were present. They used what is known as micro-Raman spectroscopy to identify the particles.

“I was completely surprised it was lapis lazuli,” Warinner said. “It’s very rare and very expensive.” She added: “There is no lapis lazuli in the burial environment. The only way it could have gotten into her teeth is because she was deliberately using it in some way.”

Alexis Hagadorn, who is head of conservation at Columbia University Libraries and was not involved in the study, called the find “very exciting.”

“While there are some archival records that identify individual medieval scribes, most of the producers of medieval books remain stubbornly anonymous,” she said. “This study is unprecedented in using archaeological evidence from human remains to suggest a direct connection between an individual and the work of the scribes who created the most sumptuously decorated books.”

Medieval women’s artistic and literary work “has been open to challenges and questions, since we rarely have signed images or identifiable ‘named’ female artists,” said Fiona Griffiths, a historian of the medieval period at Stanford University, who was not involved in the study. “Here we have evidence of a female scribe/artist,” not from a secondhand source, “but from residues in her mouth.”