Many animals are self-aware, so maybe its time researchers quit codenaming them

Siri & Alexa have surely been proposed to at some point, yet lab animals still go by alphanumeric codes.

For centuries now, this mouthful of a word has been considered as a taboo by field biologists and scientists doing research in animal labs. It means the ascribing of what we consider are exclusively human emotions, motives and characteristics to members of the rest of the animal kingdom – be they mammals, birds, fish or insects.

When studying these creatures (or ‘critters’ as so many Americans like to call them), the only behaviour that can be "objectively observed", counts. And most of that behaviour comes from a hard-wired instinct – it has nothing to do with what the creature under study may desire or want...or so scientists like to believe. That’s because it supposedly doesn’t have any emotions or desires, the way we do. And to ensure ‘objectivity’, the subjects are given numbers rather than names, which would otherwise make it personal. So, in a tiger reserve, for example, the tigers being studied are coldly labelled say, 'T1', 'T2' and so on – so the researchers can ensure that no emotions get in the way while they observe their subjects.

This, in animal labs. Labs where, often, the most hideous ‘medical’ (and often just bizarrely morbid) experiments are carried out. Subjects here are usually never named, just given ciphers and numbers. Actually, if you see this from the researcher’s point of view, perhaps it’s just as well. You cannot call a beagle you have just injected with some horrible brain-altering pathogen "Buddy" and then go home and look your own pet beagle in the eyes with a clean conscience.

It’s so much easier to label the subject ‘B-1’ and pretend it's a thing rather than living, breathing, emotive animal. A macaque monkey and animal technician at the University of Oxford's animal lab. Image credit: Labanimaltour.org

Behaviour has to be explained coldly, ‘objectively’. A tigress fiercely defending her young does not do so because she loves her cubs (as we do our own babies) but because she’s genetically programmed to do so in order to carry her (and her partner’s) genes into the next generation, and survive. This, despite the fact that when you see a tigress with her cubs, her (and her babies’) behaviour towards each other often looks affectionate and even tender – what we within our own species would call love. Baby animals don't ‘play’ (as our children do) because it’s fun and makes them happy, but only because their instincts tell them to hone their fighting skills and figure out their places in the group’s hierarchy.

Researchers will refuse to accept that the animals may actually be fooling around – prancing and dancing – simply because it’s a glorious day and they just want to enjoy themselves and have a bit of fun. And yet, when you watch, say crows mischievously (that’s an anthropomorphic adverb, right there!) yank at the tail of a snooty peacock making it honk in annoyance (another anthropomorphic term) you can’t help but wonder if the bounder is just having a bit of fun at the expense and dignity of the National bird! Closer home, anyone with a pet dog will fiercely vouch for the fact that Buddy has moods and emotions that must be catered to.

To many a researchers' horrors, this wall-eyed taboo was finally broken way back in the 1960s by a triumvirate of brave women – popularly called ‘Leakey’s angels’ (after the great anthropologist, Louis Leakey, who encouraged them.) They were Jane Goodall – who studied chimpanzees, the late Dian Fossey – who followed the gorillas in the Virunga National Park in Africa, and Birute Galdikas who studied orangutans in Indonesia. The trio refused to label their subjects with numbers, giving them household names – Fido, Fred, Flo, Fagin, Digit and so on, making their studies very personal indeed. (Dian Fossey, for example, lies buried next to her beloved gorilla, Digit, in the African forest.) 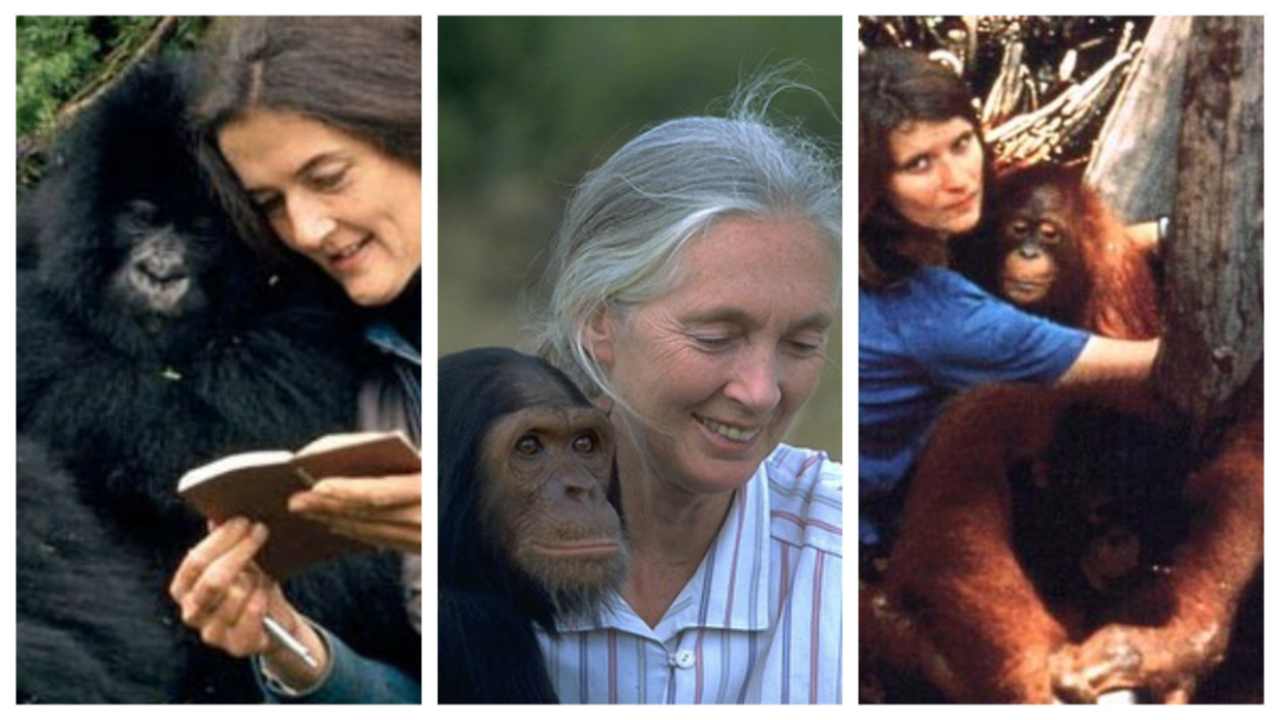 Dian Fossey, Jane Goodall and Birutė Galdikas – the trimates that taught us about primates. Image courtesy: One Green Planet

They had very good reason: these animals were our closest living relatives and in many ways behaved just the way we did: they did have emotions, ambitions and could be as scheming, affectionate, promiscuous and violent and loving as we have ever been. The scientific community was, of course, appalled by this and began deriding their studies – until they checked out for themselves and found the findings of these kind sensitive researchers to be spot on. Jane Goodall stunned the scientific world by discovering that chimpanzees used and fashioned tools (sticks to fish out termites from their colonies) – something considered till then an exclusively a human trait. Her studies and observations lost none of their scientific rigour just because she gave her subjects household names.

Now, of course, it’s being slowly accepted that many animals – apes, elephants, dolphins, dogs, parrots, even some fish – do have ‘self-awareness’ – another major feature for long considered an exclusively human trait. And some of these animals are even being given legal rights, same as us. 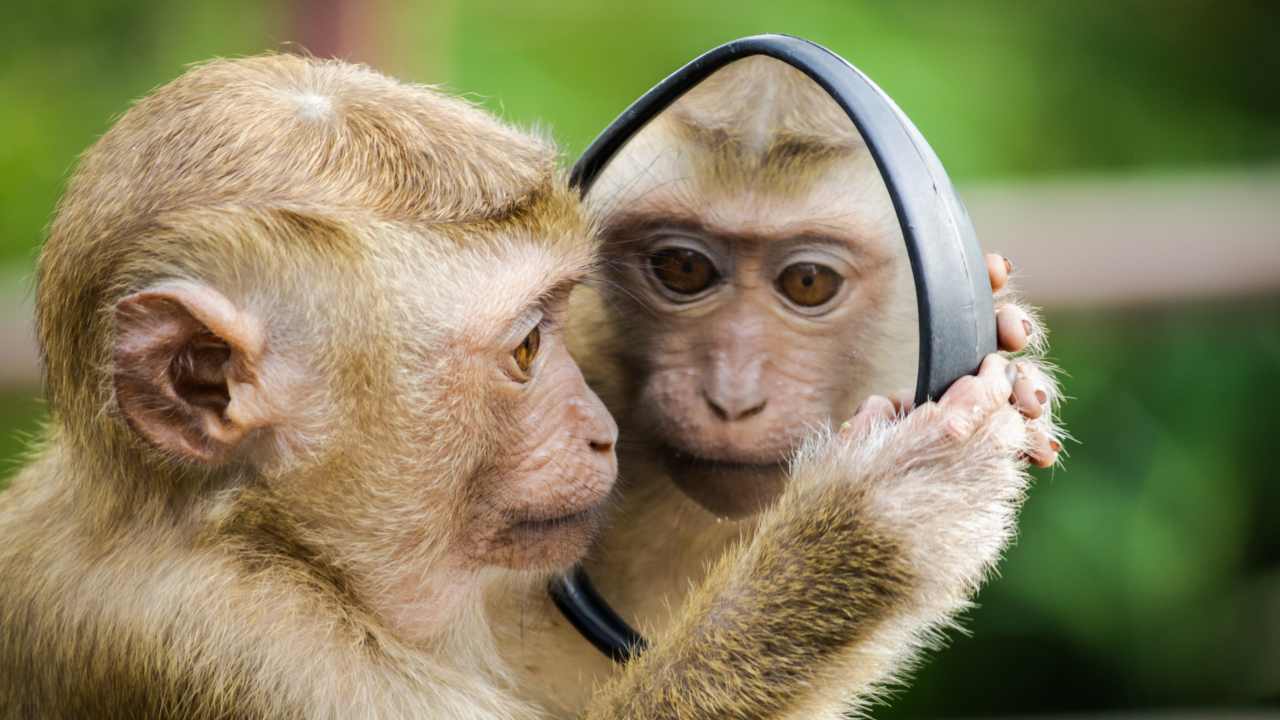 When's the last time you checked yourself out like this in a rear-view mirror? Image credit: Unsplash/Andre Mouton

Even so, old habits die hard. And the subject of anthropomorphism is still a bit of a hot potato in the scientific community. Even the press, while reporting, say, an animal attack – will refer to the animal involved as ‘it’, rather than by its sex, ‘he’ or ‘she’ – even if its gender was known. A tigress that has turned man-eater will be called ‘it’ rather than ‘she’.

It really is hugely ironical because, since time immemorial, we have been giving completely inanimate objects names and gender! Ships, planes, automobiles, trains are all referred to as ‘she’ and given such flowery names as ‘Raat Ki Rani’, Queen Elizabeth, and Morning Rose! Ships are christened and commissioned in elaborate ceremonies – as though they are alive! Innumerable movies have been made where machines (such as Herbie, the VW Beetle) are given personalities and names and get up to all kinds of shenanigans, which of course no machine can do. And needless to add, writers down the ages have given animals, human characteristics and names. I have myself written dozens of books with ‘human’ animals, insects and birds! George Orwell did so with ‘Animal Farm,’ Richard Adams in ‘Watership Down’, and there is, of course, a vast amount of children’s literature with humanised animal subjects. Thousands of films and cartoons have been made (just look at Walt Disney’s output) using animal characters.

Actually, perhaps the scientific community needs to sit back and take another look at what’s starting to happen. Here we are, getting hugely excited about artificial intelligence, which everyone says is going to revolutionize the way we work. And what do we do? We give our robots and AI devices names like Alexa and Siri, for example, just like so many years ago Dian Fossey called her beloved, living, breathing chest-thumping silverback, Digit.

And some of us have gone one crazier step forward: both Siri and Alexa have been at some time or the other, proposed to – and sent flowers by nutcases in love with them.

So much for objectivity and scientific rigor!