The machines only need electric infrastructure to operate and can be installed anywhere.

Imagine you could quench your thirst with water that doesn't originate from a river, spring or lake but comes directly out of the blue sky, from the air that surrounds you. What sounds like a science fiction movie is already a reality, and it is potentially for everyone.

The new technology, developed by Watergen, an Israel-based tech company, is currently being showcased in Vietnam’s capital city Hanoi.

This is how the air-to-water magic happening inside the machine works: The atmospheric water generator takes in ambient air through a filter, and cools at its dew point, extracting water through condensation.

The water is then purified, mineralized, and is ready and safe to drink.

It comes with a built-in reservoir and a water treatment system. In Vietnam, with its high air humidity, the machine can extract even more water, says Watergen President Michael Mirilashvili: "Here in Vietnam, in the three locations where we tested the technology, it performed even better than we expected." 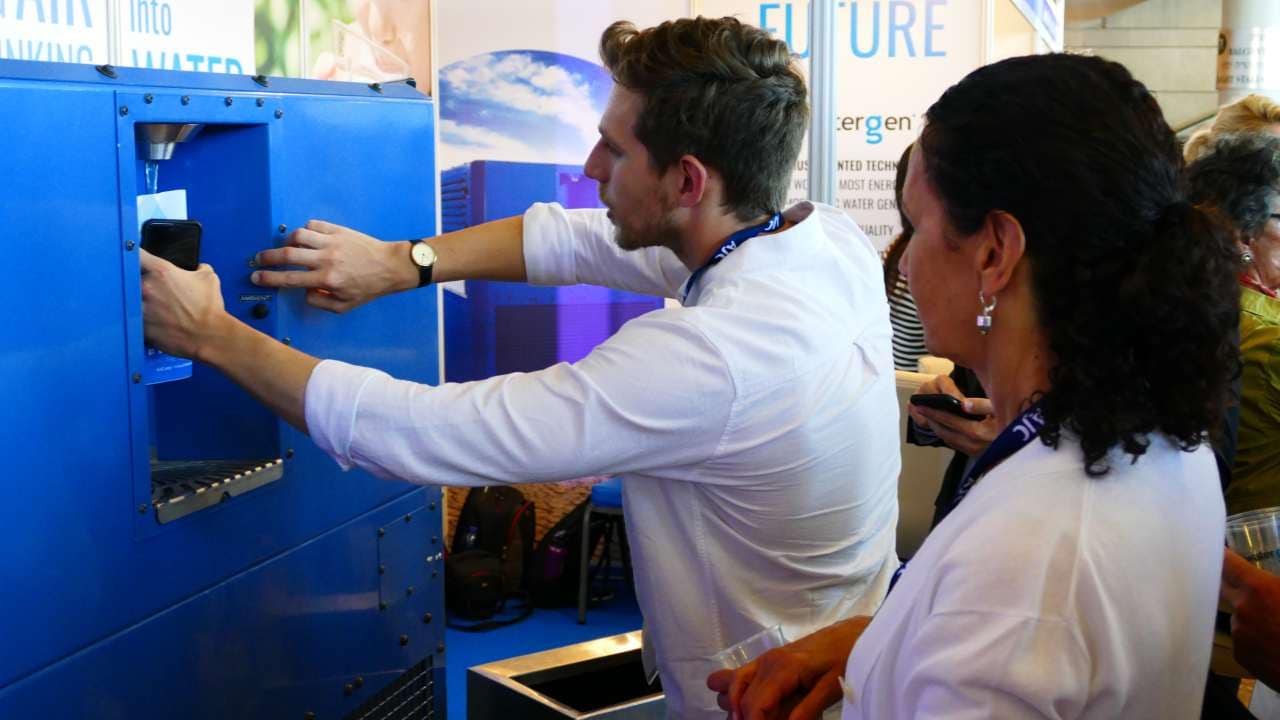 A large-scale unit can extract up to 5000 liters per day. It is designed to provide water to approximately 2500 people per day, and it can be installed on a rooftop and connected directly to the building’s water grid. A small generator, GENNY, can provide drinking water for homes and offices, it generates 25 to 30 liters per day. The machines only need electric infrastructure to operate and can be installed anywhere.

Watergen wants to take its technology even further: "Our scientists already developed the technology that implements the Watergen core technology inside cars, buses, trains and all kinds of transportation", Mirilashvili says. Another water generator by WaterGen was introduced to citizens of Hyderabad in a TATA-Water-Gen pilot program to promote clean water innovation in the city. Image courtesy: WaterGen

In Vietnam, a country still suffering from water shortages and poor water quality, the demand for clean water solutions is increasing, says Ambassador of Israel to Vietnam, Nadav Eshcar: "Vietnam is one of the countries most affected by global warming, suffering from droughts in the South and Central region in recent times. In Israel, we already have solutions, which we are introducing here".

Watergen's generator has already been in use in numerous countries around the globe, in India, the United States, Latin America, China, Russia, and several African countries, to name a few. It is also being listed as one of the Technology Pioneers in 2018 by World Economic Forum.

The water generator presented at the event “Israel in the heart of Hanoi” is a gift from Watergen to the Hanoi People's Committee. It will be on display in Ly Thai To square in the city center for a month, allowing Hanoi’s citizens to take a sip from the sky.

The exhibition coincides with a celebration of 25 years in diplomatic relations between Israel and Vietnam.