Looking for a launch service to send your cubesat or small satellite to orbit? Here's an overview of your options

Demand-and-supply has led to a burgeoning market for launch service providers who can streamline the entire process of launching cubesats and small satellites.

For several decades rockets were built to deliver satellites that weigh several hundred or thousand kilograms. None of the launch providers were really interested in just putting satellites into orbit that were the size of a shoebox or typical refrigerator, because of the insignificantly low returns they would get in accommodating these satellites against larger payloads.

However, over the last decade, the cubesat and small satellite revolution has created a growing demand for launch services for these satellites.

In this article we provide a gentle primer to the topic of how the demand for cubesat and small satellites has evolved and give an overview of some of the launch service providers currently available on the global marketplace for space.

In the next few chapters we take a brief look at how launch service provision works and discuss what key performance characteristics need to be taken into account when selecting a product for your operation. 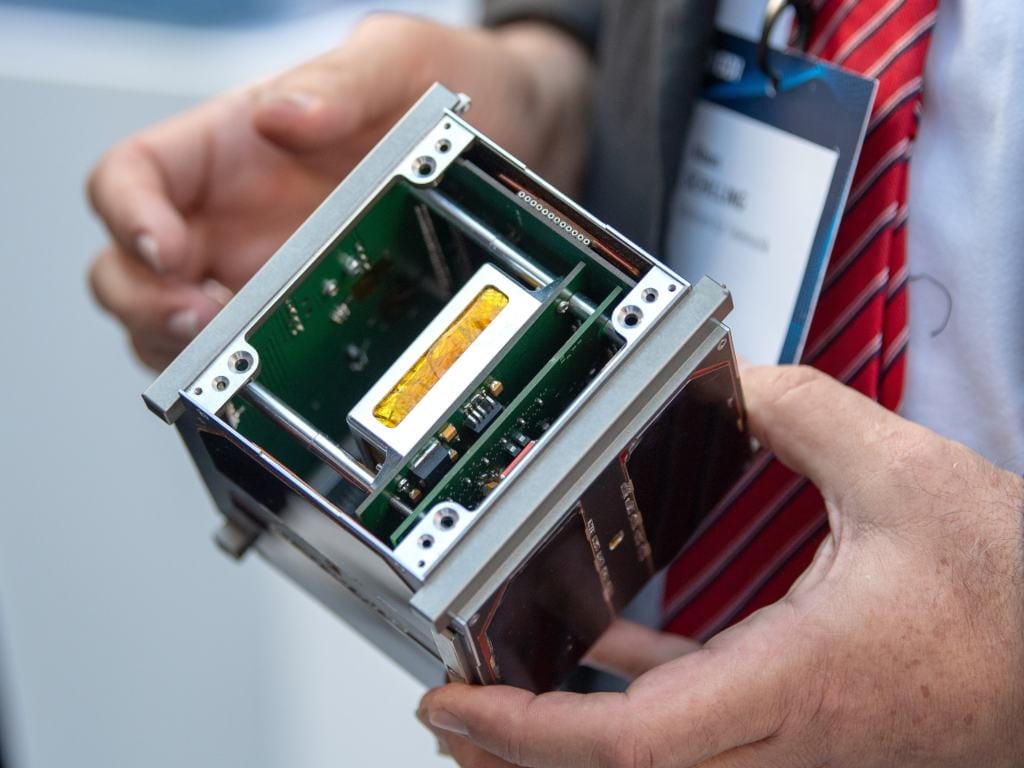 Cube-shaped satellites like this one weigh about 1 kg and has an edge length of 10 cm, which corresponds to the Cubesat standard. Image: Getty

The sudden emergence of an avalanche of cubesats and small satellites in the space industry over the last decade has created a classic problem of demand and supply for space launches. Essentially, because the big rockets had to find a way to accommodate and adapt to servicing multiple cubesats and other small satellites on their rockets.

Given that only a handful of launches are available for any satellite to get to orbit every year, multiple satellite manufacturers have been trying to get onboard launch manifests as quickly as possible to ensure their satellites can deploy and provide services to their customers. This demand-and-supply problem has created an opportunity for service providers who can streamline the entire process of procuring a launch, and the space industry has seen the emergence of several launch service providers. Three Cubesats being deployed from the space station into low-Earth Orbit. image: NASA

The lifecycle of launching a cubesat or a small satellite

Once a satellite is built there are several aspects that need to be taken care of in the process of launching it into space to ensure safety and success:

Types of launch options for cubesats and small satellites

Launch service providers make life easy for teams trying to launch their satellites by taking the risk of booking a launch with the rocket (launch provider) and offering slots as individual contracts. Once a potential launch provider is selected, the details of interfacing the satellite into the launch vehicle and complying with the requirements of the launch vehicle are all provided on behalf of the launch operator.

Launch service providers package the provision of launch adapters and Picosatellite Orbital Deployers (PODs) so that both the launch provider and the satellite manufacturers don’t need to bother about having the right mechanical and electrical interfaces with the launch vehicle. Once a decision is made to choose a particular launch option, all the legal and regulatory aspects of launch support, provision of the deployers, the necessary environmental tests, transport of the satellite, clearance of customs, running of final tests and integrating the satellite with the rocket is all taken care of by these launch service providers.

However, this landscape is now evolving with launch operators such as SpaceX and RocketLab themselves looking to provide services. This phenomenon may become bigger as many other small satellite rocket operators may come online to make the entire process of getting to orbit smoother for cubesat and small satellite manufacturers.

The Small Satellite Orbital Deployer (SSOD) attached to the Japanese module’s robotic arm is used by astronauts who seal the airlock on the ISS, open the other end up to space, and command the station’s Kibo robotic arm to pick up the deployer to bring it outside for satellite deployment. ISS based launch service providers are specific to US and Japan as they are key stakeholders in using the Kibo robotic arm. The ISS can also be used to perform experiments inside the station.

This problem is creating another opportunity in the launch service provision industry to create a service to deliver satellites launched as a part of a constellation on the same rocket to go into different inclinations. We call this the ‘orbit as a service’ model.

Launch options for cubesats and small satellites on the market

Below we have listed several launch options for cubesats and small satellites that are currently available. [Please note that this list will be updated when new products are added to the global marketplace for space – so please check back for more.]

EXOLAUNCH began as a spinoff from the Technical University of Berlin and today offers launch services, mission management solutions and deployment systems for small satellites.

The company offers a tailored launch service designed to meet the specific needs of each smallsat customer with a variety of launch opportunities are available including LEO/SSO and GTO/GEO.

Previous clients have included some of the world’s most ambitious startups and established companies along with universities, space agencies and scientific institutions.

Spaceflight Industries provide services to help clients identify, book and manage rideshare launches. The company aims to offer a straightforward and cost-effective suite of products and services that includes

Ultimately, Spaceflight enables commercial, non-profit organizations and government entities to achieve their mission goals – on time and on budget.

SpaceX designs, manufactures and launches advanced rockets and spacecraft. The company was founded in 2002 to revolutionize space technology, with the ultimate goal of enabling people to live on other planets.

SpaceX offers competitive pricing for launches on its well-known Falcon 9 and Falcon Heavy systems. The company can also offer discounts for multi-launch purchases for clients able to commit to a longer term contract. In addition, SpaceX can also offer crew transportation services for certain LEO destinations.

The vehicle is a 2-stage rocket that is 17m in length and has a diameter of 1.2m. The vehicle delivers nominal payloads of up to 150kg (maximum is 225kg) to a 500km sun-synchronous orbit.

Space BD aims to become a one-stop shop to respond to all issues related to the industrialization of space and alleviate the work of businesses that are developing new technologies.

As a first step, Space BD seeks to lower the burden of accessing space and contribute to the commercialization of the Low Earth Orbit (LEO) region by providing solutions through business-driven approach to overcome various obstacles with the industrialization of space.

NanoRacks LLC was founded in 2009 in Houston, Texas and is a market leader in commercial small satellite launches from the ISS. NanoRacks CubeSat Deployers provide the opportunity for customers to deploy cubesats up to 6U in size ranging from 1 to 50 kilograms.

The deployment platform also allows for multiple satellites to be deployed in sequence, enhancing abilities to create cubesat constellations. Additionally, NanoRacks has for the first time launched its External CubeSat Deployer on OA-6 that is mounted to Cygnus, and will deploy after Cygnus departs ISS.

On-board the ISS, NanoRacks provides plug-and-play microgravity research facilities, allowing standardized payloads to use a range of platforms. NanoRacks aims to enhance space utilization in low earth orbit and beyond.

Orbit as a service

D-Orbit is a NewSpace company with solutions covering the entire lifecycle of a space mission, including mission analysis and design, engineering, manufacturing, integration, testing, launch, and end-of-life decommissioning.

D-Orbit states that its competitive advantage is the versatility of launch and deployment services available, which can be tailored to the customer’s needs. From the launch procurement of a single spacecraft using standard deployment strategies to the precise deployment of a full constellation with ION CubeSat Carrier, a free-flying dispenser developed and operated by D-Orbit.

ION CubeSat Carrier can host any combination of cubesats with a total volume of up to 48U and release them individually into distinct orbital slots, enabling deployment schemes previously unavailable to spacecraft with no independent propulsion.

Marketplaces to find and book a launch

Precious Payload is an online launch booking platform for smallsats that features manifests and rideshare slots posted directly by launch operators. The aim is to reduce costs and time associated with procuring the launch by adopting the latest standards and introducing automatic matchmaking algorithms.

Precious Payload advocates for building a GDS-like (global distribution system) architecture for space launches, similar to what has been done for airlines and cargo shipments when those industries entered the internet age.

This story has been republished with permission from the satsearch blog. You can find the original story here.

The author is the co-founder of satsearch, a space industry expert and curator of NewSpace India, a networking community for space-related developments in India.