China launched the first module of its "Heavenly Palace" space station on Thursday, a milestone in Beijing's ambitious plan to establish a permanent human presence in space. Billions of dollars have been poured into space exploration as China seeks to reflect its rising global stature and growing technological might, following in the footsteps of the United States, Russia and Europe. The Tianhe core module, which houses life support equipment and a living space for astronauts, was launched from Wenchang in China's tropical Hainan province on a Long-March 5B rocket on Thursday, state television showed. 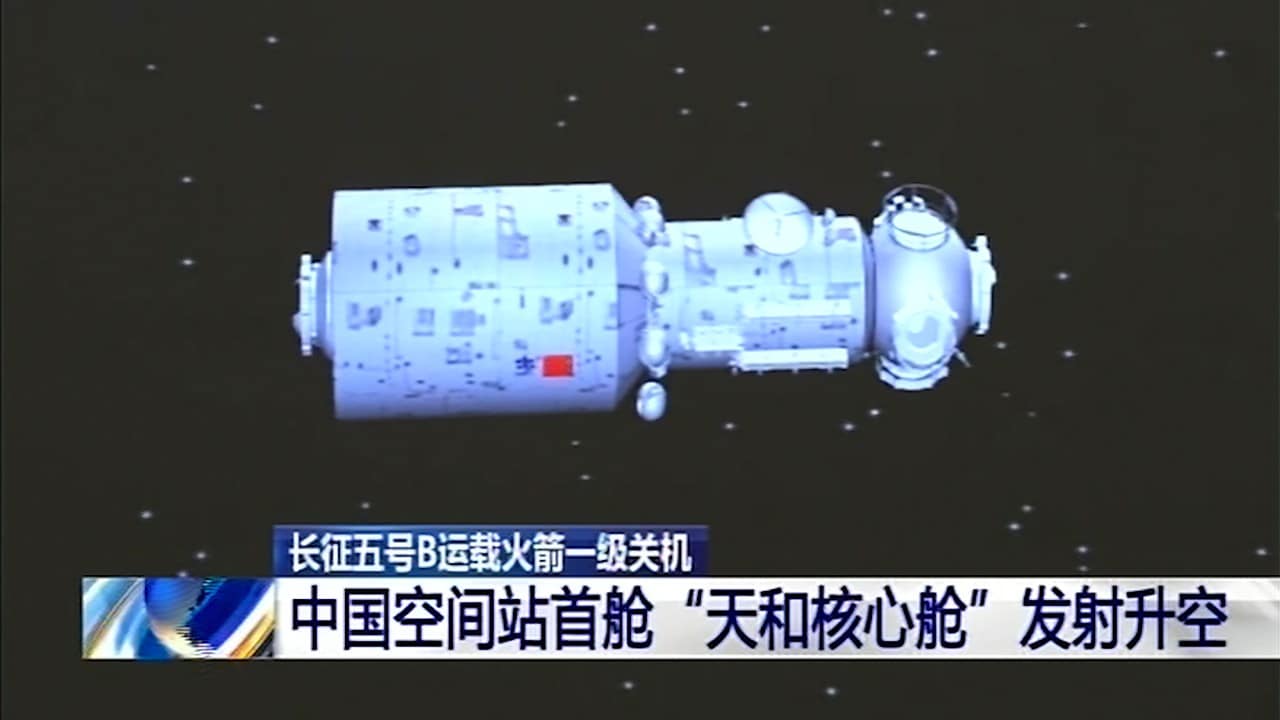 In this image taken from undated video footage run by China's CCTV via AP Video, a rendering of a module of a Chinese space station is shown. China has launched the core module on Thursday, April 29, 2021 for its first permanent space station that will host astronauts long-term. (CCTV via AP Video)

Chinese President Xi Jinping called the space station a key step in "building a great nation of science and technology" in a congratulatory message Thursday.

The Tiangong space station, whose name means "Heavenly Palace", is expected to be operational by 2022 after around 11 missions to deliver more modules and assemble them in orbit.

Live footage from state broadcaster CCTV showed space programme employees cheering as the rocket powered its way through the atmosphere billowing flames from the launch site.

Crowds wearing sunhats and wielding smartphone cameras gathered under the coconut trees of a nearby beach to watch the launch as a band played in photos published by the China Aerospace Science and Technology Corporation.

"A palace in the sky will no longer be just a romantic fantasy of the ancients," the CCTV anchor said.

The completed station will be similar to the Soviet "Mir" station that orbited Earth from the 1980s until 2001.

The Chinese space station is expected to remain in low orbit at between 400 and 450 kilometres above Earth for a lifespan of around 15 years.

The completed station, weighing little more than 90 tons, will be around a quarter the size of the International Space Station.

The station will have two other modules for scientific study and will be equipped with solar panels as well as experimental equipment including an ultracold atomic experiment apparatus, according to the Chinese Society of Astronautics.

The core module will give three astronauts 50 cubic metres of living space, equipped with advanced telecommunications equipment that will allow astronauts to browse websites "no differently from normal people using the internet and phones on Earth", Bai Linhou, deputy chief designer of the space station, told CCTV.

China launched the Tiangong-1 lab, its first prototype module intended to lay the groundwork for the permanently crewed station, in September 2011.

The lab disintegrated on re-entry into the Earth's atmosphere in 2018, two years after it ceased functioning.

The International Space Station — a collaboration between the US, Russia, Canada, Europe and Japan — is due to be retired after 2024, although NASA has said it could potentially remain functional beyond 2028. In this photo released by China’s Xinhua News Agency, a Long March 5B rocket carrying a module for a Chinese space station lifts off from the Wenchang Spacecraft Launch Site in Wenchang in southern China’s Hainan Province, Thursday, April 29, 2021. China has launched the core module on Thursday for its first permanent space station that will host astronauts long-term. (Ju Zhenhua/Xinhua via AP)

With the retirement of the ISS, which received its first crew in 2000, China's Tiangong could become the only space station in Earth's orbit.

Beijing does not have specific plans to use its space station for international cooperation like the ISS, but Chinese space authorities have said they are open to foreign collaboration, although the scope of that cooperation is as yet unclear.

The European Space Agency has sent astronauts to China to receive training in order to be ready to work inside the Chinese space station once it is launched.

China also said in March it was planning to build a separate lunar space station with Russia.

The facility, planned for either the surface or the orbit of the Moon, would house experimental research facilities and would be Beijing's biggest international space cooperation project to date.

The country has come a long way since its first satellite in 1970.

The Chinese space programme sent a probe into Mars' orbit earlier this year. The wheeled probe is expected to touch down on the surface of Mars in mid-May.