Like humans do: Bonobo mothers meddle in their sons' love-lives, push for grandkids

They use their power and status to ensure their son gets the best mate, ignoring their daughters.

Anyone who's experienced a mother pushing them to get a move on and produce grandkids might just sympathize with this.

A new study has described the outsized role bonobo moms play in their sons' sex lives: from pulling rank to ensure their male offspring get to meet attractive ovulating females, to interfering with male rivals' attempts to mate.

The paper was published Monday in the journal Current Biology and found that bonobo males whose mothers were alive and remained in their group were three times more likely to father children. And the authors credited the success of the "wingmoms" on the nature of bonobos' female-dominant societies, which have long been known for their altruistic and peaceful character, in contrast to more violent and patriarchal chimpanzees. A young male bonobo is groomed by his mom in the Kokolopori Bonobo Reserve. Image credit: Martin Surbeck/Max Planck

"This is the first time that we can show the impact of the mother's presence on a very important male fitness trait, which is their fertility," co-author Martin Surbeck, a primatologist at the Max Planck Institute for Evolutionary Anthropology in Leipzig, Germany said in a statement. "We were surprised to see that the mothers have such a strong, direct influence on the number of grandchildren they get."

For the study, Surbeck and colleagues observed wild bonobo populations in the Democratic Republic of Congo, as well as wild populations of chimpanzees in Ivory Coast, Tanzania, and Uganda.  To verify paternity, they collected the primates' droppings for DNA analysis.

They found that while both bonobo and chimpanzee mothers attempted to assist their sons, bonobos were far more successful because their communities' highest ranks are dominated by females. Chimpanzee communities, on the other hand, are dominated by males who compete for alpha status. The two species together are humans' closest relatives in the animal kingdom and share about 99 percent of our DNA. "The bonobo moms act a bit like social passports," Surbeck told AFP.  "The sons, in close proximity to their moms, are also very central in the group and access positions in the group that allow them to interact more with other females including copulation. If there's a female who's very attractive, you see moms stick around them, and in the shadow of their moms are the males," he added.

By contrast, they found that if a mother lost her high rank, her son also fell in rank and was subsequently less successful in his mating attempts. In addition to intervening in their sons' rivals attempt to mate, bonobo mothers also protected their own sons from the efforts of rivals to disrupt courting and sex.

Interestingly, bonobo mothers did not go the extra mile for their daughters, nor did they help their daughters raise offspring. Surbeck believes that, since bonobo daughters leave the community and males remain behind, it may simply not be worth the mothers' time and efforts from an evolutionary perspective.

One thing the team believes they may now have tentative evidence for is the so-called "grandmother hypothesis": that a post-reproductive female can increase her own lifespan and continue her genes by ensuring her offspring's reproductive success. 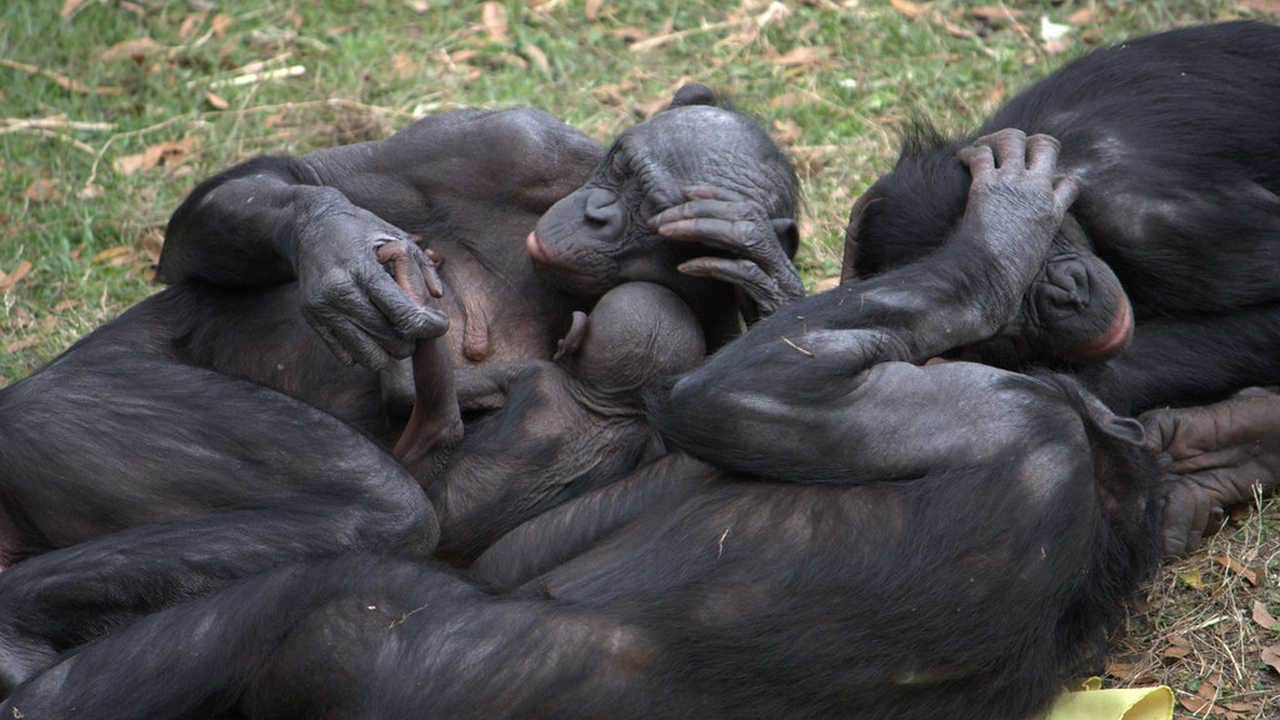 It is an idea that anthropologists have applied to humans and Surbeck believes it could also be the case for bonobo populations. "The interesting thing now is in bonobos we have such a mechanism, apparently allowing the females to do that, but intriguingly not through their daughters but their sons," he told AFP.

Moving forward, Surbeck said he would like to confirm through more long-term research the benefits of the behaviour on the longevity of mothers and find out whether mothers exhibit welcoming behaviour to new female arrivals in the community who go on to become their sons' mates. More broadly, he said, studying the differences between gender egalitarian and largely peaceful bonobo societies, in which members practice both heterosexual and homosexual sex to strengthen social bonds; versus alpha-male led chimpanzee societies, could yield clues about our own evolutionary past.

"One has to be clear — we did not evolve from bonobos or chimpanzees but we share with them a common ancestry," said Surbeck. "Comparing us with our closest living relatives might give some idea about traits which could evolve under selective pressures."

COVID-19 origins: Should we pay more attention to the lab leak theory and formally investigate it?