Studies have shown that Karnataka alone holds the largest elephant population in India.

A study involving close monitoring of elephants on daily basis for two years in Karnataka has concluded that landscape-level management is necessary for mitigating human-elephant conflicts.

Elephants are engrained in India’s culture and heritage. India has the largest Asian elephant population in the world. Elephants are generalist species that are capable of adapting to diverse habitats. More than 5.01% of land in India is under Protected Area - either national parks or sanctuaries. Elephants tend to move across diverse habitats for feeding and breeding. So steps are taken to preserve and protect these elephant corridors.

On the other hand, the rising human population has altered natural forest ecosystems to a greater extent. There are large coffee plantations, tea estates, monoculture plantations adjoining protected areas. Wild animals like elephants and leopard tend to venture into these human-modified landscapes which ultimately lead to human-animal conflict.

Studies have shown that Karnataka alone holds the largest elephant population in India. The state is also known for its predominant coffee cultivation. The region is witnessing increasing man-animal conflicts. Even some translocation of elephants has also been carried out but may be a temporary solution. A team of wildlife researchers led by Dr. Ananda Kumar attempted to understand the habitat use pattern of elephants in these human-modified landscapes. 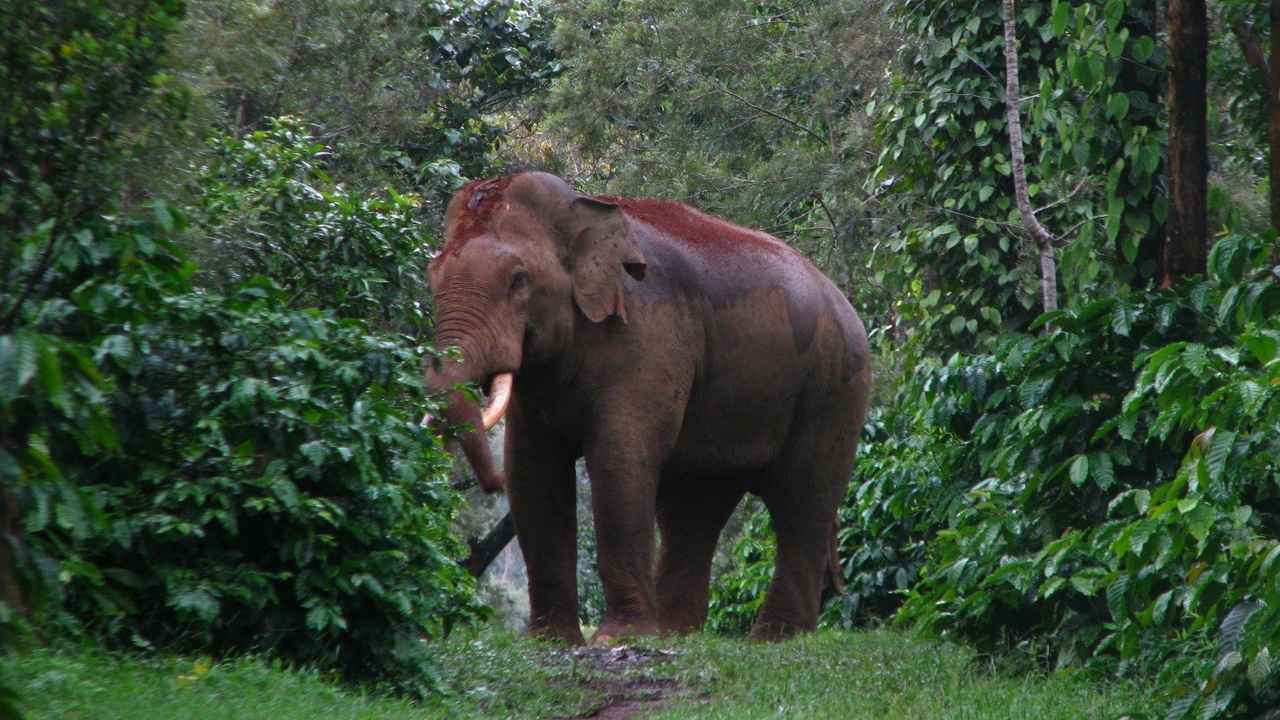 A new tusker in a coffee estate, Hassan (Photo : Vinod)

Researchers carried out the study in Hassan and Madikeri divisions of Karnataka. Apart from natural forest vegetation, the study area is dotted with coffee plantations on the sloppy lands, paddy cultivation in the valley, monoculture plantation fragments along with the backwaters of Hemavati reservoir. Researchers tracked movement of elephants across habitats and collected GPS reading during the wet and dry season of 2015 to 2017. They used ‘Manly selection ratio’, a statistical tool to process the data so as to decide preference or avoidance of habitats by elephants.

There is a common belief that elephants specifically move towards agricultural lands in the dry season in search of water and forage. In this regard, Dr. Ananda Kumar clarified that it is not entirely true. Most of the crop damage by elephants occurs in paddy fields and it can be seen during late wet and early dry seasons. During hotter months, natural vegetation areas such as monoculture plantations and forest fragments are important resource areas which provided shelter for elephants in the study region.

Therefore, researchers have recommended landscape-level management strategy as a viable solution. It means that care should be taken while making changes in the land-use practices in habitats such as coffee, agriculture or clear felling of monoculture plantations of Acacia, Eucalyptus or forest patches etc. as it may have negative effects on elephant conservation or aggravate human-elephant conflict.

Since elephants prefer to stay in monoculture plantations, forest departments should think strategically when to clear-fell these plantations. It might turn out to be a dangerous step if taken up without careful thought on negative consequences. If these places are not available, especially in places like Hassan, elephants will start using coffee plantations or agriculture habitats more frequently which may aggravate human-elephant conflict situation.

While speaking to India Science Wire, Vinod Krishnan, another member of the team, said “we wanted to highlight this fact that though, forest remnants and monoculture refuges represent less than 7% of the total study area, they are vital for elephants and helpful in containing conflicts. As you move from the southern part of the Western Ghats towards the north, most of the forest is fragmented. Forest remnants and monoculture refuge areas play a critical role for elephants. The inevitability of elephants using these modified habitats and people dependency determines the survival of both”.

Throughout the study, the monoculture plantations were referred to as 'refugees' and the data proves that elephants are visiting these refugees. In areas devoid of forests, the presence of monoculture refuges plays a critical role for elephants in terms of shelter and food due to the presence of a lot of secondary vegetation.

If there is no chance to increase forest cover or connect forest fragments or Protected Areas like in Hassan region, the study recommends the need to protect and retention of monoculture refuges for reducing incidents of conflicts. This does not mean that we increase monoculture areas at the expanse of forests.  We need to have a deeper understanding of land-use on a broader scale for management. This is forms basis of landscape-level management strategy.

I spy with my little eye: Cameras to monitor human-elephant conflict in Chhattisgarh

Eight incidents from 2021 that show human-animal conflicts are increasing