Lakshadweep's corals are dying, and they'll take the island's inhabitants with them

The government should support and use the findings of such long-term monitoring.

Heat does to coral reefs what peroxide does to human hair — it bleaches them. For these underwater colonies, though, whitening is more than a mere draining of colour. They could become diseased and die. But it's not a death sentence for all corals. While some tolerate high temperatures better than others, the reefs' recovery suffers. This is the paradox gripping the shallow coral reefs of Lakshadweep Islands.

In 1998, Rohan Arthur, who heads the Nature Conservation Foundation's Oceans and Coast Programme, Mysuru, was a young intern in Kenya. When an unusually warm sea, caused by El Niño, blanched the corals, he rushed back to India. Some reefs were already dying by that time, but he managed to document the species, assess which ones suffered the most and gauge the extent of the damage. Since then, many volunteers, field assistants and biologists, working with Arthur, chronicled changes on six reefs around three islands — Kavaratti, Agatti, and Kadmat. Synthesising all the collected data, Shreya Yadav, Teresa Alcoverro and Rohan Arthur recently published a progress report.

Over the following years, the very shape of the reefs changed. Acropora, a group of fast-growing branched coral struggled to recover. But Porites, a group of slow-growing coral that grows in mounds, withstood the heat of El Niño. Even though entire colonies bleached, it increased in number. This turnover in species, from fragile to resilient ones, built up the resistance of the reef against future El Niño events. But it was not without consequence.

In essence, an El Niño is like a wildfire sweeping through a forest, killing the trees and leaving only fire-resistant bushes in its wake. Instead of intricate branches that could shelter many species at different rungs, the coral reef became two-dimensional, like low shrubland. Reef fish and invertebrates seeking refuge and food in the nooks and crannies of Acropora thickets were stranded. The growth of Porites made little difference to them because the creatures couldn't hide in its boulder-like structure. The researchers calculated that the annual rate of reef recovery was no more than four percent. The rising dominance of Porites ensured the mortality figure wasn't as high as the devastation of 1998. The star real estate developer, the Acropora group, which would have helped the reefs bounce back with speed, lost even more ground. However, there was a little glimmer of hope — the surviving coral species didn't react as dramatically as they had in 1998.

For instance, El Niño almost exterminated Acropora in the reefs, but a few isolated patches survive in the lagoons. Although the shallow water becomes hot every summer, the delicate coral thrives, says Arthur. But in the reef that had last experienced unusual temperatures 12 years ago, the same species bleached and died. The periodic exposure to warmth primed the lagoon corals to anticipate and cope with it.

Not only are some species like Porites adapted to handle the heat, some strains of algae, which live within corals and sustain them (see here), also evolved high-temperature thresholds. Corals that have experienced heat-stress may adopt these hardy algal strains to cope with warm seas. 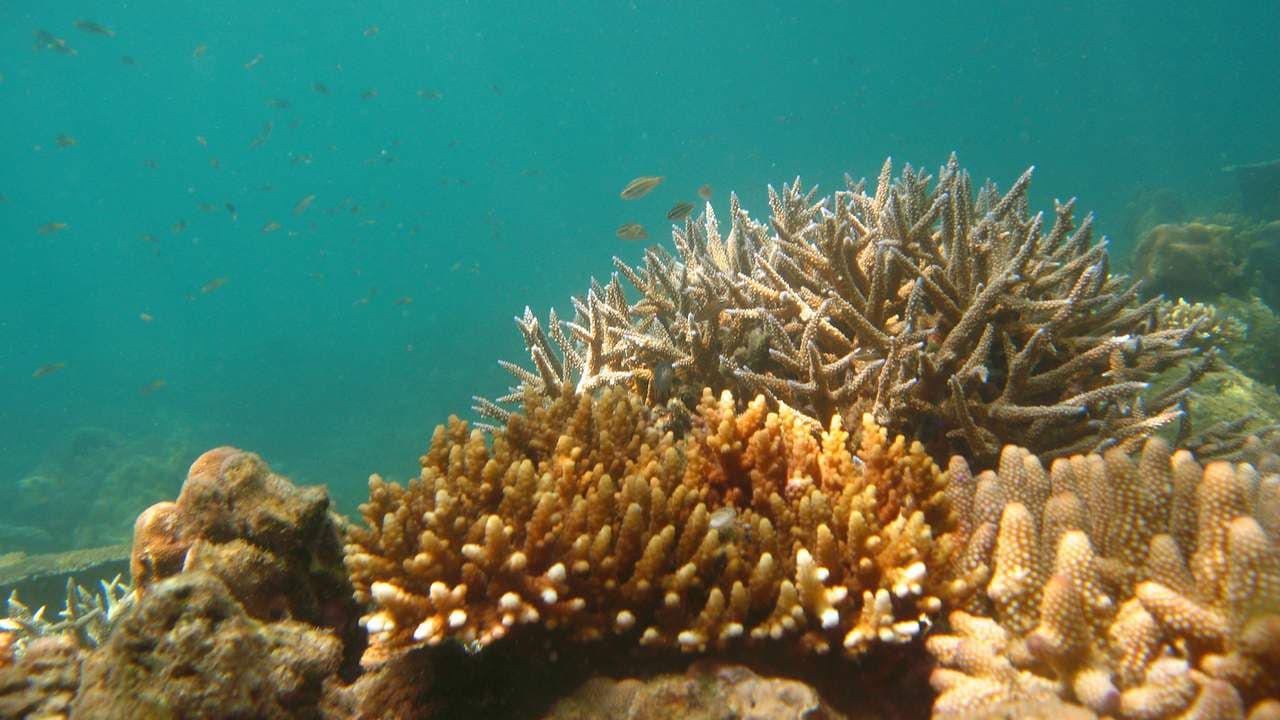 Perhaps inoculating these corals with such heat-toughened algae could help them brave bleaching events. Acquiring resistance in this way is not without its disadvantages. It delays the growth of juvenile corals and shrinks the size of eggs.

In the years following 2010, the reef's recovery was a sluggish 0.40 percent per annum, a four-fold drop in vigour compared to the aftermath of 1998. The slow-growing corals powered much of the comeback. Too few Acropora remained to saturate the water with its spawn and create future stands.

By 2015, only about five percent of the undersea colonies had returned. Of this, Porites, which had been in the minority in 1998, made up 40 percent.

Another fast-growing coloniser, Pocillopora, also called cauliflower coral for its looks, took up 20 percent of the reef. It doesn't grow as fast nor does it branch out as much as Acropora, so it is by no means a replacement. Many species that eat Acropora “don’t like to munch on much else,” says Yadav. These creatures lose out in a Pocillopora-dominant reef. Other species that bank on the cauliflower-like coral may receive a boost as they gain more habitat. 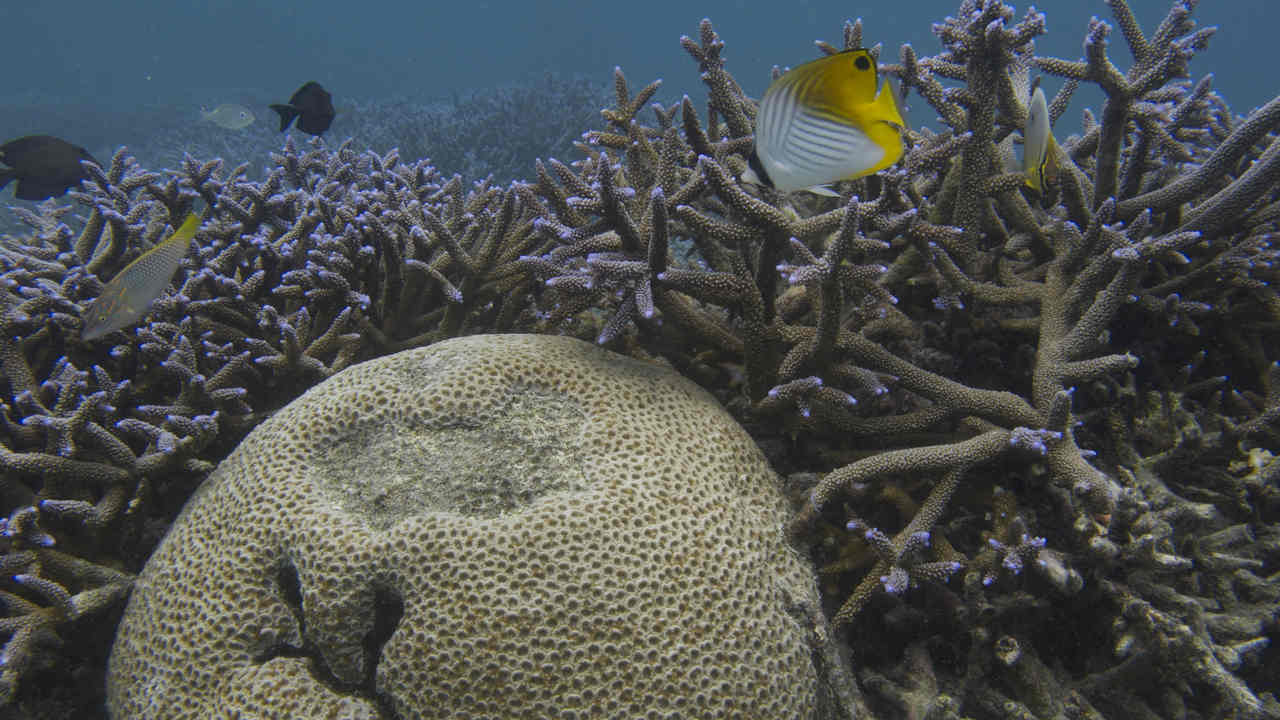 Acropora growing in a lagoon behind a slow-growing coral. Image: Rohan Arthur

“Overall, it means that the entire assemblage is being reset, and with it, the functioning of the reef is shifting in ways we still have to discover,” says Arthur.

Developing resistance while recovering at a snail's pace may seem like a paradox at first, but these two processes work in lockstep. The researchers estimate that these coral reefs would need 30 years to recoup from the havoc of 2010. Instead, the ecosystem had only six years before the most intense El Niño to rock the region wiped out 31 pecent of the recuperating colonies. It's still too early to say how they are reacting to this setback.

The reefs of the Andaman Islands have fared better, says marine biologist Naveen Namboothri, Director of the Dakshin Foundation. They have had a long history of dealing with human activity on land — agriculture, tree-felling, and industry. Fertilisers, pollutants and sediments carried by freshwater streams poured into the reefs. Tough species capable of withstanding stress became dominant. Lakshadweep's corals, however, didn't face environmental pressures until recently, and they haven't had enough time to adapt. Despite developing resistance, the Bay of Bengal reefs followed a similar pattern after the 2010 bleaching event, according to Namboothiri. Acropora declined sharply as Porites and other hardier species grew to dominate. However, Pocillopora hasn't enjoyed similar success, surviving in scattered patches of low numbers.

As if the sledgehammer effect of El Niños wasn't enough, human-made problems also gnaw at the reefs.

With declining tuna catch, commercial fishing started in the reefs around 2013. Herbivores like parrotfish graze on algae and keep the coral clean and healthy. Predators like groupers control the numbers of coral-eaters, like the psychedelically coloured nudibranchs and starfish. When fishermen remove these fish in higher volumes, the coral reefs get smothered by algae and eaten to shreds, handicapping their recovery from El Niño events. Aerial shot of Agatti. The reef — the faint outer rim of white that separates the shallow lagoon from the deeper ocean beyond — is the only thing protecting the atoll from the vagaries of ocean weather and wave battering. Image: M.D. Madhusudan

Instead of recognising the problems confronting the islands and planning for the future, the government and its agencies have big plans that place the struggling reefs under ever more pressure. NITI Aayog wants to boost the archipelago's tourism infrastructure with luxurious villas on lagoons, an airport in Minicoy and more jetties. The Department of Fisheries intends to increase fishing volumes.

Even as El Niño events strike more often and with greater ferocity, coral reefs react by becoming hardier and rebounding ever slower.

“If this pattern were to continue,” says Namboothiri, “it can even lead to significant declines in coral cover, not just in Lakshadweep but the entire Indian Ocean.”

The engine driving the increasing frequency and intensity of El Niño is climate change. The 2015 Paris Agreement aspires to limit average temperature rise to 1.5ºC above pre-Industrial era, high enough to kill up to 90 percent of coral reefs, says the IPCC's Global Warming of 1.5 Degrees report released on 8 October 2018. Even if we maintain course at today's average of 0.87ºC above the temperature of the early 18th century, it's still too hot as we've already lost nearly 70 percent of corals worldwide.

“As Charles Birkeland, one of my professors [at the University of Hawai'i at Mānoa] likes to say, “we might keep the corals but lose the reefs”,” says Yadav. “Geologically, reefs have seen much worse in their 200-million-year history, and it is naive to think that they will disappear altogether anytime soon. It's just that they will likely not serve our needs anymore and millions of people depend on them today.” 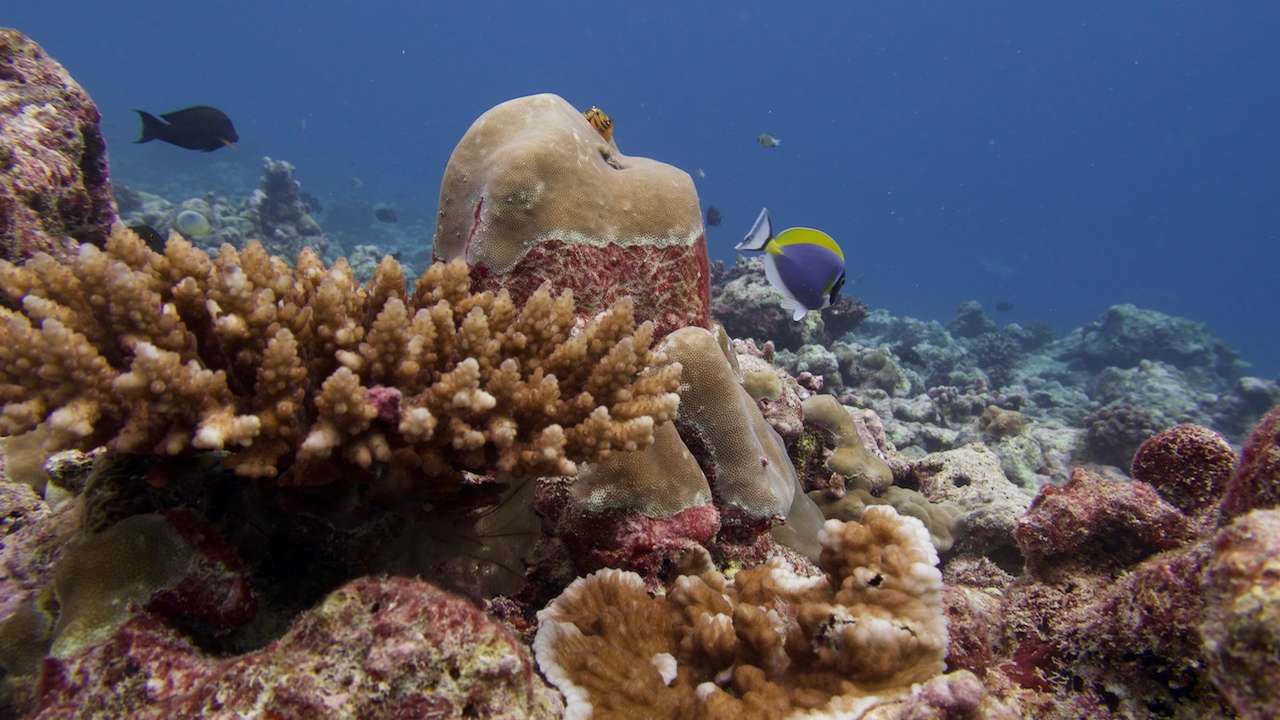 It's not just the livelihoods of the 70,000 inhabitants of the Lakshadweep islands that is at stake, but life on these atolls may become unsustainable as well. Reefs prevent island erosion, maintain freshwater and absorb about 90 percent of the wave energy battering coastlines. What the government doesn't seem to realise is that its plans to build infrastructure on the atolls will be in peril if the reefs are destroyed.

The team from Nature Conservation Foundation continues the monitoring effort, returning to the archipelago every year to see how the reefs in these three islands are doing.

“The difficulty is processing this amount of data, and that is our primary bottleneck — apart from the constant battle of convincing funders that this is something worth doing!” says Arthur.

The government should support and use the findings of such long-term monitoring to inform its island management and policy, says Yadav.

Failing this, the corals may indeed still survive. But the same cannot be said for the islands.

Role of reef sharks 'cannot be replaced', says study as most risk extinction