Other images were mostly depictions of animals, including a snake, a lizard-like figure, and three macropods including kangaroos, wallabies and quokkas.

A kangaroo painting created over 17,000 years ago by Aboriginal artists has been identified — with a little help from some ancient wasps — as Australia's oldest intact rock art. The two-metre-long artwork on the sloped ceiling of a rock shelter in Western Australia's Kimberley region was painted in an early naturalistic style, which often features life-sized renderings of animals, according to research published Monday. Scientists worked with the local Aboriginal community, who can trace their heritage in the region back tens of thousands of years, to establish the age of original rock artworks, many of them worked and reworked over millennia. 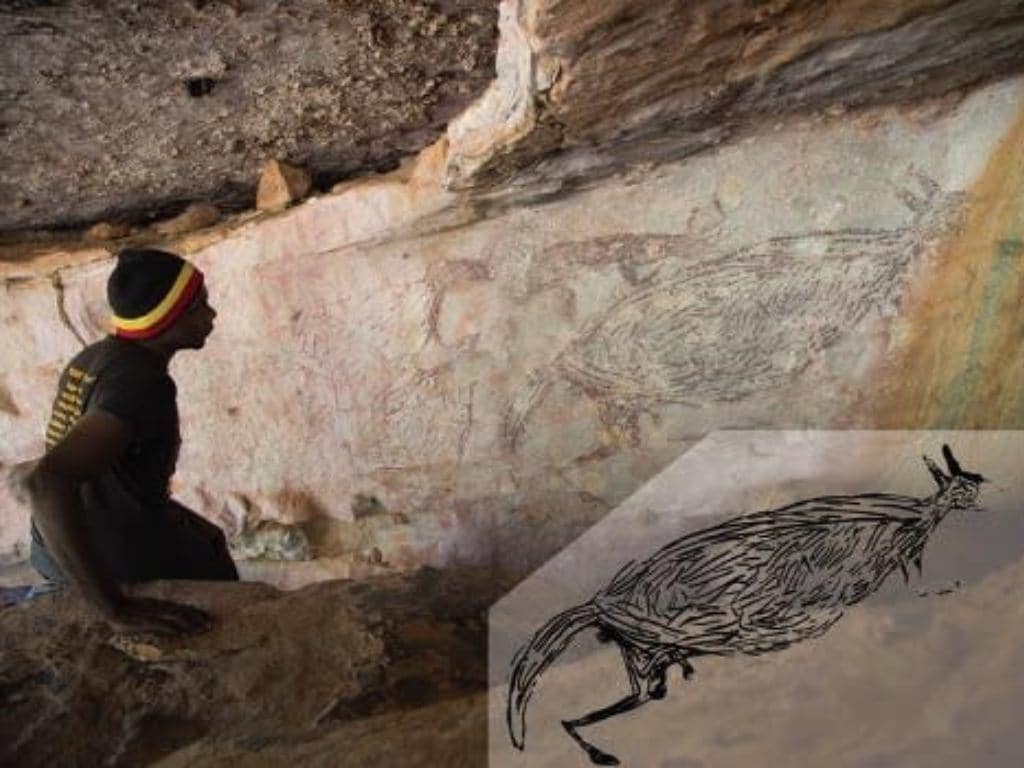 Traditional Owner Ian Waina inspecting another Naturalistic painting of a kangaroo that we determined to be more than 12,700 years old, based on the age of overlying mud wasp nests. The inset is an illustration of the painting above it. Picture: Peter Veth and the Balanggarra Aboriginal Corporation, Illustration: Pauline Heaney/University of Melbourne

"The main challenge, globally, in dating ancient paintings is that they very rarely employed a pigment that can be dated with any of the current, quantitative dating techniques," lead author Damien Finch, a geochronologist at the University of Melbourne, told AFP.

To get around this the researchers identified a way to work out the age of the painting using ancient mud wasp nests. Finch and his colleagues found that some of the rock paintings had the remains of these nests — which can be radiocarbon dated — above and below the images. They estimated that the kangaroo painting was between 17,500 and 17,100 years old, the oldest discovered to date.

"It's important that Indigenous knowledge and stories are not lost and continue to be shared for generations to come," said Cissy Gore-Birch, head of the Balanggarra Aboriginal Corporation, in a statement from the University of Western Australia.

She said partnerships could weave together traditional knowledge with western science, adding that the dating of the oldest known rock shelter painting "holds a great deal of significance for Aboriginal people and Australians and is an important part of Australia's history."

In total, the team dated 27 mud wasp nests around 16 different paintings from eight rock shelters and found that the artworks in this same naturalistic style were produced between around 17,000 and 13,000 years ago.

The images were mostly depictions of animals, including a snake, a lizard-like figure, and three macropods — marsupials including kangaroos, wallabies and quokkas.

"This is a significant find as through these initial estimates, we can understand something of the world these ancient artists lived in," said Finch in a statement, adding that the environment would have been cooler and drier than today.

"We can never know what was in the mind of the artist when he/she painted this piece of work more than 600 generations ago, but we do know that the Naturalistic period extended back into the Last Ice Age."