JAXA releases images that show details of the pockmarked surface of the asteroid that Hayabusa2 bombed.

On 5 April, Japanese spacecraft Hayabusa2 sent a "small carry-on impactor" (SCI), a cone-shaped device capped with a copper bottom, to bomb the surface of the 3,000-foot-wide (900 meters) asteroid Ryugu. An operation which took the spacecraft 40 minutes to finish.

Recently JAXA, the Japanese Aerospace Exploration Agency released a video complied from images, taken by Hayabusa2, of the explosive reaching the surface of the asteroid. However, there is no actual video of the bombing because the spacecraft ducked behind the asteroid to protect itself from the explosion.

This video shows the descent of the SCI (Small Carry-on Impactor) made from images captured at 2 second intervals just after separation from Hayabusa2 by the onboard TIR (Thermal Infrared Camera). In the background, you can see the surface of Ryugu 500m away. pic.twitter.com/O5niPDb2XI 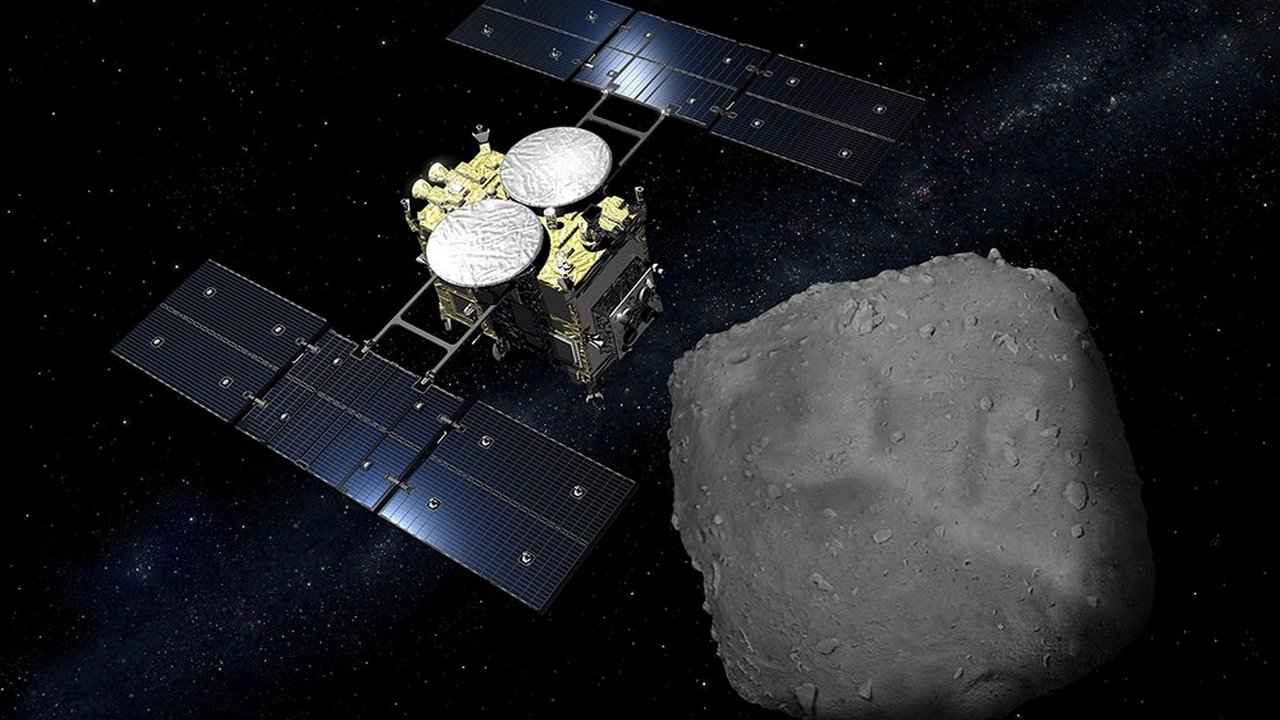 A camera called DCAM3 that accompanied the SCI payload has been able to capture actual images of the explosion itself.

The scientists hope to retrieve some of the subsurface material that was dislodged by the bombing so that they can analyse it on Earth after the spacecraft returns.

[SCI] The deployable camera, DCAM3, successfully photographed the ejector from when the SCI collided with Ryugu’s surface. This is the world’s first collision experiment with an asteroid! In the future, we will examine the crater formed and how the ejector dispersed. pic.twitter.com/eLm6ztM4VX

The spacecraft has been studying the asteroid for nearly a year, since June 2018. The Hayabusa2 spacecraft over the course of it's mission made a brief landing on Ryugu and later fired projectile onto the asteroid's surface. These contacts are designed to help scientists understand the space rock better and what it could tell us about the early days of the solar system.

Hayabusa2 had initially deployed two little "rovers" called MINERVA-II1A and MINERVA-II1B on 21 September. MINERVA stands for the "Micro Nano Experimental Robot Vehicle for Asteroid, the second generation. The first generation MINERVA was part of the original Hayabusa mission to the asteroid Itokawa.

Unlike the Mars explorer Curiosity that rolls around, MINERVA-II1A and MINERVA-II1B will hop from place to place due to their small, rotating motors. Another rover named MASCOT is scheduled to be deployed in October, and a third rover, MINERVA-II2, is expected to land next year.

Hayabusa2 will be sent back to the scene of the bombing to investigate, take images and collect the samples. It will then return to Earth, by the end of this year, with its precious cargo.