ISRO hasn't attempted to launch more than two military satellite missions in a year so far.

India's year in space began with two surveillance satellites being launched for the Defence Research and Development Organisation (DRDO). The first was MicroSAT launched in January, which reportedly served as target practice for DRDO's controversial anti-satellite test conducted on 27 March. The second was EMISAT, an electronic intelligence satellite for DRDO that was launched on the PSLV-C45 mission on 1 April.

This appears to be only the start of a fairly military-dominated launch roster for ISRO over 2019, a report in the Times of India says. The slew of advanced military satellites coming up will "enhance surveillance capabilities" of the country's security forces and boost "strategic assets" in space, the report goes on to say.

ISRO has the launch of four new RISAT satellites planned this year, along with an advanced Cartosat-3 satellite. The IRNSS-1 satellite integrated with PSLV-C31 (centre) with two halves of the heat shield on either side. Image courtesy: ISRO

Radar Imaging Satellite (RISAT) is a series of remote sensing satellites built and operated by ISRO.

The launch of RISAT-1 came many years after the launch of its planned successor, RISAT-2, which had enhanced remote sensing capabilities courtesy of an Israeli-built X-band radar. The RISAT-2 mission and launch were prioritised over RISAT-1 after the 2008 Mumbai attacks, which delayed RISAT-1's launch by several years to 2012.

RISAT-1 made a name for itself after images taken by the satellite were used to carry out the surgical strikes after the Uri attack in 2016 and, more recently, air strikes on the Jaish camp in Pakistan.

Now, ISRO is building RISAT-2B, to be launched on the PSLV-C46 rocket in May, followed by the RISAT-2BR1 in July, RISAT-2BR2 in October and RISAT-1A in November this year. 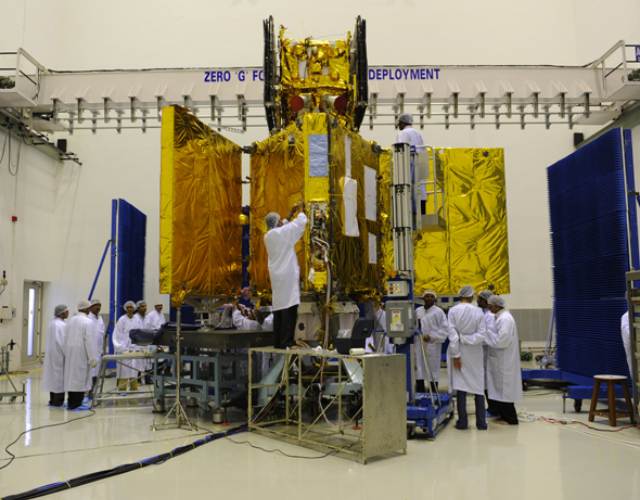 CartoSAT-3 is third in a series of earth observation satellites built by ISRO. It is, however, a variant of its predecessors, built specifically for defence capabilities with advanced remote sensing tools. CartoSAT-3 will be a leap of advancement over CartoSAT-2, with far better spatial range and resolution, according to a report in The Hindu.

CartoSAT-3 is one of the most advanced imaging satellites ever built by ISRO, capable of producing images considered the most high-resolution in the world. It will have powerful capabilities in multiple different spectra: panchromatic (captures all visible colours of light), multispectral (captures light within specific ranges in the electromagnetic spectrum) and hyperspectral (captures light from across the electromagnetic spectrum) earth observation mission, the Hindu report says.

CartoSAT-3 will be launched in the PSLV-C47 mission this May. An image captured by Cartosat-2 of BKC and the Mithi River in Mumbai on 18 February 2017, its first day of operation. Image: ISRO

The speedy launch of five new satellite missions in the short span of one year hasn't been done before, and is part of a boost to defence assets amid heightened tensions along the Pakistan border and increased naval activity by China in the Indian Ocean, ToI reported.

Also planned for later in the year is the construction and launch of a brand new series of remote-sensing satellites, the Geo-Imaging Satellite (GISAT) series. GISAT carries imaging and radar tools to map land area in multiple wavelengths of light and resolutions.

GISAT could be useful for purposes both military and civilian. Whereas so far, land mapping satellites could survey a specific area only once in 22 days, GISAT will speed that up monumentally by scanning and mapping any specified area every alternate day. It will provide live, real-time images of large areas of India if conditions are not cloudy.

Other (non-military) ISRO missions planned this year are the Chandrayaan-2 launch and the first test demonstration of a new series of launch vehicles, a mini-PSLV rocket called the Small Sattelite Launch Vehicle (SSLV).