ISRO summarizes its biggest wins in 2018 & shares a roadmap of its endeavours in 2019.

In a start-of-the-year briefing on 11 January, the Indian Space Research Organisation (ISRO) summarized its accomplishments over 2018 and shared a roadmap for its endeavours in 2019. ISRO wound up the year with 17 successful launch vehicle missions, 9 spacecraft missions, a successful crew module demonstration for the GSLV Mk-III rocket, and a record for launching the heaviest satellite ISRO has built and launched till date, the GSAT-11 into orbit.

From finally dropping the veil and giving us a date for the 800-crore Chandrayaan-2 project, to talking about an opening of a new Centre for India's human spaceflight program, @isro gave a glimpse of what's in store! For more information head here: https://t.co/4cHLPkw3Qx pic.twitter.com/Id1K1EsYci

The first session of the UNNATI (UNispace Nanosatellite Assembly & Training by ISRO) outreach program will be inaugurated later this month on 17 January, the Chairman said.

As part of the program, participants from other developing countries will be trained in building nanosatellites at U R Rao Satellite Centre in Bangalore. Each batch will be for 8-week duration, and the first batch starting this month will include 32 participants from 18 countries, according to ISRO.

The Samwad with Students (SwS) is another one of ISRO's new outreach initiatives, where the Chairman interacts with students about opportunities and plans for ISRO and India in space. After the first edition of the interaction was a raging hit, the second is planned for 20 January with students in Cochin, Sivan said.

Dr Sivan also spoke of India's second lunar mission, Chandrayaan-2, planned for mid-April this year, and its maiden manned mission to space, 'Gaganyaan' by 2021-end, which may include a woman astronaut.

Much of the suspense around #Chandrayaan2, #Gaganyaan & #ReusableLVs was put to rest today in a briefing by @ISRO's commander-in-chief.
Here's @woman_rednow with the four biggest takeaways! pic.twitter.com/qij9u1unlp

The space agency had earlier said Chandrayaan-2 will be launched in a window from January- 16 February 2019, but due to pending tests that require more time, the agency has revised the launch window to the next available launch window for a moon mission.

"Chandrayaan is scheduled for March-end to mid-April. Most probably, targeted (launch) date will be in mid-April," Sivan said. "If we miss April, it will go to June. But, we will be targeting April," he said when asked about the delay and next available window.

The Rs 800-crore Chandrayaan-2 mission takes overs from the Chandrayaan-1 mission nearly a decade ago, also packing an indigenous lander and rover this time around in addition to the orbiter that Chandrayaan-1 did. 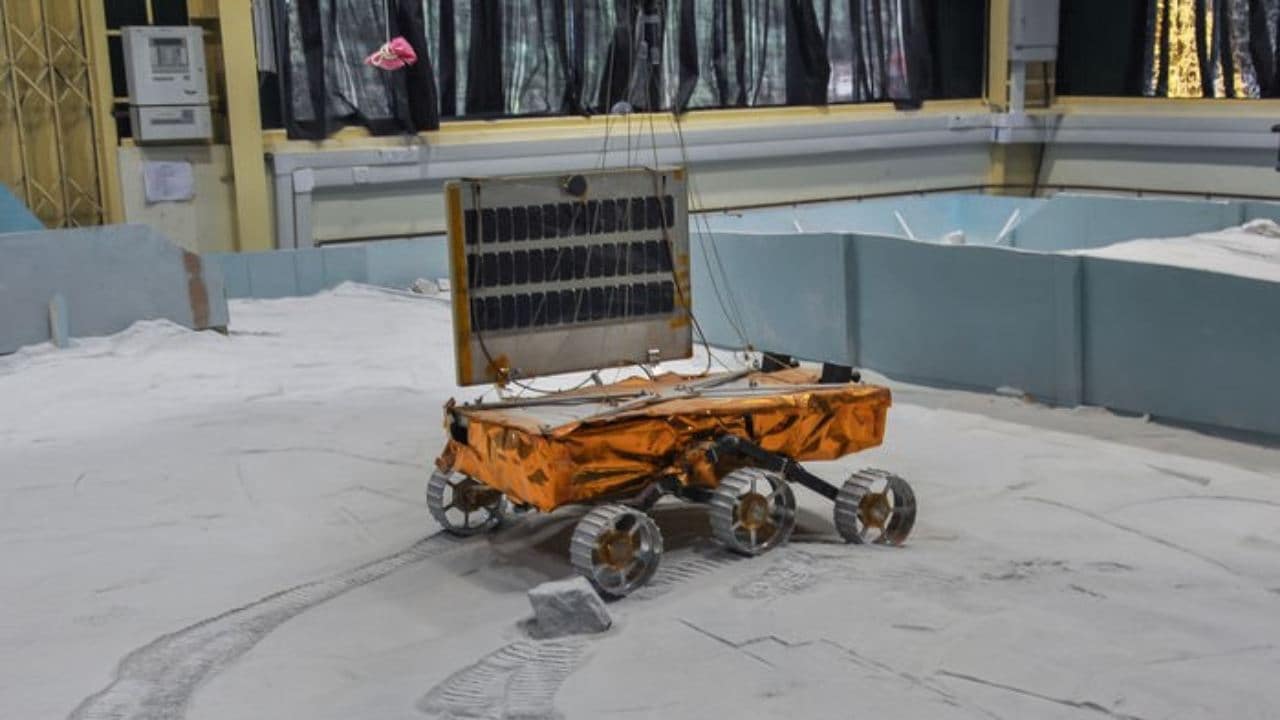 After a controlled descent onto the moon's surface, the lander will make a soft landing at its designated landing site and release the rover. The six-wheeled rover will move around the landing site on the lunar surface in a semi-automated mode operated by ground commands. Instruments on the rover will sample and study the lunar surface and relay the data to Earth via the orbiter. This study of lunar soil, also known as regolith, is a first for ISRO.

It may take up to 45 days for the spacecraft to reach the Moon after the launch, as ISRO has planned six orbit-raising manoeuvres, Sivan said. At full throttle, the same could be done in just 4 days, but the manoeuvres will help conserve fuel and extend the life of the spacecraft, Sivan added. China's Jade Rabbit-2 rover makes its first wheel tracks on the far side of the moon on 3 January, 2019, after rolling down from the Chang'e 4 lander. Image courtesy: CNSA

Asked about India and China competing in the space race for a place on the moon, Sivan said that we (India) are nowhere behind China. "China has landed on the far side of the Moon...and we are landing at a place on the moon where nobody else has gone — the Moon's south pole."

"It is an unexplored region, lots of water is expected. ..we are also going to create history," he said.

Gearing up for its maiden human spaceflight mission, ISRO will set up a new centre this year to facilitate all the research and development going towards the 3-manned space mission planned for 2021/2022. Calling Gaganyaan a "major turning point" in ISRO's journey as a space agency, Sivan said it is contributing in a massive way to the space agency's expansion and growth.

The engineering aspects of Gaganyaan includes the launch vehicle, crew module and service module — which ISRO has expertise and capability in developing. However, the agency is faced with unfamiliar terrain in other aspects of the mission — crew selection, training and creating a life-support system suitable to survive the Gaganyaan crew.

"To carry out this job we have worked out a new management structure in ISRO. We have been working on this structure for many weeks, and today I'm happy to declare that for the first time in ISRO, a major centre for human space programme called the 'Human Space Flight Centre' is being set up," he said. Narendra Modi during the Independence Day speech from Red Fort in New Delhi on Wednesday. PTI

The Gaganyaan mission isn't going to end with launching a human in space, Sivan said. The program will require ISRO to make big expansions, and bring new activities and plans into the fold. The new nodal Centre for human spaceflight will cater to all the technology development relating to astronauts and potentially a space station project under ISRO in the near future.

For now, the centre will take over all activities related to the human space programme, Sivan added.

Senior ISRO scientist Dr Unnikrishnan Nair will head the division as Director, while Dr R Hutton, who was previously head of the PSLV project, will fill in the shoes of Project Director.

Gaganyaan is the "highest priority" in 2019, Sivan said, with plans for the first of its unmanned missions in December 2020 and a second in July 2021. The manned mission is then scheduled for December 2021.

All crew members on board will be Indians, and the astronaut training will be largely done in India, Sivan said. "Our Institute of Aerospace Medicine (IAM) has a (basic) system (for training), but some of the advanced training may have to be done outside the country, mostly in Russia."

When asked about women crew members, Sivan said, "We want women astronauts to be there also. That is our aim. In my opinion, we have to train both men and women." The ISRO spacesuit for astronauts in the Gaganyaan mission displayed at the Bengaluru Space Expo. Image: Twitter/Nagarjun Dwarkanath

On how the astronauts will be selected, the ISRO chief said, it would only be done by the Indian Air Force. "At the final stages, we may involve foreign agencies also."

The fourth stage of the PSLV is something ISRO intends to experiment with in early experiments of reusability this year.

In an upcoming PSLV-C44 mission, ISRO is testing an extended use of the PSLV rocket's fourth stage for six months after launch. The six-month-period will allow for some of ISRO's chosen student projects to carry out experiments in space free of cost. The PSLV-C44 mission is slated for launch between 24 and 26 January, 2019.

When asked how the reusable launch vehicles might work, Sivan said that they wouldn't be vertical landers like SpaceX's Falcon 9 reusable boosters. Instead, they would land like an airplane on a runway once their intended launch is complete.