Is the deep water sea project in Kerala an environmental and livelihood threat?

When the construction of the port began, locals said that it would cause coastal erosion, looks like its coming true.

The mighty Arabian Sea could be seen advancing rapidly onto the coast, destroying, almost completely, the lone road that runs parallel to the famous Shanghumukham beach, which connects Kerala’s capital Thiruvananthapuram with its domestic airport. Vehicles bound for the airport had to take the extreme risk of traversing the portions of the road which the sea had eaten into in the absence of an alternative route. A little away, police constables could be seen cordoning off the beach with ropes and safety barriers, as the district administration had by this time banned the entry of tourists into the area on account of the continuing sea erosion.

With the sea continuing to erode the airport road, the administration is now soliciting scientific and technical assistance for the reconstruction of this road through an alternative route skipping the Shanghumukham beach area. At the Vizhinjam port construction site, with the sea wall in the background. Image credit: Sayeed Shiyaz Mirza.

Within the city, loudspeakers could be heard cautioning people against offering Karkidakavavu bali (a Hindu ritual) at Shanghumukham beach in view of the heavy depletion of land mass caused by the constant buffeting of waves ever since the onset of the monsoon this year. People were advised by the authorities to offer the ritual at safer locations such as Varkala, Thiruvallam, Aruvikkara, Aruvippuram, and other ghats in the district. At many places on the Thiruvananthapuram coast such as Kovalam, Valiyathura, Bheemapalli, Vizhinjam and Veli, the might of the waves is destroying the sea walls and continuing to devour large tracts of the beach.

In fishing villages like Valiyathura, Kallumoodu and Muttathara, 603 people from 143 families have already been shifted to relief camps after their houses had been devoured by the sea. Local schools and community centres have been turned into relief camps and more families are expected to land up in them in the coming days with the sea continuing to remain hostile during this season.

“These are all recent phenomena that started occurring ever since the construction of the Vizhinjam International Port began. The entire coastal region and the lives of the fisherfolk are now under threat. People in the city are only worried about the lack of connectivity to the domestic airport, and are least concerned about the Adimalathura-Poovar Road, the lifeline of the fishing community, vanishing. In places such as Vettukad, Kannamthura, Kochuthoppu and Cheriya Thura coastal erosion has destroyed houses, schools, dispensaries, community halls and centres of worship. We are in a do or die situation,” laments T. Peter, secretary of National Fish Workers Forum and a resident of Veli beach. ​According to him, once the 3,000-metre breakwater reef is completed, the Thiruvananthapuram airport and the Indian Space Research Organisation (ISRO) units located on the coast would feel the repercussions. “When dredging started adversely affecting the marine life here, fishermen began switching over to other jobs. What we require is a long-term solution,” said Peter.

The Rs 7,525-crore seaport is being implemented by Adani Ports and Logistics as the concessionaire for the Government of Kerala’s Vizhinjam International Seaport Ltd. Ever since the construction began four years ago, the fishermen and the local community have been expressing their apprehensions about the port causing large scale coastal erosion.

On land reclaimed from sea

Expected to be commissioned in October 2020, the multi-purpose deep water sea port coming up in 360 acres of land (of which 130 acres have been reclaimed from the sea) would be the largest of its kind in the country when complete, compared to existing ports.  As per claims, it can handle 80 percent of the country’s cargo trans-shipments. The Kerala government, which once claimed the port would not cause any disturbance to the ecology of the coast or livelihood, has now admitted that there is an element of truth in the allegations raised by the fisherfolk here.

At a recent meeting on coastal livelihood issues, Kerala Fisheries Minister J. Mercykutty Amma said the construction of the breakwater reef for the port has had repercussions on the lives and livelihood of the fishing community in Thiruvananthapuram district. 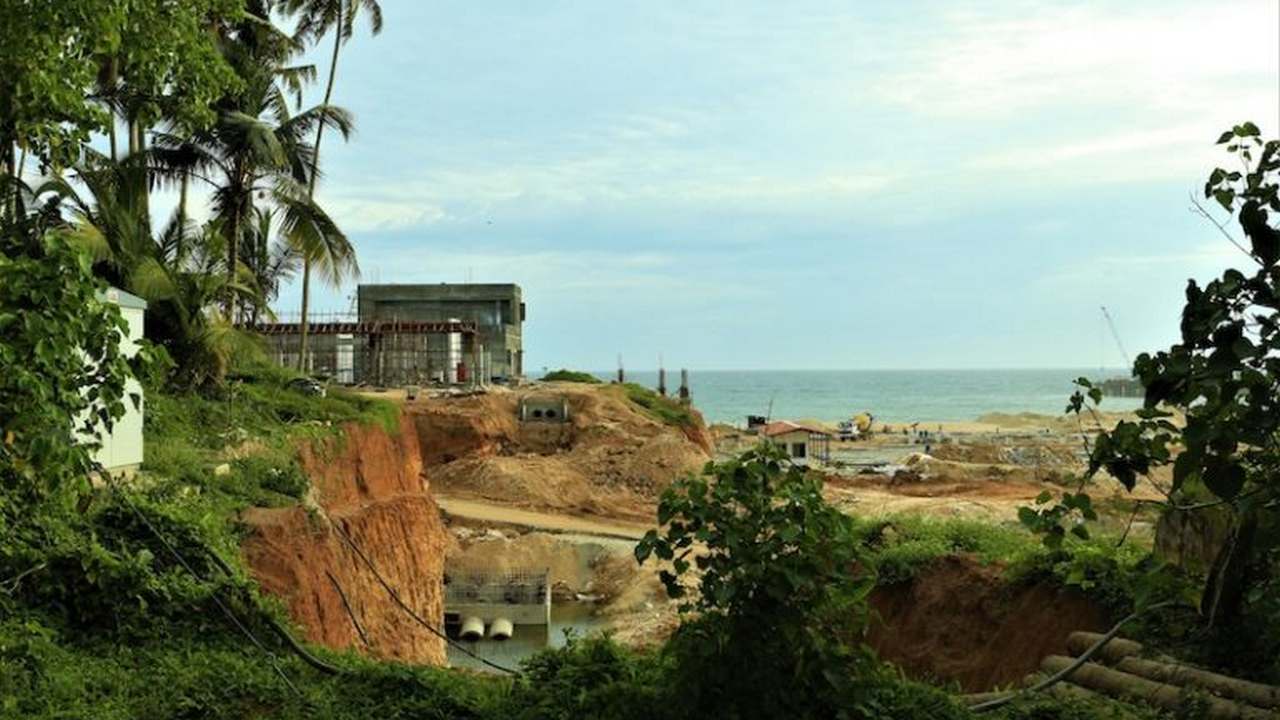 “There were assertions that the port wouldn’t have any impact on coastal livelihood and ecology. But now we are finding that there are repercussions,” the minister said.  The breakwater reef, when completed, would be 3,000 metres long. Now only the first 600 metres of it have been completed, and already the sea has been responding in a ferocious manner, causing huge tides,” the minister said. “We need development, and we are not in a mood to scuttle the port project. Our focus now is on alternatives and solutions that can minimise coastal erosion. In all probability, the problem will get worse when the construction of the breakwater reef is completed,” she added.

According to Richens Morais, a fisherman in Vizhinjam, the minister’s statement had vindicated their stand on the issue. “Coastal erosion has been aggravating during the monsoon every year ever since the dredging for the port began in 2015. Mighty waves have been destroying houses in the coastal region, and those living in them are forced to move into relief camps. Even the sea walls have failed to protect our houses,” he said.

“Curiously, the crucial issue of coastal erosion has not been sufficiently addressed in the environmental impact assessment of the project,” alleges A.J. Vijayan, a Thiruvananthapuram-based expert on coastal issues. He said the National Centre for Sustainable Coastal Management, a government body, had many times pointed out that the coastline in Thiruvananthapuram district was more prone to erosion than the coastline in other districts in Kerala.

“As far as Vizhinjam is concerned, neither the changes that human intervention could bring about have been analysed, nor have the effects of the erosion and shoreline build up been seriously discussed. The terms of reference for environmental clearance specify that the project should not be implemented in high erosion zones,” he said. According to Vijayan, the construction of breakwater reef along with the dredging of underwater rock and sand-mining would further undermine the security of the coastal villages adjacent to Vizhinjam. According to fisheries scientist K.V. Thomas, an ecologically sensitive area known as Wadge Bank, where abundant varieties of fish breed, is not far from the Vizhinjam coast, and constant movement of ships through this pocket could severely affect fishes’ sustenance.

“Though it is very late, what the region requires is an expert study on how to protect lives and livelihood of the fisherfolk in villages in and around Vizhinjam, which has a long history of beach erosion. Now, with the construction of the breakwater reef the situation seems to be getting out of control. The first breakwater reefs in Kerala came up here in 1970 when the fishing harbour was built. Erosion is affecting the sand movement in the ecosystem. The beaches most eroded are on the northern side of Vizhinjam, areas that include Panathura and Poonthura, while there is sand accretion in the villages on the southern side,” says Thomas. During monsoons, sand and sediments move from the south to the north. Breakwater reefs obstruct this natural movement, and as a result, sand and sediments tend to stay on the southern side of the structure, resulting in accretion in the south and erosion in the north.

Extensive damages to houses and property

According to Sheeba Patrik, Valiyathura ward councillor in Thiruvananthapuram City Corporation, beach erosion begins in Vizhinjam every year with the onset of the southwest monsoon. Last year, as a result of erosion, the concrete building of the National Centre of Earth Science Studies collapsed and the Valiyathura pier was damaged.

“Three rows of houses have been lost in sea erosion here in the last four years. There was a time when local children played football on the beach. Now the whole area has been swallowed by the sea,” said Vipin Das Thottathil of the Coastal Students Cultural Forum.

Officials at Adani Group, when questioned by Mongabay-India in person and over the phone, preferred not to talk about the apprehensions of the local community. The minister’s office said efforts were on to constitute an expert committee to look into the fears and anxieties of the coastal community. A livelihood impact assessment committee is in place with the district collector as its chairman, it has however, failed to address the core concerns of the local community so far. Meanwhile, sources in the company said the company was doing a lot of charity work for the fishermen community but belives that rehabilitation and resettlement are matters that should be addressed by the state government.

Interestingly, just a week ago, the Kerala coastal zone management authority (KCZMA) decided to issue clearance to the temporary barge load-out facility and transit stock yard meant for storing and transporting rocks to Vizhinjam for constructing the breakwater reef. KCZMA had earlier denied clearance following a writ petition filed in the Kerala High Court against the construction of the load-out facility without obtaining CRZ clearance.

It was in August 2015 that the Kerala government and the Adani Group signed an agreement on developing the Vizhinjam International Deepwater Seaport Project. The agreement courted controversy after the Comptroller and Auditor General, in May 2017, released a highly critical report questioning the project’s viability and the manner in which it had been awarded to the Adani group. A three-member judicial commission, headed by retired Kerala High Court judge C.N. Ramachandran Nair, was formed to probe into the allegations raised by many people against the project. The commission is expected to give its report in a couple of months from now. In the meanwhile, construction works were initiated following clearance from National Green Tribunal.