The Western Ghats, older than the Himalayas, stabilised after going through many climatic variations since its formation.

Our earth has taken billions of years for its formation and to bring life forms on it. It is the only living planet that we are aware of. Every natural system is so well engineered that most of it still remains beyond our knowledge. The Western Ghats, known to be older than the Himalayas, stabilised after sustaining severe climatic variations ever since its formation.

The combination of rich vegetation, porous soil and rocks on the mountains helps in percolation, making water sources and rivers perennial, with a large quantity of water available continuously. The landscape is also ecologically sensitive because of the same factors. Change in rainfall and land-use patterns

With the mountains blocking the south west monsoon winds from the Arabian Sea, receiving continuous heavy rainfall of 125 to 250 millimetres a day was quite normal in the Malnad area, a region in the Western Ghats in the southern state of Karnataka. The number of rainy days ranged between 90 and 120 with an average annual rainfall of about 1500 to 3000 mm.

But, in the last few years, the rainfall pattern has changed drastically. Chikkamagaluru district in Karnataka, in recent days, along with other areas of Western Ghats, has witnessed the worst climate disasters in their history. While prima facie it may seem that global warming and climate change are playing a role, there can be no denying that land-use change has also contributed to this calamity.

Floods and landslides in the human habitation areas with undisturbed forests remaining unaffected by heavy rains is proof enough for the whacking disturbance caused by people in the landscape. It is also observed that major affected areas during the calamity are repeatedly disturbed water catchment and sensitive areas categorised as ‘highly susceptible to landslides’ by Geological Survey of India. To name a few – Balur, the birthplace of river Hemavathi; Kalasa, the catchment of river Bhadra, Shringeri, the catchment of river Tunga and Charmadi Ghats of Chikkamagaluru.

Normally when it rains, water first seeps into the earth. After absorption, the land leaves out the excess water that flows in the form of rivers. Steep mountains evolved with a flowing water system with hardly any natural stagnant water bodies. Water flow is naturally broken and slowed down at every stage by grass, shrubs, trees and other vegetation.

It is therefore that many rivers taking birth in the Western Ghats, unlike the north Indian rivers, do not have rapids. The slow movement of rivers, availability of plenty of water throughout the year and rich biodiversity have been complementary factors in Malnad. 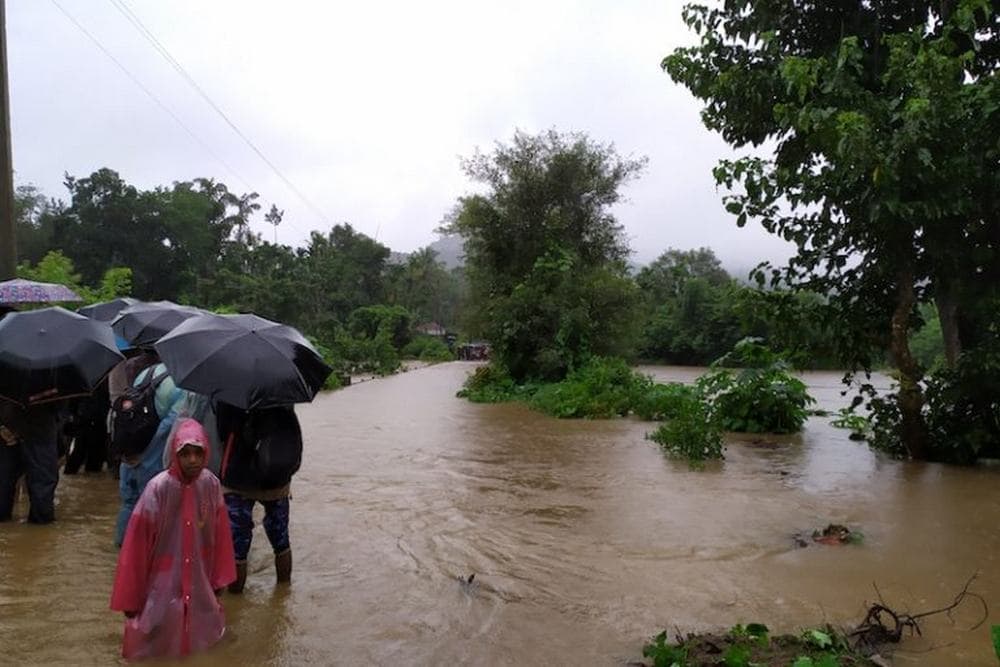 Moving away from a culture in tune with nature

The culture and livelihood practices of people in Malnad also was in tune with the landscape and ecology. Rain, rivers, fire, air, wildlife, forests and trees were worshipped, as the ancestors knew the power of natural forces. Very few people lived on the mountains in scattered areas and practised organic farming. Paddy was grown in swamps and marsh lands and coffee with natural tree cover on the hills. Cultivation of land supported the natural process of retaining water in the valleys and maintaining temperature on the mountains.

There was a culture inclined more to food and clothing based on respect to land. There was a specific time for every activity influenced by natural factors – a time to sow, to harvest, to extract trees, to restrict diet etc. All of this seems to be a forgotten culture today.

Without giving much importance or understanding of the structure, land has been repeatedly assaulted in various ways, the severity of which probably increased in the last 15 to 20 years. Commercialisation has taken a toll on nature. Forest spread has drastically reduced with increasing human population and growing needs. The way our land was used, has been modified as opposed to the natural geography of the area.

Water in catchment areas is collected and stored at the source itself in plantations for irrigation purposes, without allowing it to flow its natural course. This is a trend that did not previously exist. To give a rough calculation of water stored in these tanks – a one acre land with a five feet long embankment stores up to 220,000 square feet or 6,230,400 litres of water weighing 6,230 tonnes. Going by the thumb rule calculation of construction industry, this weight is roughly equivalent to a building with at least 50 houses of 1,200 sq. ft. area each. If every 50-acre coffee plantation has a water tank of this size, one can imagine the pressure built up on these sensitive lands. Adding to it are the numerous mini hydroelectric projects, check dams and reservoirs that store huge quantities of water.

Trees that play a vital role in maintaining the temperature are fast disappearing. Arabica plantations of coffee have been converted to robusta on a massive scale. As a result, native growth shade trees in the coffee plantations, that naturally maintain humidity for coffee cultivation, have been removed and artificial humidity is created using sprinkler system and stored water. With the recent introduction of Brazilian way of growing coffee directly under the sun as opposed to the traditional way of growing them under the shade, the tree cover in plantations has further deteriorated. 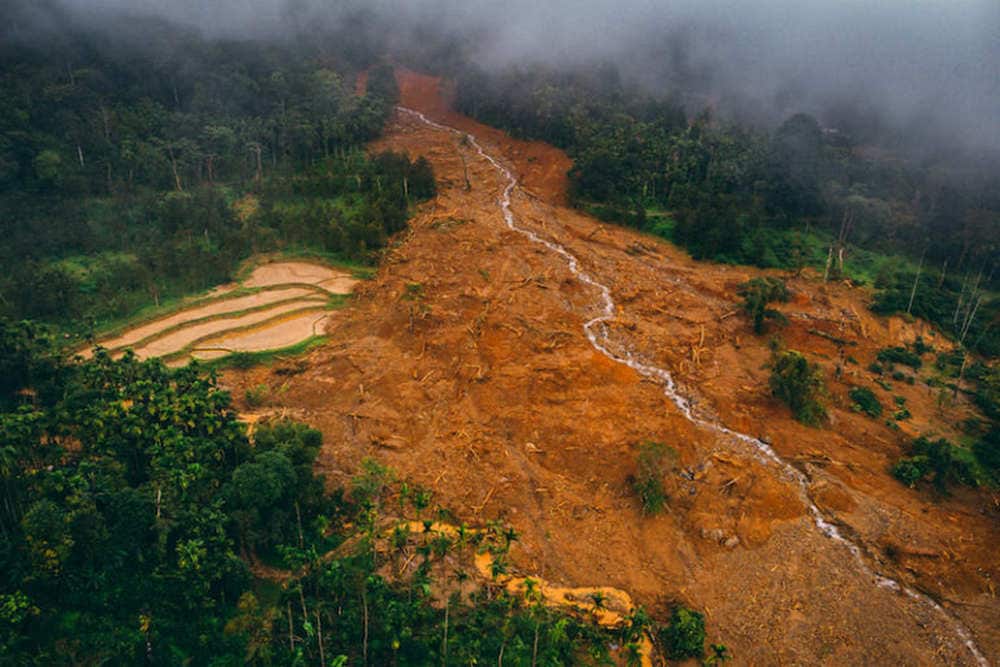 Even wherever trees are seen, native species have been replaced by monoculture of silver oak. Widening of roads is also wiping out hundreds of years old trees on the roadsides. Permanent loss of natural canopy has increased temperature and exposed the fragile lands directly to the sun and rain.

Many paddy fields have also disappeared and are mostly replaced by areca nut plantation. Even worse is that the fields have been turned into residential plots, concretised into houses, homestays, hotels and resorts. So the majority of the marsh lands are gone and water has been completely drained. This is a dangerous trend that is moving towards coffee plantations too.

Extreme use of weedicides and pesticides in farms and plantations have killed the fertility of soil in addition to insects, birds and other small creatures that play a vital role in the ecological cycle. Further, with the introduction of mechanised earth movers, every area has been excavated and every water stream has been diverted to a damaging level. Legal/illegal sand mining and land grants/encroachment of river beds and forests have been rampant even though they are prohibited under the law.

With the promotion of nature tourism, the inflow of people to these areas have gone up. As per 2016 records of the tourism department, Chikkamagaluru district with a resident population of about one million, recorded the visit of a whopping 8.5 million tourists. To accommodate such a huge number of people, more and more homestays, resorts and tourist facilities have been built. Increased activities, particularly during weekends has caused tremendous stress on limited resources, in addition to the water sources being littered and severely polluted.

Beyond all, large scale development projects such as highways, hydropower, river diversion, pipelines, power lines are implemented by chopping off mountain slopes, clearing forests, blasting rocks with disregard to the susceptibility of the area. Over the years, we have systematically killed the natural balancers and caused irrevocable damage to the landscape. With just one big rain, mountains that withstood climatic variations with great stability for millions of years have become unstable and started to slide down. The land has contracted so much so that water runoffs are very quick and rivers are flowing fast with rapids.

Since there is no percolation, the already exploited groundwater is not recharging and the perennial rivers are running almost dry in summer. Meddling with land has had a direct relationship with hydrology, geography, ecology and the climate disaster. As a result, we have been experiencing severity of both droughts and floods in the last two to three years.

The cost of this ecological imbalance is quite high. As per the official report of Chikkamagaluru district administration, nine people died and 1631 people were displaced due to recent rains. Additionally. In terms of property loss, 950 km of road, 2065 electric poles, 159 bridges, 34 lakes were damaged and 45 villages lost their power connection. Around 1565 hectares of agricultural lands were damaged. All of this accounting to an estimated loss of rupees 1.40 billion to the economy.

In hindsight, it seems that we probably became too complacent in our biodiversity-rich area and conveniently ignored our own tradition and culture towards the land. In the absence of appropriate governance, lack of regulations and guidelines of land use, it is the local population that that face the brunt of the loss and destruction. It is high time that we start respecting the land we depend on, protect our forests and secure our future. If we do not learn now, we never will.

Uttarakhand floods: Easy to point finger at climate change, but humanity is equally to blame