By bringing scientists and leaders closer to society and its aspirations, ISF is seeking to set the narrative for science in India.

Year after year, we see sports, literature, startups, politics, business and religion take centre stage in the news, on television and on social media. Science, however, is limited to the confines of universities, companies and academia in India. Rarely does science and scientific endeavour get the centre-stage attention.

Those keen to know more about the latest and greatest happenings under the broad umbrella of science, are having to seek them out, through digital resources, old-school conferences and seminars. Rarely has science ever been seen as the relatable, engaging and universally-binding language that it is. India and its youth are engaging in science in schools because they're obligated to – little engagement follows once their education is behind them.

Many of us are unfamiliar with how science happens, why it's even necessary or the advances made by brilliant Indian scientists who have put India on the world map. The India Science Festival 2020 is hoping to tackle some of these long-held challenges to science progress in India, says Varun Aggarwal, co-founder of Aspiring Minds, the Festival's key organiser.

"We wished to celebrate science, connect scientists and society in a fun, engaging way. Our imagination of the science festival is akin to that for a cricket match, a Bollywood star show or a Diwali Mela...It isn't a boring talk program in a conference room, it's a festival of science," Aggarwal added.

"We are in a time where innovation is happening at an exponential speed – be it artificial intelligence, biotechnology, neuroscience, quantum physics, medicine – the fields are exploding with new knowledge and methods. India, too, needs to participate in this revolution and frame the right policies to bring the benefits of the science to society."

In his view, mass public engagement in science and science policy is an indispensable means of making this shift.

Tech2: What can we expect at the Science Festival this year?

Varun Aggarwal (VA): The Festival itself will be spread out over many outdoor and indoor spaces. Walking through the front lawn, one might hear conversation on the ethics of artificial intelligence – why some algorithms are biased against a section of society, eg, women, and how this can be addressed. Later, when Nisheeth Vishnoi from Yale University takes the stage, he will tell you whether you should or should not trust an AI system with important tasks when it interprets your medical scan or handles your financial investments.

You can head on over to another space and find yourself levitating balls using your brain waves, with a little band around your head to detect when you're concentrating. This is just a taste of the infinite possibilities that modern neuroscience opens up. From the future, the festival will also transport you to the past – with fascinating discussions in a Roman-style amphitheatre – where you'll be asked to consider a range of things: Did ancient Indians really know organ transplantation? What is India’s contribution to global science? What is "evidence"? Are the scientific works of our ancestors relevant today? The Puzzlebox Orbit is a revolutionary helicopter, which is controlled by brain waves. Image: Kickstarter

After some contemplation, you should treat yourself to some of the food – but careful! Don't run into the driverless vehicle that's been finding its own way from one end to the other avoiding all obstacles in its path. It automatically veers around an interactive digital Rangoli that has been laid on the ground. And speaking of Rangoli, there's an exhibition of AI-generated paintings by Harshit Agarwal that's certainly worth checking out.

And if you're there to  hear from the brilliant minds in attendance, there are  40+ scientists from around the world giving super interesting talks and demoing exhibits, including TED-like talks by undergrads and PhD students, our scientists of today and tomorrow. They need to understand the society’s questions/problems and the society needs to understand their innovations and uses. I'm happy to that ISF can provide a platform to make this exchange happen.

Lastly, there are also stimulating policy roundtables planned – on, for example, how to create an MIT in India – that will be a key part of the Festival.

This is how we can bring science to everyone! In a simple, entertaining, immersive way.

Tech2: What do you see in the future of SciTech in India?

VA: Indian science is a sleeping giant! We have the talent, a rich tradition of scientific endeavour and markets that can support innovation. Yet, we follow and don't lead in this regard. We have been reactive to the internet revolution, the mobile revolution and now the AI revolution. India hasn’t produced the largest global companies or scientific breakthroughs in any of these fields.

India can have a very bright future in science, but that will need our science ecosystem to be liberalised and re-oriented. Let's recall for just a moment what happened when we liberalised our economy in the early 90's – our growth rate doubled or more.

The same is possible for science.

Tech2: What about India's science community makes you proud?

VA: India has a rich tradition of science going back to Panini, who is accepted as the world's first linguist. I recommend everyone interested to attend the panel at ISF on India's historic contribution to science.

If you see the period immediately before our independence, there were many science stalwarts in India – CV Raman, JC Bose, Srinivasan Ramanujan, Homi Bhabha among others. JC Bose did exceptional work in electromagnetics and plant sciences out of his lab in Kolkata. Post-independence, we have been massively hit by talented folks not taking up a career in science research – they either joined the industry or went abroad to better opportunities. This needs to change. 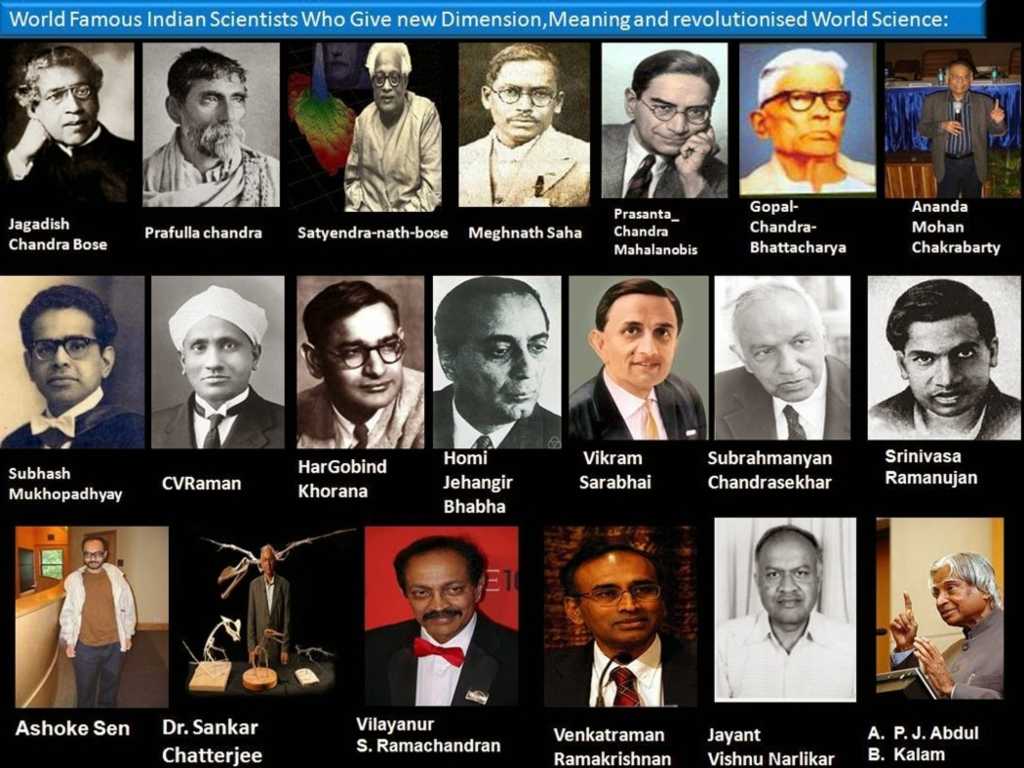 Internationally-acclaimed Indian scientists (it just so happens that all of them are men). Image: Manash Kundu Science Blog

Today, there are sporadic bursts of excellence that take the global stage – like the prime number result from IIT Kanpur, Abhay Bang's work in infant mortality or the Simputer from IISc. They caught the world's imagination, and yet, there is no critical mass of scientists to make an impact on the Indian society and economy, let alone the global science scene. This, too, is a dream waiting to be realised.

Tech2: What are some key things limiting India's scientific progress, in your view?

VA: I would recommend attending the 'How to build an MIT in India?' panel at ISF, where speakers from around the world are addressing this issue.

Here are my two cents. The first issue is intent. We focus a lot on economic growth and social upliftment – and rightly so. But, neither the government nor the public is actively concerned or working to improve India’s standing in science and technology. China, on the other hand, has focused on world-class, cutting-edge science since the early 90's, and today, China is only second to the USA in scientific output in many areas.

India needs a similar laser focus on science and technology to establish itself as a global leader in the field. Once government shows intent, three simple steps need to follow.

The first is a much-needed liberalisation of the science ecosystem – make our universities and researchers autonomous. Let go gladly of government-ordained salaries for researchers, and bureaucratic hurdles to procure equipment and funds! Only when research institutions and researchers have the freedom to do their jobs will they do so to their full potential.

Second, the government is responsible for creating a market in which science can perform. Resources should be allocated based on performance, and accumulated in the highest-performing institutions. The third step will be to rid us of the socialist mindset to science; government and institutions needs to invest in excellence, rather than spreading the money thin on many low-impact projects and institutions. Simply put, if India can create ten world-class research universities, it would usher in a revolution.

Tech2: What do you hope to accomplish with ISF?

VA: With ISF, we are seeking to break the silos, connect the Indian society with scientists, PhD students, policy makers and the international science community. It will attach a name and face to the 'scientists' we read about every now and again, and shed some light on what they work on. 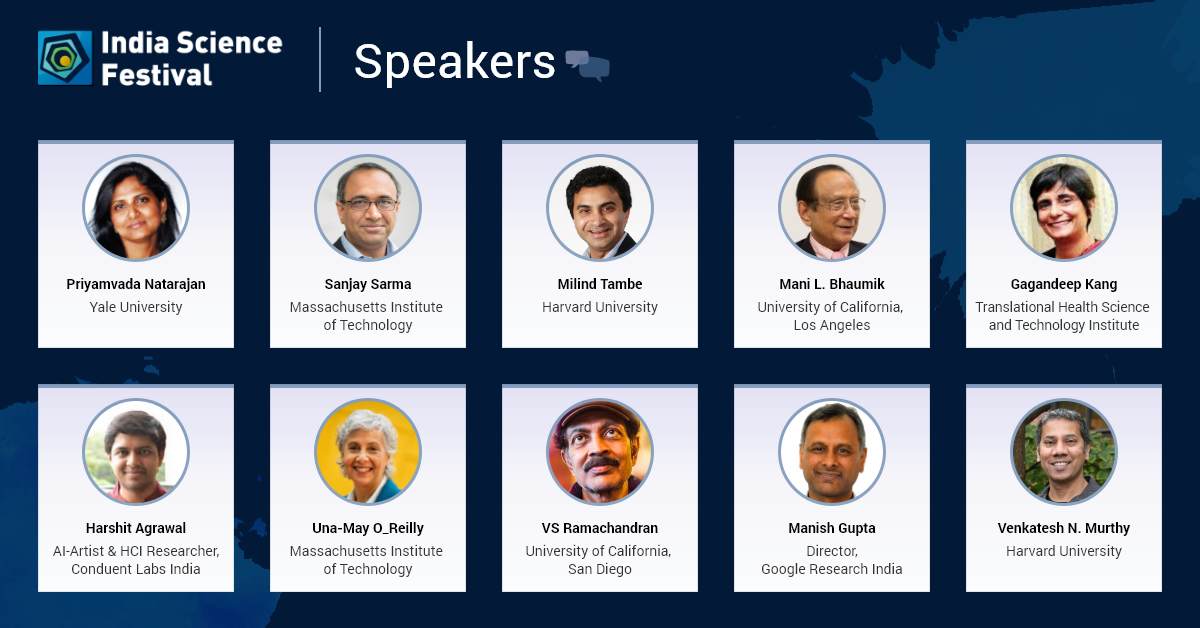 10 of the 30+ speakers at ISF this year. Image: Aspiring Minds

People will experience science through experiments and exhibits. This could be AI-generated art, levitating balls using one's brain waves or experiencing an autonomous vehicle. This will make science cool for everyone. Scientists will also come closer to the problems and aspirations of our society. This connection will get a lot more people to do science, think scientifically and pursue the scientific career.

ISF seeks to set the narrative for science in India. I am confident that when we bring all these different communities together, they will set the roadmap for India's scientific future, and how to get over the current challenges.

You can register for India Science Festival 2020 here.