Owing to such these merits, the global lighting market is witnessing a huge policy-driven deployment of LEDs.

Almost all major cities across the world are anticipated to replace about 50 million traditional light fixtures with LEDs. Currently, there are close to one billion efficient lights (LEDs and CFLs) operating in the US. Among them, LEDs are projected to save approximately 348 trillion watt-hours of energy by 2027.

In India, close to 230 million LED bulbs were distributed under the Ujala Yojana program (May 2017). India's LED market is a mix of domestic and foreign players. The players' share is volatile, as market dominance primarily depends on constant upgradation of innovative technologies.

Imported LEDs (from China, Taiwan and Korea) and the unorganised sector are currently dominating the market. This is due to an absence of national-level standardisation and regulations for the domestic supply chain framework. Indian industry lacks manufacturing technologies and research efforts for the upcoming technologies of the sector.

The first research breakthrough in LEDs came with the application of gallium nitride (GaN) in the early 1990s. At the time, gallium and its alloys showed capabilities of producing 10-100 times brighter luminescence than its predecessor materials, such as silicon carbide. 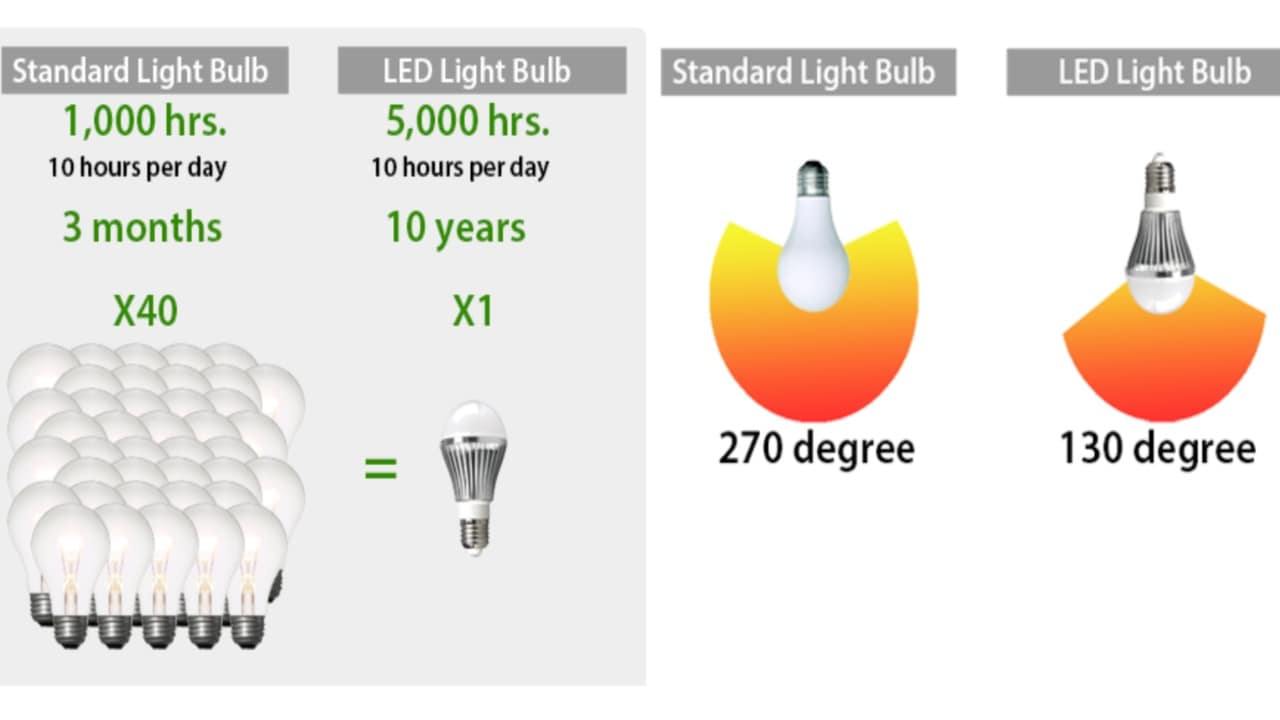 A glimpse into advantages of LED lighting over incandescent. Image courtesy: LimeLED

Currently, there are a wide range of LED applications using gallium nitride, designed for high and ultra-high brightness, such as automotive lights, traffic signals, big screen TVs and the like.

Despite high promise and market opportunities, large-scale adoption of LEDs will depend on improving performance aspects such as efficiency and efficacy.

For example, global adoption of highly efficient LEDs can reduce our carbon footprint up to 800 million tonnes of CO2 equivalent.

Further, with US-DOE's work in Research and Development (R&D) of solid-state lighting (SSL), the lighting efficacy of current LED devices will be enhanced by 25 percent, reaching 200 lumens per watt (LPW) from 160 LPW. So far, the US-DOE has achieved a huge industrial footprint with over 260 patent applications in LED products; the technology is growing laterally.

As a result, many success stories are coming in niche LED lighting, such as marine, harbour, organic, smart lighting and the like. Smart Lighting for cities of the future. Image courtesy: EPR

Smart lighting has grown two-fold in recent years. It has integrated applications such as sensors for public transport movement, signal synchronisations, et al. Similarly, organic LEDs are seen as the next generation of SSL technologies, with applications currently seen in TVs and phones.

In India, lighting constitutes 18 per cent of the total electricity usage. The savings from LEDs, in tandem with smart metering, smart designing and connected lighting will be close to 9-11 percent (50 per cent and more) of the total consumption.

It is imperative that the government constitute a policy framework that can foolproof industry standardisation and regulatory mechanisms in the lighting industry. The Bureau of Indian Standards (BIS) could create standards pertaining to design and manufacturing of LEDs. This will create parity among domestic and foreign competitors.

Similar to the efforts seen in the US, a national level research programme on SSL can focus on improving the working outputs of the upcoming lighting technologies. It will strengthen domestic manufacturing capabilities that can cater to domestic and global demand.

In order to support domestic manufacturing, government can assist by facilitating financial incentives (such as subsidies in capital, production, et al).

The synergy of renewables and energy efficiency measures can enhance the ongoing carbon mitigation efforts and improve our national energy security.