India needs to double down on goals to increase tree cover, but that may still not be enough.

India can save three times its gross domestic product (GDP) and help the world save a million lives a year if it scales up its climate actions to help the global community limit global average temperature rise to 1.5 degrees Celsius (oC), said a World Health Organization (WHO) study released on 5 December, 2018.

This is a more ambitious target than the 2 degrees Celsius agreed upon in the Paris Agreement in 2015.

Doing this would require massive investment, but historical emitters – the rich, industrialised countries – have failed to make good their commitments to provide funds under the Paris Agreement.

“The present scope, scale and speed of climate finance are not only insufficient but not even being discussed properly,” said a paper released by India’s finance ministry on 4 December, 2018, timed to coincide with the ongoing 24th Conference of Parties (COP24) of the United Nations Convention on Climate Change in Katowice, Poland.

India has always championed the developing countries’ demand that historical climate change culprits should pay for mitigation and adaptation. In 2009, at COP15, developed countries agreed to channel $100 billion (equal to the GDP of Delhi) every year by 2020 to help developing countries mitigate climate change and adapt to its effects. The Paris Agreement of 2015 required rich countries to review and scale up this amount from 2025 onwards.

A sneak peek into the ongoings at COP24. Reuters

Now, as world leaders thrash out a “rulebook” for implementing the Paris Agreement – the procedures, guidelines and institutional mechanisms for monitoring, reporting and verification of climate change goals – climate financing and finance accounting should be front and centre of the discussions, the paper said.

Developed countries have not made good their commitment

“A government of India discussion paper in 2015 noted that [the] only credible number is $2.2 billion in 2013-14, if we restrict to country disbursements of actual climate finance on a concessional basis,” the paper said. The remaining money was either not yet disbursed, or not provided as financial assistance but as loans, etc.

“Worse, we have seen attempts to pass this commitment off in the form of commercial loans, straddling developing countries with more unjust debt,” he said.

New climate-specific assistance may be just $16-21 billion (for 2018), the finance ministry paper said, adding, “If the finance for development projects that only partially cover climate change were reported more accurately, annual bilateral flows of public climate finance could be between $10 billion and $15 billion lower than reported.”

The UNFCCC guidelines allow much leeway in climate finance accounting, the paper said. Singh of ActionAid agreed: "It is next to impossible to quantify the total amount received under international climate finance…It's very complex with different countries and agencies having their own definitions. Some even count development and infrastructure projects as climate projects.”

Therefore, developing countries such as India say the rulebook being negotiated at Katowice must clarify accounting procedures.

However, the United States – which has already pulled out of the Paris Agreement--the European Union and other developed countries are skirting the issue of climate finance reporting, as the newspaper Business Standard reported on 6 December, 2018.

Ironically, even an annual $100 billion support, provided in full, would not be enough, the finance ministry’s paper said. “This goal of $100 billion is a meagre amount in size in contrast to the actual needs assessed for developing countries,” it said, adding that even a simple adding up of all the requirements of developing countries mentioned in their climate action plans submitted to the UN climate body came to around $4.4 trillion – about 5 percent of global GDP.

“Without real money for real action, the urgent transition the world needs to make will be impossible to achieve,” Singh said.

Where things stand: Warming, India’s goals, and upping the ante

The earth has warmed by 1 degree Celsius from pre-industrial levels (before the 1800s), and any further increase is expected to have severe effects, from killing 70-90 percent coral reefs, causing hotter days and more frequently, rising ocean levels and temperatures, increasing the severity and frequency of droughts, setting off more wildfires and cyclones, and so on. 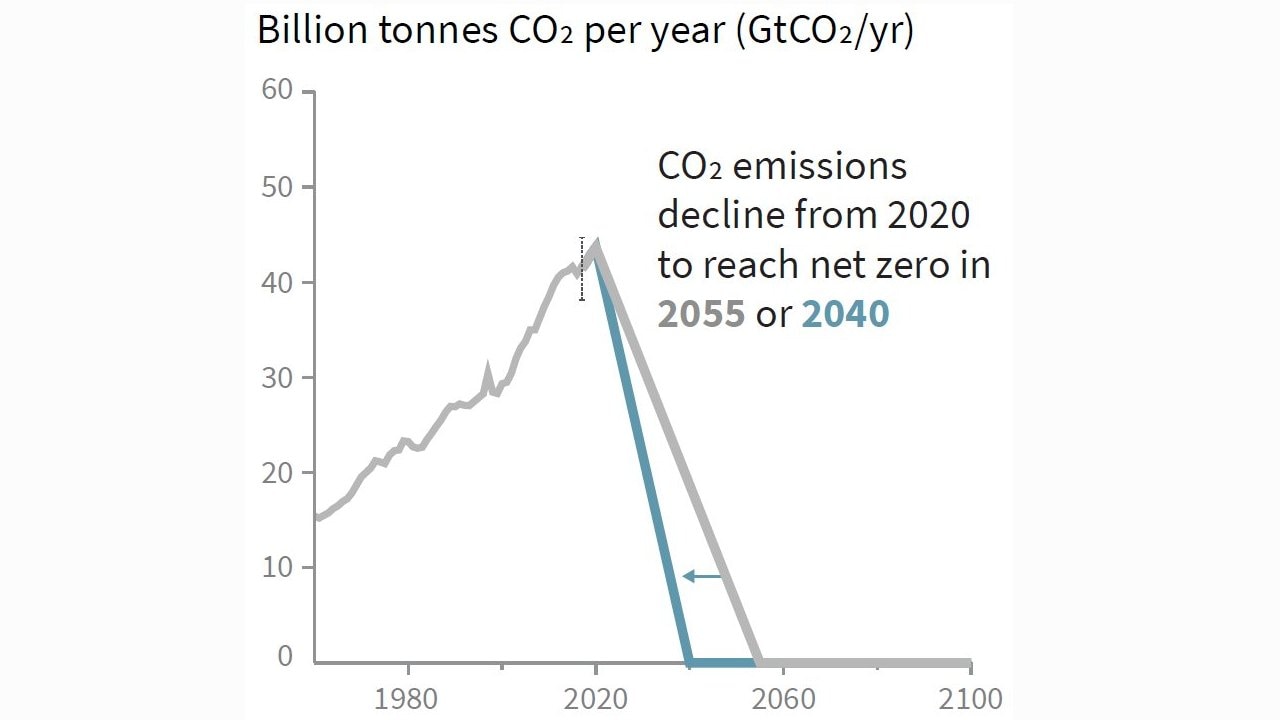 Two strategies for reducing emissions between 2020 to 2040 (blue) / 2055 (grey). Notice the speed of rise of CO2 until today vs how rapidly they are required to fall. Source: IPCC Special Report on 1.5C (Summary for Policymakers)

To meet the 1.5 degrees Celsius target, the world must halve its carbon dioxide emissions by 2030 (relative to 2010 levels). But the four biggest polluters with combined 58 percent emissions – China (27 percent), United States (15 percent), European Union (10 percent) and India (7 percent) – are set to take carbon emissions to a record high in 2018, with a projected rise of 2.7 percent over 2017. The projections for India suggest a 6.3 percent emissions increase in 2018, more than four percentage points above the 2 percent in 2017.

India’s emissions of carbon dioxide (CO2) grew 6 percent a year over 16 years to 2016, faster than China’s 3.2 percent and the world’s average 1.3 percent. India now emits as much CO2 as all of Africa and South America combined, The Economist said in its 6 December, 2018 issue.

At the same time, in 2017, there were 2,726 deaths in India that were directly related to extreme weather-related events--heat waves, storms, floods and droughts. India suffered an economic loss of $13.8 billion as a result, said the Global Climate Risk Index 2019 released on December 4, 2018. India has been ranked the 14th most vulnerable nation on a list, which is topped by Puerto Rico, which was ravaged by Hurricane Maria in 2017.

The fight against climate change makes economic sense for developing countries such as India, the index showed – India could save up to $8.4 trillion dollars, about three times its GDP, if it pursues actions to limit global temperature rise to 1.5 degrees Celsius target rather than the 2 degreed Celsius target, the WHO report said.

India had pledged under the Paris Agreement to achieve 40 percent of installed electricity capacity from non-fossil fuel sources and reduce the emissions intensity of its GDP by 33-35 percent (from 2005 level) by 2030, among other actions. Both these goals have been nearly attained, IEEFA said.

India has made significant progress towards its intended nationally-determined contributions, to the extent that it is expected to meet the targets a decade ahead of time.

Two of the country's three major climate targets – increased share of renewable energy and reduced emission intensity of its GDP – will be reached 10 years before the 2030 deadline, as per projections by the Institute for Energy Economics and Financial Analysis (IEEFA), US-based think-tank, released on 3 December, 2018.

The third major goal – to create an additional 2.5-3 billion tonnes of carbon sinks [reservoirs that accumulate and store carbon dioxide] through the planting of additional forest and tree cover – has remained far off.

India’s forest area rose by 1 percent over the two years to 2017. And, even this figure is likely exaggerated and includes degraded forests and plantations, FactChecker reported on 4 July, 2018.

India must double down on this unmet goal, but that may not be enough.

Climate Action Tracker, an independent scientific group, has said India’s current goals are not ambitious enough and not compatible with limiting global warming to 1.5 degrees Celsius.

The author is a principal correspondent with Indiaspend.