Black holes are extreme environments and are a testing ground for the laws of physics and our understanding of how the Universe works.

New data from the NASA/ESA Hubble Space Telescope has provided the strongest evidence yet for mid-sized black holes in the Universe.

Hubble confirms that this "intermediate-mass" black hole dwells inside a dense star cluster.

Intermediate-mass black holes (IMBHs) are a long-sought 'missing link' in black hole evolution. There have been a few other IMBH candidates found to date.

They are smaller than the supermassive black holes that lie at the cores of large galaxies but larger than stellar-mass black holes formed by the collapse of massive stars. This new black hole is over 50 000 times the mass of our Sun. This illustration depicts a cosmic homicide in action. A wayward star is being shredded by the intense gravitational pull of a black hole that contains tens of thousands of solar masses. Image credit: NASA, ESA and D. Player

IMBHs are hard to find.

"Intermediate-mass black holes are very elusive objects, and so it is critical to carefully consider and rule out alternative explanations for each candidate. That is what Hubble has allowed us to do for our candidate," said Dacheng Lin of the University of New Hampshire, principal investigator of the stud1.

In 2006 these high-energy satellites detected a powerful flare of X-rays, but it was not clear if they originated from inside or outside of our galaxy. Researchers attributed it to a star being torn apart after coming too close to a gravitationally powerful compact object, like a black hole.

Surprisingly, the X-ray source, named 3XMM J215022.4-055108, was not located in the centre of a galaxy, where massive black holes normally reside.

This raised hopes that an IMBH was the culprit, but first another possible source of the X-ray flare had to be ruled out: a neutron star in our own Milky Way galaxy, cooling off after being heated to a very high temperature. Neutron stars are the extremely dense remnants of an exploded star.

Hubble was pointed at the X-ray source to resolve its precise location. Deep, high-resolution imaging confirmed that the X-rays emanated not from an isolated source in our galaxy, but instead in a distant, dense star cluster on the outskirts of another galaxy -- just the sort of place astronomers expected to find an IMBH.

Previous Hubble research has shown that the more massive the galaxy, the more massive its black hole. Therefore, this new result suggests that the star cluster that is home to 3XMM J215022.4-055108 may be the stripped-down core of a lower-mass dwarf galaxy that has been gravitationally and tidally disrupted by its close interactions with its current larger galaxy host.

IMBHs have been particularly difficult to find because they are smaller and less active than supermassive black holes; they do not have readily available sources of fuel, nor do they have a gravitational pull that is strong enough for them to be constantly drawing in stars and other cosmic material and producing the tell-tale X-ray glow.

Astronomers, therefore, have to catch an IMBH red-handed in the relatively rare act of gobbling up a star. Lin and his colleagues combed through the XMM-Newton data archive, searching hundreds of thousands of sources to find this one IMBH candidate. Once found, the X-ray glow from the shredded star allowed astronomers to estimate the black hole's mass. 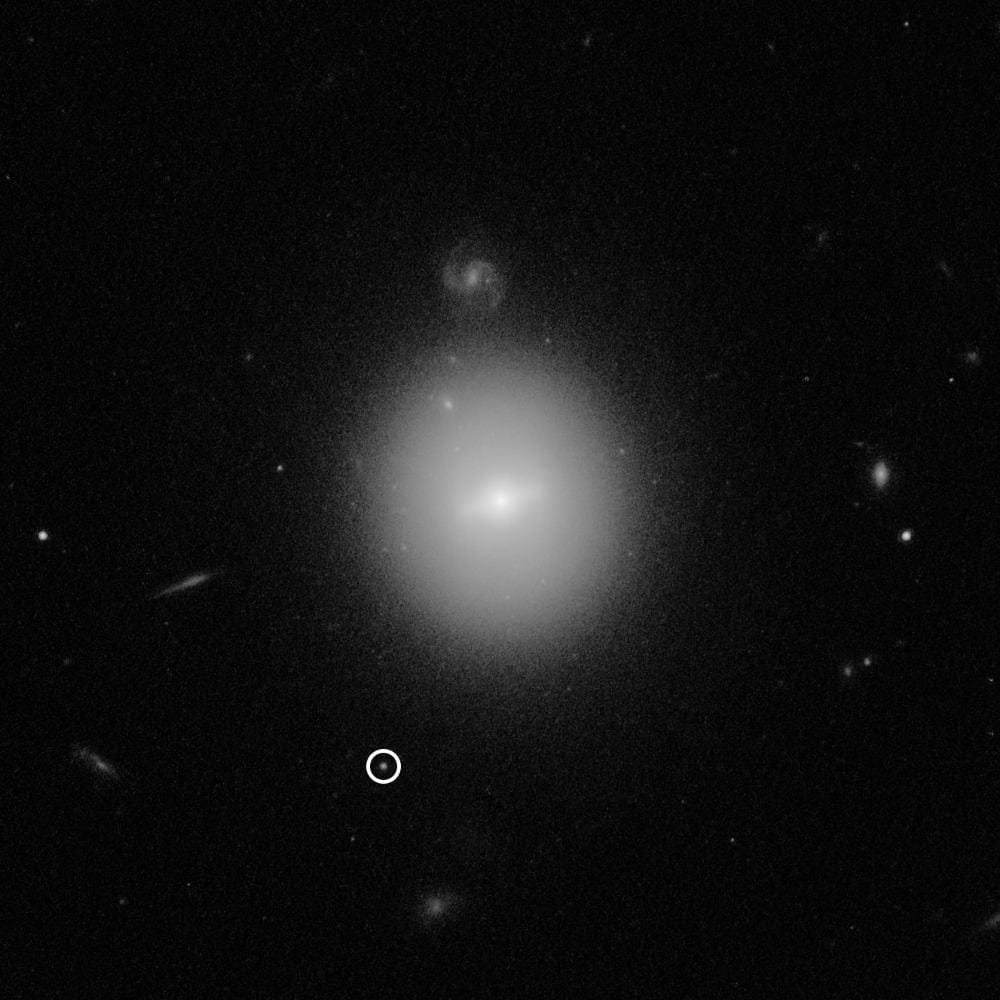 Confirming one IMBH opens the door to the possibility that many more lurk undetected in the dark, waiting to be given away by a star passing too close. Lin plans to continue this meticulous detective work, using the methods his team has proved successful.

"Studying the origin and evolution of the intermediate-mass black holes will finally give an answer as to how the supermassive black holes that we find in the centres of massive galaxies came to exist," added Webb.

Black holes are one of the most extreme environments humans are aware of, and so they are a testing ground for the laws of physics and our understanding of how the Universe works.

Does a supermassive black hole grow from an IMBH? How do IMBHs themselves form? Are dense star clusters their favoured home? With a confident conclusion to one mystery, Lin and other black hole astronomers find they have many more exciting questions to pursue.