Researchers found unprecedented levels of complexity and rapid changes in jets and gas bubbles emanating from both these nebulas.

NASA’s Hubble Space Telescope has recently captured two new images of planetary nebulae – a type of cosmic explosion of expanding, glowing ionized gas being thrown out of red giant stars towards the end of their lives. The pair of nebulas caught in action by Hubble – called NGC 6302 and NGC 7027 – showed unprecedented levels of complexity and very rapid changes in the jets and gas bubbles blasting off of the stars at centers.

Researchers, particularly astrophysicists, are interested in studying this pair since they are among the "dustiest" planetary nebulae known – with an unusually large mass of gas. With data and imagery from the Hubble telescope, researchers are able to study the mechanisms underlying the chaos.

Although stars are powerful nuclear fusion engines, they remain calm for most of their lives. However, as they near the end of their lives, stars can become "crazy whirligigs" – throwing out shells and jets of hot gas, according to a NASA release on the finding.

In a recently published study, researchers report finding unprecedented levels of complexity and rapid changes in jets and gas bubbles emanating from the star-studded centers of both these nebulas.

"As I was downloading the resulting images, I felt like a kid in a candy store," Joel Kastner from the Rochester Institute of Technology, who led the study, told NASA. "These new multi-wavelength Hubble observations provide the most comprehensive view to date of both of these spectacular nebulas."

Hubble's images reveal how both nebulae are splitting themselves apart on extremely short timescales, Phys reported. The data from the telescope is helping scientists trace back the histories of shock waves in the NGC 6302 and NGC 7027 nebulae.

These shock waves are generated when fresh and fast stellar winds hit and sweep up slowly-expanding gas and dust thrown out by the star.

"The nebula NGC 7027 shows emission at an incredibly large number of different wavelengths, each of which highlights not only a specific chemical element in the nebula, but also the significant, ongoing changes in its structure," Kastner said. 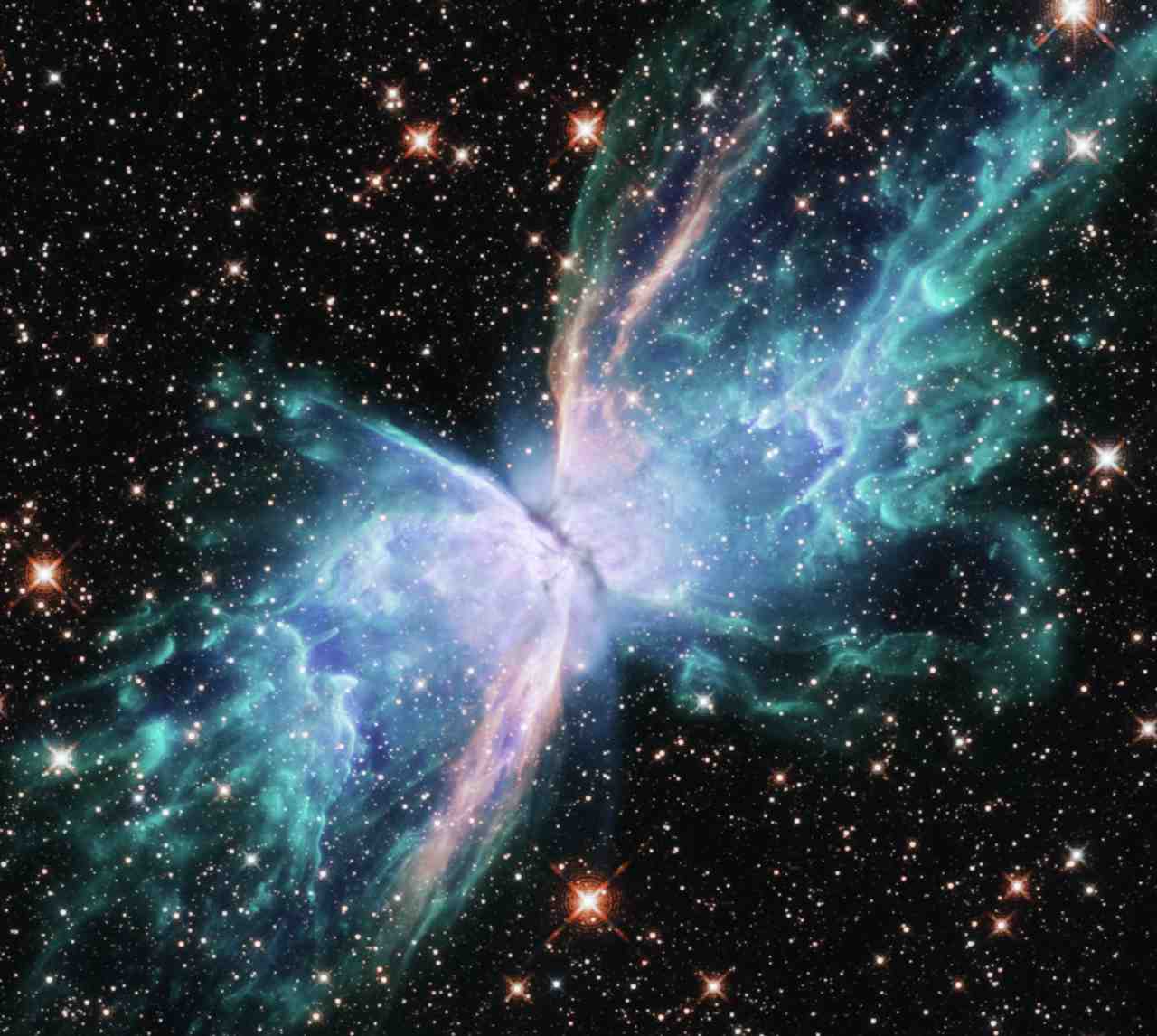 Hubble was recently retrained on NGC 6302, the Butterfly Nebula, so researchers could observe it across a more complete spectrum from near-UV to near-IR. This also opens up prospects to help researchers better understand the mechanics at work in its technicolor 'wings' of gas. Image: NASA

NGC 6302, also known as Butterfly Nebula, is like a lawn sprinkler spinning wildly and tossing out two S-shaped streams. The S pattern in this nebula is because of gas blown out at high speed by a star.

NGC 7027, on the other hand, which is also referred to as the Jewel Bug Nebula, is said to have been slowly puffing away its mass in quiet, spherically symmetric (or perhaps spiral) patterns for centuries now. Kastner said that in some respects, the changes observed in this nebula are even more dramatic than those within the Butterfly – which, let's admit, is just a jaw-drop gorgeous star in its own right.