After Cyclone Gaja wreaked havoc in Tamil Nadu, a community radio station in Nagapattinam district started an initiative called “Voice of the Vulnerable”.

“What preparations should one make for children before a cyclone strikes?” asked Durga, a volunteer at a community radio station in the coastal village of Vizhuthamavadi, roughly 320 kilometres (km) to the south of Chennai in Tamil Nadu. Ranjitha, a resident of a nearby village and the radio jockey at Kalanjiam Samuga Vanoli, crafted credible answers from the government’s disaster management booklet.

The roughly 20-minute conversation was recorded on smartphones in the 110-square-foot room, made soundproof by shutting the door and window. The broadcast will cover a radius of approximately 20 km, reaching seven to eight villages of the disaster-prone Nagapattinam district on the east coast of Tamil Nadu. 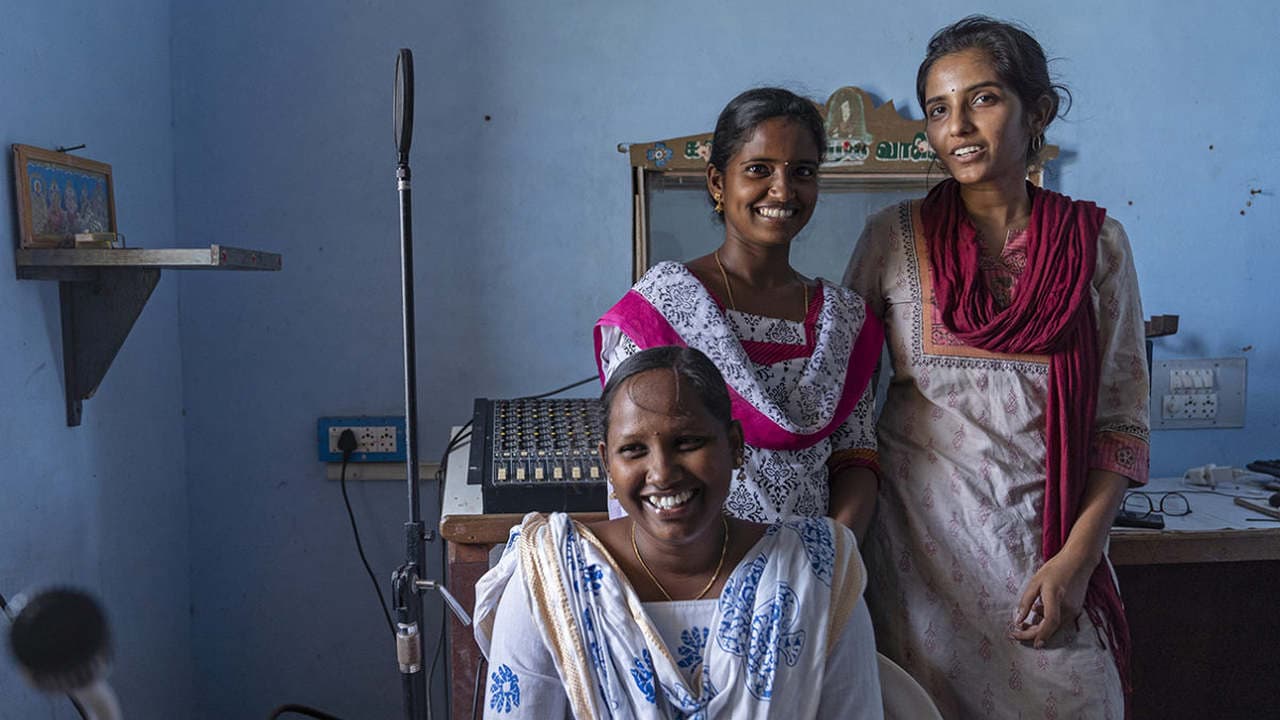 Kalanjiam Samuga Vanoli was the state’s first community radio station established in 2008 by a Madurai-based non-profit, DHAN Foundation, as a means to rehabilitate communities after the 2004 Indian Ocean tsunami. It continues to help in disaster preparedness and recovery in the region as India’s vulnerability to extreme weather events is on the rise, due to climate change.

Aparna Shukla, the station director, observed, “People don’t necessarily understand climate change and the increase in the frequency of extreme events. Climate change is in our face, especially if you are in such an area. The impact on livelihood is direct, and the suffering is higher. Many are poor and so, highly vulnerable.”

While recovering from the havoc wreaked by Cyclone Gaja in November 2018, Shukla with the help of her associates at DHAN Foundation, formulated an idea to bring climate change into perspective for the rural communities. 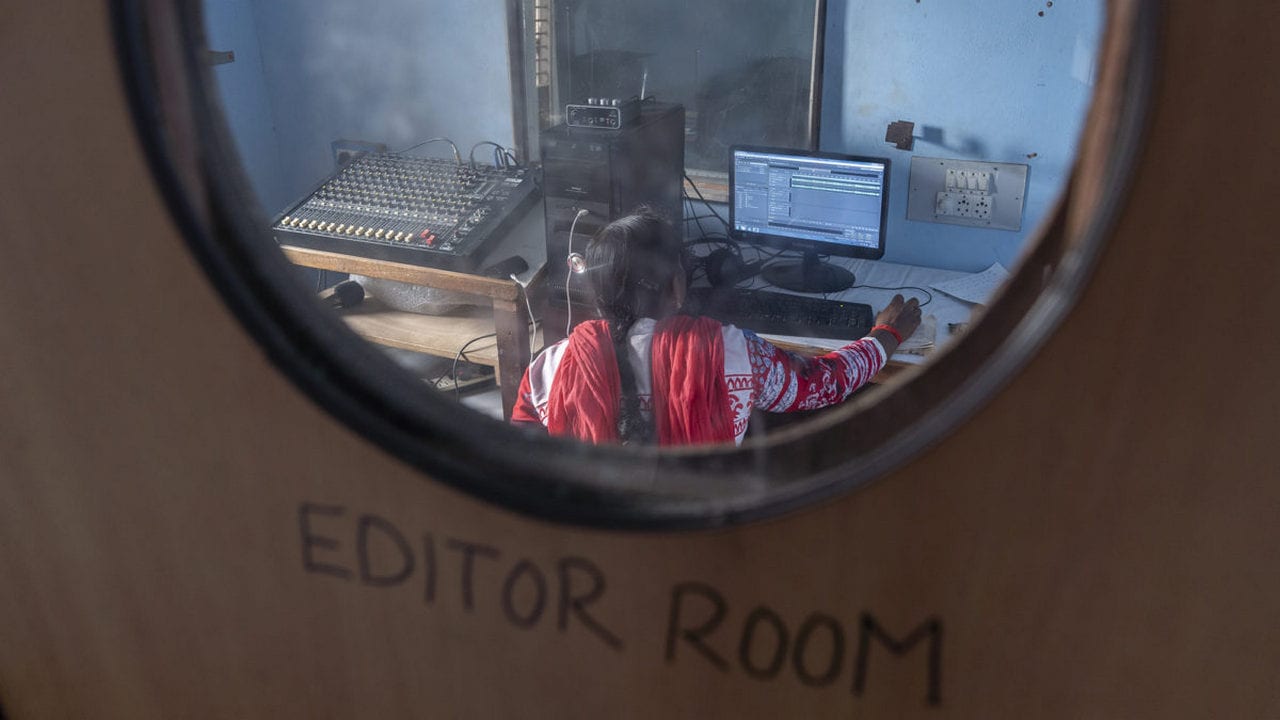 “Voice of the Vulnerable is a group of rural reporters covering issues of climate change and environment, which are usually not reported or spoken about in the community. We are trying to package it and make the voice louder,” explained 26-year-old Shukla, sitting on the porch of the station located in the middle of paddy fields.

The radio station has organised three batches of Voice of the Vulnerable: Community Journalism Workshops since February 2019. Shukla and Ranjitha conducted sessions along with disaster management officials and other experts. The workshop attracted numerous participants from Vizhunthamavadi and neighbouring villages, a majority of whom were young women.

“We teach them about climate change and global warming, why the village is disaster-prone, why the rise in extreme events, etc. We discuss environment-related problems from these rural places. But what about the solutions? How is the community dealing with it? We encourage those stories as well,” said Shukla.

The former journalist from Mumbai felt that environmental disasters happening in rural parts of the country get “tucked inside the newspaper” and lack thorough and long-term coverage. Her desire to learn and work in the rural development sector won her a position at the community radio station, through the SBI Youth for India fellowship programme. The station now has around 25 active community journalists, most of whom are between 15 to 25 years of age. “We ask volunteers to report on what they care for,” said Shukla.

For instance, 24-year-old Kaviarasu, with an inclination towards agricultural and solution-based stories, interviewed an organic farmer about his practices. 20-year-old Kanaimuzhi reported on excessive groundwater extraction using borewells in her locality. One focused on the issues of rising salinity in the soil and water damaging crops post-disasters, while another spoke to a farmer who grew timber-intensive trees to insure himself in the time of need.

A verse by volunteers on the workshop’s banner in the station’s veranda sets a backdrop to the vulnerability of the communities:

We took our boats into the ceaseless waves.
Without any rest, to catch fish.
Our body was fatigued, but we were joyful.
We returned to the shore to meet our kin.
But there were neither people nor huts.
Where did you take them?

Broadcasting before and after Cyclone Gaja

“The week before Cyclone Gaja struck, we kept getting weather information and warnings from the district post office through WhatsApp. We cancelled all other shows and pushed alerts continuously,” recollected 25-year-old Ranjitha. 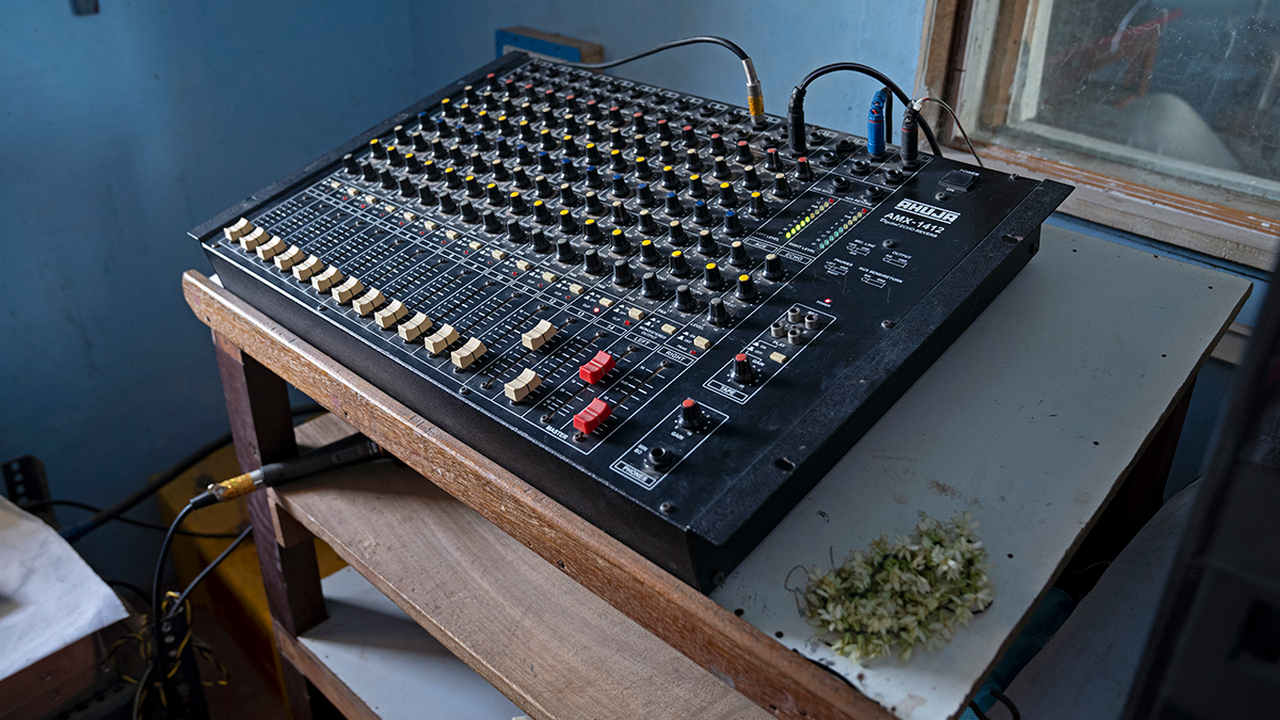 “The fishermen were one of our main concerns. Some of them heard the warnings through radio or other sources and didn’t go into the sea. Those who were already heading out to sea and carried a radio with them, heard the warnings and returned to the shore.”

Shukla added, “We kept asking people to take backups of all government documents as they are all needed to file claims. We had broadcast other small aspects such as where they can keep their luggage, where to keep the cattle, where to keep gold, etc.”

Gaja made landfall on 16th November 2018 and caused loss of lives and property in several districts in Tamil Nadu. Farming and fishing communities, which form the majority in coastal areas such as Vizhunthamavadi, incurred substantial losses from damaged fields, boats, and equipment.

Three kilometers away from Vizhunthamavadi’s coast — which, to this day, has a vast spread of fallen trees — the community radio station experienced structural and equipment damage. The radio tower that stands in front of the station, though slightly bent, withstood wind speeds as high as 120 kilometers per hour. 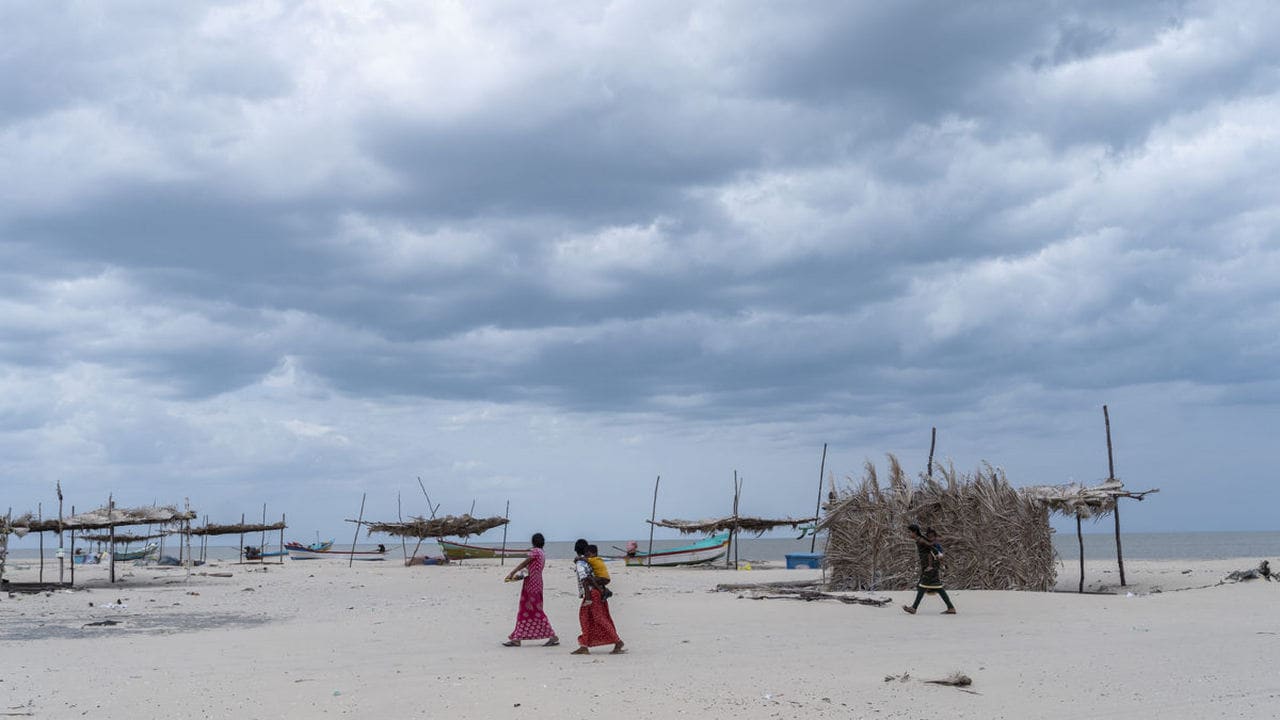 “There was no electricity for many weeks. We arranged for a generator, fixed the tower, and ran shows for an hour daily. Many volunteers were affected but still contributed updates from the ground,” said Shukla, obviously overcome with the team’s effort. “We transmitted information about claim processes, we got a doctor and spoke about water contamination, skin diseases, healthcare for women and home remedies, as many were falling sick.”

Shukla was at the coast interviewing fishermen for a show when it started raining heavily. In a matter of a few hours, before the cyclone made landfall, she found herself with other community members inside a tsunami shelter. She survived the overnight ordeal and her experiences moved her to create the community journalism workshops.

Vinod Pavarala, community radio expert and UNESCO Chair on Community Media at the University of Hyderabad, said, “Community radio has a basic philosophy of empowering marginalised people. So, it is attuned to disaster management for the vulnerable section of society. If you look at disasters in the last 20 years in south and southeast Asia, community radio has achieved a great deal – mobilised people before disasters, spread awareness and precautions, provided information on missing people, explained causes, provided psychological support – it has amazing possibility to build climate resilience.”

Pointing to each device in the recording room, Ranjitha said, “We have a basic setup to do live or recorded shows: transmitter, audio mixer, some mics, and a filter. Usually, we go to the field and use our phones for interviews. We can’t expect people to come here. Also, some natural coastal sounds are good too!”

The initiative plans to amplify the voices of the vulnerable through the print medium. “We will distribute a newsletter called Coastal Watch with these stories amongst the community, village authorities, and district officials,” said Shukla 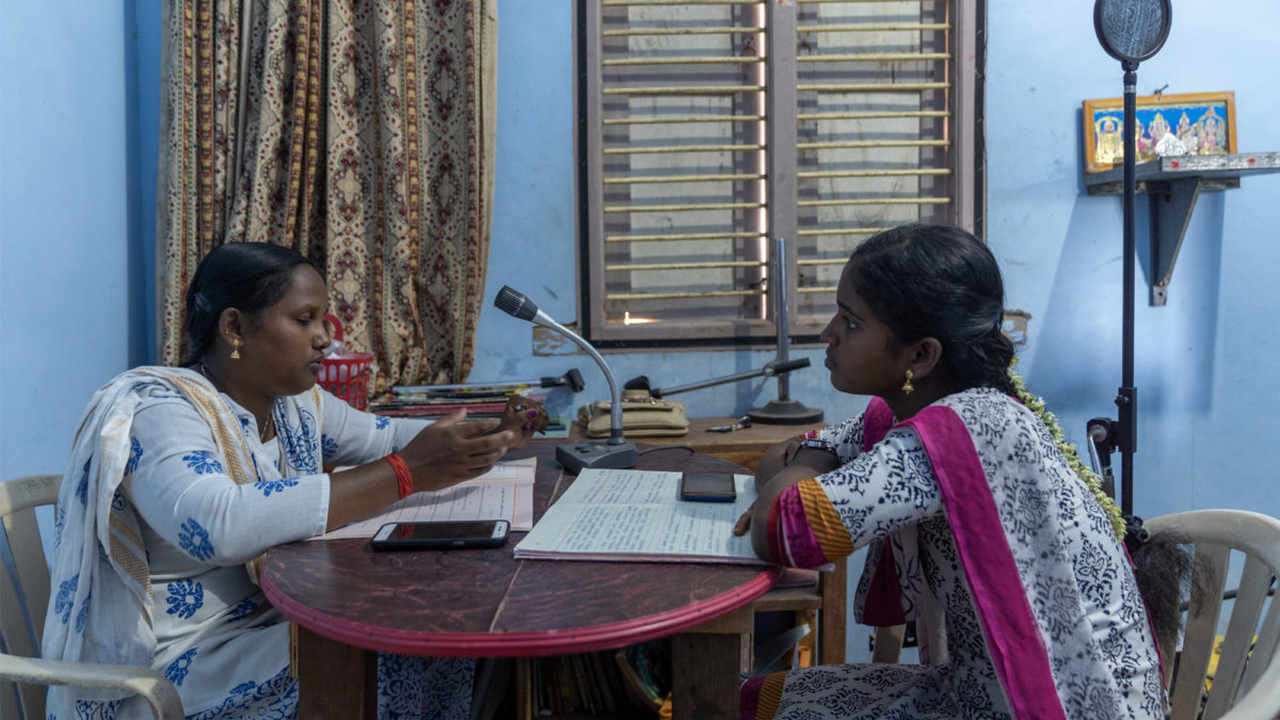 But funding and sustainability are still some of the issues for the radio station.

Naguveer Prakash from DHAN Foundation, who ran the station for a decade till 2018, expressed his concern. “You might think the use of radio is getting reduced, but in a disaster situation, you cannot ignore its reach, reliability and local appeal. Ensuring sustainability and technology upgrade is a challenge due to resource crunch,” he said

Ranjitha and Shukla, who have been each other’s support system while producing daily radio shows, couldn’t agree more. The duo is also anxious about regular contributions from volunteers, in the long run, to keep the radio’s pulse beating. Voice of the Vulnerable workshops trains young community journalists from Vizhunthamavadi and nearby villages to document stories about the impact of climate change and the environment in the community’s daily lives. image credit: Kalanjiam Samuga Vanoli.

The next workshop is expected to attract new faces and a higher number of women. “If the community is not listening to all our shows, at least the volunteers take away something new and start a dialogue in their homes and neighbourhood,” said Shukla, whose fellowship and role at the station ended in August 2019.

After Durga left for work, Ranjitha and Shukla continued their day planning: a way to get environment and climate change discussions into the everyday lives of the people. “Let’s do a series on salt – salt and agriculture, salt and health, salt and water.”