Milky Way is a disc-shaped sea of stars in which the youngest and brightest stars cluster in the spiral arms.

The study was published in the journal — The Astrophysical Journal Letters.

The researchers proceeded by analysing the properties of the galactic magnetic field. After the process, the team found out that dilute warm ionised medium (WIM) condenses near a spiral arm of the Milky Way. During its cooling period, it serves as the supply of a colder material of dust and gas that further feeds the formation of a star. Illustration of selected lines of sight within the Milky Way, which roughly covers the area under investigation. The star indicates the location of the Earth. The green arc indicates the presumed location of the condensed Warm Interstellar Medium (WIM). The white line of sight that runs through this area along the longest distance corresponds to the position with the strongest effect of the Faraday rotation. The orange line of sight passes through the WIM on shorter distances and thus observes a weaker effect. The smallest contributions stem from the lines of sight outside (green) and inside the spiral arm (yellow). Image credit: MPIA

Milky Way is a disc-shaped sea of stars in which the youngest and brightest stars cluster in the spiral arms. These stars form from the dense interstellar medium (ISM) which consists of dust and gas. It is necessary that such material is flushed into the spiral arms constantly for the formation of new stars and to replenish the supply of dust and gas.

The researchers after their study were able to show that the supply comes from a hotter component of the ISM which is generally known to envelop the Milky Way Galaxy.

The WIM has an average temperature of 10,000 degrees and high energy radiation from the hot stars leads to ionisation of hydrogen gas from WIM.

The research of the astronomers suggests that WIM condenses near a spinal arm in a narrow area and starts flowing into it while cooling.

Scientists measured Faraday rotation for discovering the dense WIM which involves changing the orientation of linearly polarised radio emissions while they pass through plasma which is traversed by a magnetic field. 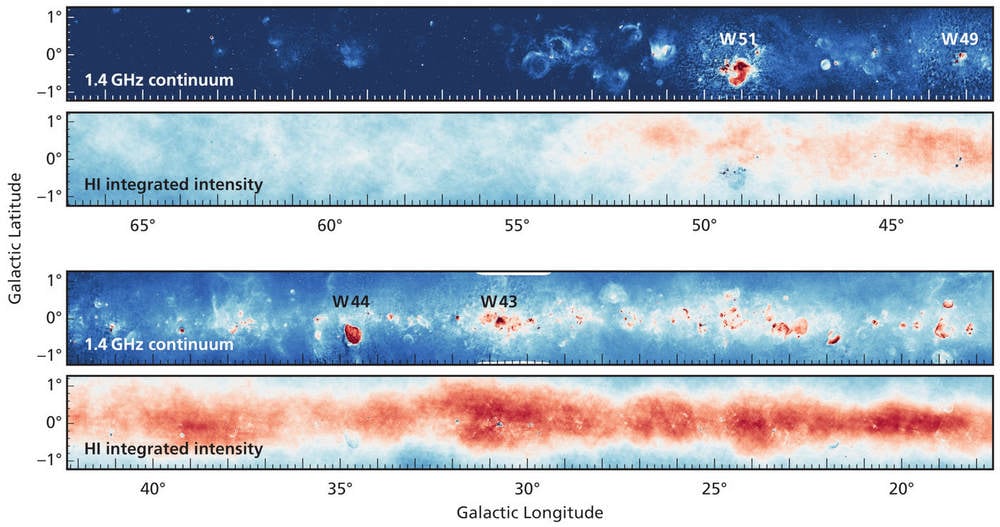 False-colour representation of the radio emission in the Milky Way from the THOR survey at a wavelength of about 21 cm. The upper band (1.4 GHz continuum) shows the emission from different sources, while the lower bands show the distribution of atomic hydrogen. Image credit: Y. Wang/MPIA

In this study, astronomers were able to detect a strong signal in an inconspicuous area of the galaxy which faces the galactic centre and is located on the side of the Sagittarius arm of the Milky Way.

The spiral arm stands out in the imaging data because of the very strong radio emission that is generated by embedded hot stars and supernova remnants. However, the astronomers found the strongest shift in polarisation outside this prominent zone.

Scientists concluded that the increased Faraday rotation does not originate within the active part of the spiral arm and instead originates from condensed WIM, which, belongs to a less obvious component of the spiral arm, just like the magnetic field.

The analysis conducted by scientists is based on the THOR survey (The HI/OH Recombination Line Survey of the Milky Way) in which a large area of the Milky Way is observed at several radio wavelengths. Polarised radio sources such as distant quasars or neutron stars serve as 'probes' for the determination of the Faraday rotation.

This allowed astronomers to not just detect the otherwise difficult to measure magnetic fields in the galaxy, but also to study the structure and properties of the hot gas.

"We were very surprised by the strong signal in a rather quiet area of the Milky Way. These results show us that there is still a lot to be discovered in studying the structure and dynamics of the Milky Way," said the lead astronomer of the study, Henrik Beuther.

Astronomers create 3-D map of Milky Way, show that its stars are warped and twisted

Plasma in a Bottle