Honey bees can solve math equations better than many humans can, study finds

Findings suggest brain size & smarts aren't linked, & that math may be simpler than we make it out to be!

For an insect with brains the size of a sesame seed, the honeybee is a lot smarter than we thought it was.

New research shows that these buzzing insects can solve simple math problems – proving that bigger isn't necessarily better when it comes to brains.

Scientists used colour-coded shapes to train fourteen honeybees in working out basic arithmetic problems, as shown in the video below. Later, when given a new math problem and two possible solutions to it, the trained bees often picked the right answer — between 63.6 and 72.1 percent of the time!

That's a lot higher than what we'd expect from random chance or sheer luck.

The math problems given to them weren't loaded with numbers and symbols like the kind we're familiar with. 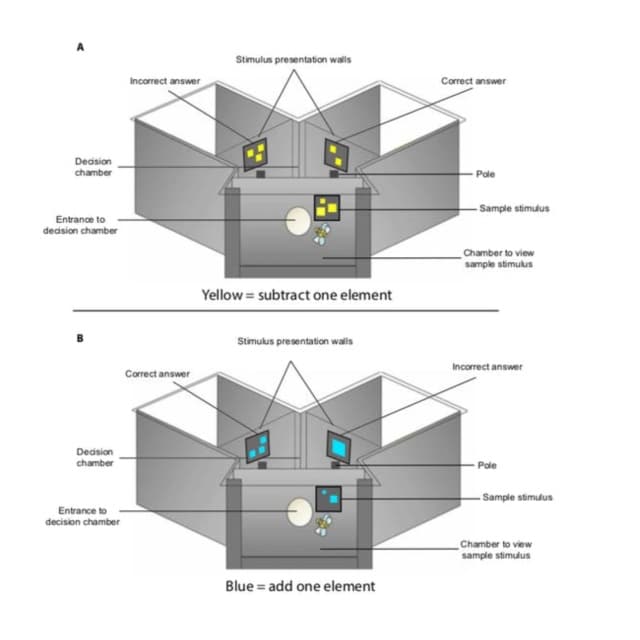 To put the bees' arithmetic prowess to a test, they were placed in a chamber and presented with either blue or yellow shapes to interact with. This chamber led to two separate chambers, one with a correct answer and the other with an incorrect answer. The bees were left to decide where to go. Assuming that bees head towards the chamber they perceive as the right answer, this was taken as an indicator (with a margin of error) that bees are capable of understanding and applying basic arithmetic skills.

For the researchers, the study brings in to question whether brain size and intelligence are connected at all, and whether mathematics is really as tough as we make it out to be.

"The bees not only succeeded in performing these processing tasks but also had to perform the arithmetic operations in working memory," the authors, led by Scarlett Howard at the French National Center for Scientific Research, say in their research paper.

(Howard also authored a 2018 study that strongly suggested that bees grasp the concept of zero in mathematics!) These results are exciting to the researchers because combining basic arithmetic and learning with symbols is a complex cognitive process. It requires a bee to use long-term memory to remember how the rules work and short-term (working) memory to process the objects and colours they're being shown.

The researchers argue based on what they found that it neither takes language nor a sound understanding of numbers for animals to learn mathematics.

The study and its findings were published this week in Science Advances.