It’s hard to care about bootprints sunk in soil 238,900 miles away as humanity suffers the combined burden of an unforgiving virus and a political unease. But how humans treat those bootprints and the historic lunar landing sites upon which they are found will speak volumes about who we humans are and who we seek to become.

On Dec. 31, the One Small Step to Protect Human Heritage in Space Act became law. As far as laws go, it’s pretty benign. It requires companies that are working with the National Aeronautics and Space Administration on lunar missions to agree to be bound by otherwise unenforceable guidelines intended to protect American landing sites on the Moon. That’s a pretty small pool of affected entities. However, it is also the first law enacted by any nation that recognizes the existence of human heritage in outer space. That’s important because it reaffirms our human commitment to protecting our history – as we do on Earth with sites like the Historic Sanctuary of Machu Picchu, which is protected through instruments like the World Heritage Convention – while also acknowledging that the human species is expanding into space. NASA’s Lunar Reconnaissance Orbiter Camera captured images of the Apollo 12, 14 and 17 landing sites. The Apollo 17 lunar rover is visible, as are the descent stages of the three spacecraft and footpaths made by the astronauts. NASA/Goddard Space Flight Center/Arizona State University

I am a lawyer who focuses on space issues that seek to ensure the peaceful and sustainable exploration and use of space. I believe that people can achieve world peace through space. To do so, we must recognize landing sites on the Moon and other celestial bodies as the universal human achievements they are, built on the research and dreams of scientists and engineers spanning centuries on this globe. I believe that the One Small Step Act, enacted in a divisive political environment, demonstrates that space and preservation truly are nonpartisan, even unifying principles.

The Moon is getting crowded, fast

While it would be nice to think that a human community on the Moon would be a collaborative, multinational utopia – albeit located in what Buzz Aldrin famously described as a “magnificent desolation” – the fact is people are once again racing one another to reach our lunar neighbour.

The US Artemis project, which includes a goal of sending the first woman to the Moon in 2024, is the most ambitious mission. Russia has reinvigorated its Luna program, setting the stage to put cosmonauts on the Moon in the 2030s. However, in a race once reserved for superpowers, there are now multiple nations and multiple private companies with a stake. 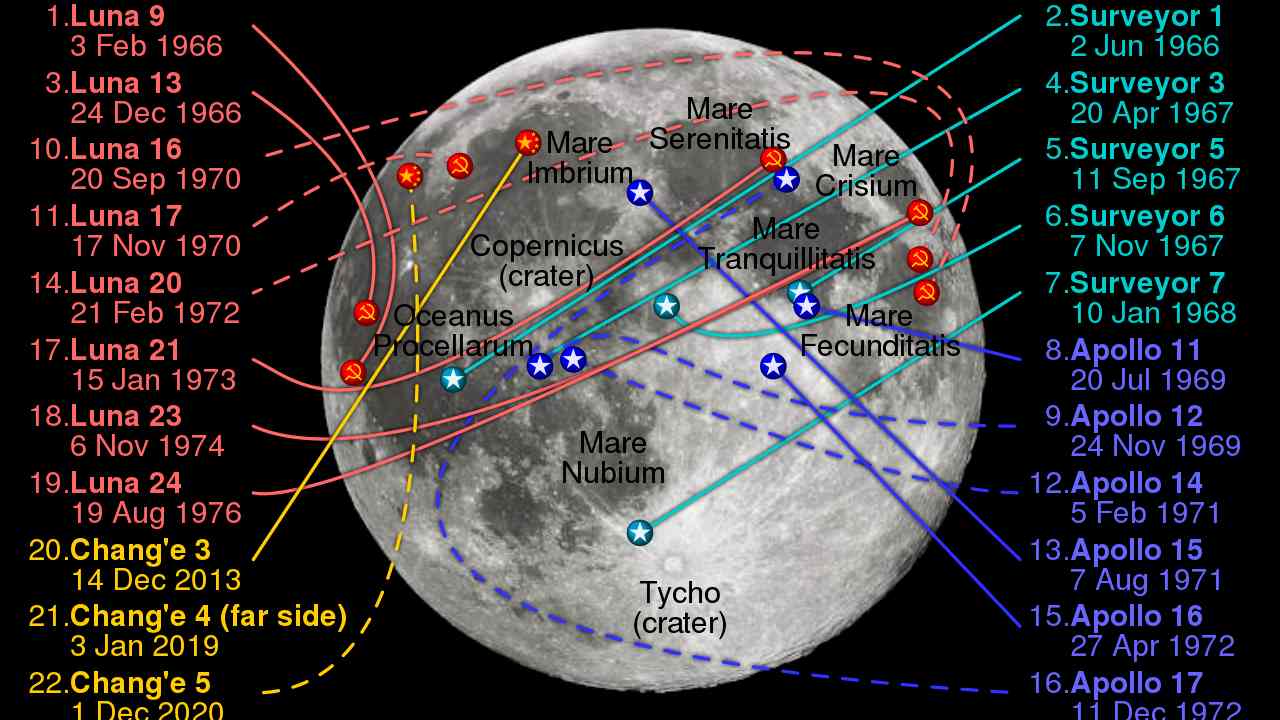 Locations of all manned and unmanned landings. Cmglee/Wikimedia, CC BY-SA

India is planning to send a rover to the Moon this year. China, which in December implemented the first successful lunar return mission since 1976, has announced multiple lunar landings in the coming years, with Chinese media reporting plans for a crewed mission to the Moon within the decade. South Korea and Japan are also building lunar landers and probes.

Such private companies as Astrobotic, Masten Space Systems and Intuitive Machines are working to support NASA missions. Other companies, such as ispace, Blue Moon and SpaceX, while also supporting NASA missions, are preparing to offer private missions, including for tourism. How are all these different entities going to work around one another?

Space is not lawless. The 1967 Outer Space Treaty, now ratified by 110 nations, including all of the current spacefaring countries, offers guiding principles supporting the concept of space as the province of all humankind. The treaty explicitly indicates that all countries and, by implication, their nationals have the freedom to explore and free access to all areas of the Moon.

That’s right. Everyone has the freedom to roam wherever they want – over Neil Armstrong’s bootprint, close to sensitive scientific experiments or right up to a mining operation. There is no concept of property on the Moon. The only restriction on this freedom is the remonstration, found in Article IX of the treaty, that all activities on the Moon must be carried out with “due regard to the corresponding interests of” all others and the requirement that you consult with others if you might cause “harmful interference.”

What does that mean? From a legal standpoint, no one knows.

It can reasonably be argued that interfering with an experiment or a lunar mining operation would be harmful, cause quantifiable damage and thus violate the treaty.

But what about a derelict spacecraft, like the Eagle, the Apollo 11 lunar lander? Do we really want to rely on “due regard” to prevent the intentional or inadvertent destruction of this inspiring piece of history? This object memorializes the work of the hundreds of thousands of individuals who worked to put a human on the Moon, the astronauts and cosmonauts who gave their lives in this quest to reach the stars, and the quiet heroes, like Katherine Johnson, who fueled the math that made it so.

The lunar landing sites – from Luna 2, the first human-made object to impact the Moon, to each of the crewed Apollo missions, to Chang-e 4, which deployed the first rover on the far side of the Moon – in particular, bear witness to humanity’s greatest technological achievement thus far. They symbolize all we have accomplished as a species and hold such promise for the future.

The One Small Step Act is true to its name. It’s a small step. It applies only to companies that are working with NASA; it pertains only to U.S. lunar landing sites; it implements outdated and untested recommendations to protect historic lunar sites implemented by NASA in 2011. However, it offers significant breakthroughs. It is the first legislation from any nation to recognize an off-Earth site as having “outstanding universal value” to humanity, language taken from the unanimously ratified World Heritage Convention.

The act also encourages the development of best practices to protect human heritage in space by evolving the concepts of due regard and harmful interference – an evolution that will also guide how nations and companies work around one another. As small a step as it may be, recognizing and protecting historic sites is the first step to developing a peaceful, sustainable and successful lunar governance model.

The bootprints are not protected – yet. There is a long way to go toward an enforceable multilateral/universal agreement to manage the protection, preservation or memorialization of all human heritage in space, but the One Small Step law should give us all hope for the future in space and here on Earth. NASA’s Lunar Reconnaissance Orbiter (LRO) captured the sharpest images ever taken from space of the Apollo 12, 14 and 17 landing sites.