The heatwave lasted around 700 days from 2014 to 2016 and effected water temperature and food webs.

So biologists were stunned four winters ago when carcasses of emaciated common murres showed up on beaches in what they say was the largest seabird die-off recorded in the world’s oceans. The die-off eventually killed an estimated 500,000 to one million murres from California to Alaska, eliminating 10-20 percent of the northeast Pacific population of the species. Seabird experts now believe they know why. 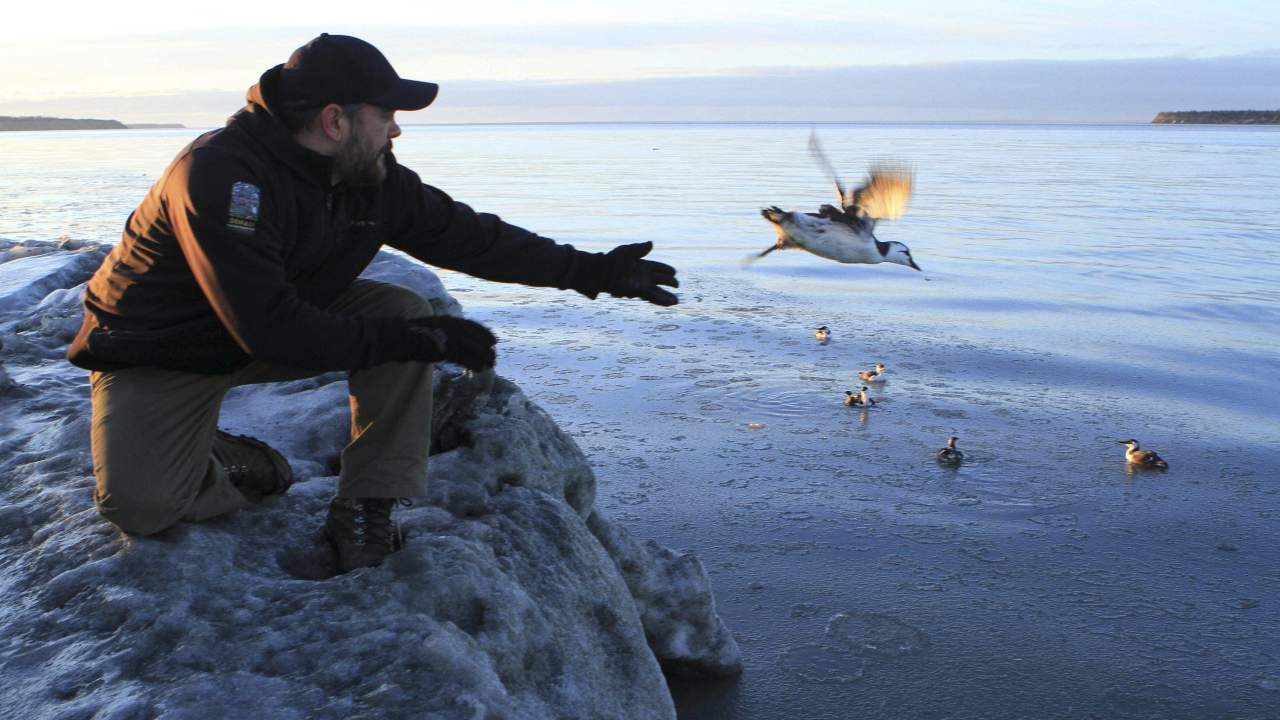 Common murres were ambushed by effects of the northeast Pacific marine heatwave dubbed “The Blob,” according to a paper published Wednesday by 23 federal, university and private researchers in the science journal PLOS ONE. The heatwave lasted more than 700 days from 2014 to 2016, increasing water temperature and interrupting patterns in the food web from the smallest creatures to top predators.

Forage fish — the main prey of murres— feed on zooplankton, the floating small animals that feed on plant plankton. Coldwater produces the biggest, fattiest varieties of zooplankton. But the marine heatwave reduced the nutritional value of zooplankton, researchers concluded, and the lower-grade food stunted the growth of forage fish.

In turn, warmer water increased the metabolism of large fish such as Pacific cod, walleye pollock and arrowtooth flounder, requiring them to eat more forage fish.

That translated into a double whammy for murres, according to the researchers. The seabirds found that their main food source had a fraction of its usual nutrition. Murres also found themselves out-competed by large fish.

“The food just wasn’t there and everybody wanted it,” said lead author John Piatt, a research biologist for the U.S. Geological Survey who has studied seabird for more than 40 years. “And it just got scarcer and scarcer.” Common murres have marvelous tools for finding forage fish but have an Achille’s heel: Murres must eat 56 percent of their body mass every day, the equivalent of 60 to 120 finger-length forage fish. If they don’t, they can starve in three to five days, Piatt said.

Murre die-offs have occurred before but never in such numbers and never across three ecosystems, Piatt said, alluding to the California Current System, the Gulf of Alaska and the Bering Sea. Biologists with help from citizen scientists counted or collected 62,000 carcasses, although Piatt says the figure represents only a fraction of the deaths because murres spend most of their time far from shore.

About two-thirds of the dead birds were adults — and that carried ramifications for reproduction. Thirteen murre colonies in the Gulf of Alaska and the Bering Sea, where thousands of murres gather to reproduce, experienced complete failures for at least one breeding season during or after the die-off.

Seabird experts early on suspected naturally occurring toxins played a role in the deaths. So far, there has been no evidence that anything other than starvation could explain the mass mortality, Piatt said.

Pulling together work done by oceanographers, fishery and avian disease experts and data collected by citizen scientists, Piatt and his collaborators focused on effects of the marine heat wave.

The Blob created water with surface temperatures that were more than two degrees Celsius above normal. The heatwave extended hundreds of kilometers off shore and hundreds of meters below the surface.

The reasons for the heatwave are unclear. Global warming has slowly raised ocean temperatures over decades. Yet the marine heatwave also is tied to the recurring Pacific climate patterns including El Nino cycles of warm sea surface temperatures and changing patterns of wind speed, direction and duration that help mix ocean waters. The murre deaths signaled that something was wrong in the ocean but starvation, die-offs, reproduction failures or population declines were recorded in other species: cod, arrowtooth flounder, rhinoceros auklets, tufted puffins, California sea lions and Guadalupe fur seals. Seventy-nine humpback and fin whales stranded during 2015-16, mostly for “unexplained” reasons and in the Gulf of Alaska. The common thread was their reliance on forage fish.

“It sort of hit me —no wonder things were so screwed up, no wonder this thing hit so hard, because the four-inch species is at the heart of all this for the murres, the rhinos, the tufteds the humpbacks,” Piatt said.

Fisheries professor Selina Heppell, the chair of the Department of Fisheries and Wildlife at Oregon State University, said it’s long been known or suspected that there were big impacts from the marine heatwave.

“What this group has been able to do is actually pull several lines of evidence together into a cohesive story,” said Heppell, who was not part of the study.

However, she said the study underscores the need for additional research on forage fish even though many do not have commercial value. “That’s what you really have to get to do to answer these ecosystem-change kinds of questions.”

Dust storm and thunderstorm in Delhi today, maximum temperature to be 41 degrees Celsius

Delhi burns at 49 degrees Celsius; people advised not to venture out unless necessary

Garma garam: As Delhi swelters, a look at the hottest places in the world