She has taken a year off school to attend the climate change events in North and South America.

Greta Thunberg’s two-week voyage to the United States will be no pleasure cruise.

The 16-year-old climate change activist who has inspired student protests around the world will leave Plymouth, England, later this week bound for New York in a high-tech but decidedly low-comfort sailboat.

Highlighting the urgency of cutting carbon emissions, the young Swede last month announced that while she would not fly to environmental conferences, she’d found a way to get there without hurting the planet. Pierre Casiraghi, the grandson of Monaco’s late Prince Rainier III and American actress Grace Kelly, and fellow yachtsman Boris Herrmann offered her passage on a racing yacht as she travels to U.N. climate summits next month in New York and in Santiago, Chile, in December.

Sailing on the 18-meter Malizia II, outfitted with solar panels and underwater turbines to generate electricity, Thunberg will make a zero-carbon trans-Atlantic journey.

But to call it a no-frills passage would be an understatement. The sailboat is built for high-speed, offshore racing, with weight kept to a minimum. The only alterations for the voyage are fitting curtains in front of the bunk and adding mattresses for comfort. There is no toilet or fixed shower. There’s a small gas cooker and the food will be freeze-dried.

Inside, the yacht resembles the interior of a tin can. It is dark and grey, with no windows below deck.

Herrmann, who is skippering the boat, will take turns with Casiraghi steering the craft. He described life on board as a mixture of camping and sailing, with a thin mattress and sleeping bag the only comforts. “It’s a very simple life and then the rest of the day depends on the wind,” Herrmann told the AP. “It can be calm and smooth and going along and you can read a book, or it can be really rough and you hold on and try to fight seasickness and can be really hard.”

Casiraghi and Herrmann’s Team Malizia was founded to sail the biggest ocean races — the Vendee Globe 2020 and The Ocean Race 2021. They also developed the Malizia Ocean challenge, a science and education project aimed at teaching children about climate change and the ocean. Their vessel has an onboard sensor that measures CO2 levels in seawater, a measure of how atmospheric carbon is changing the oceans.

Thunberg became a global celebrity last year when she refused to go to school in the weeks before Sweden’s general election to highlight the impact of climate change and to put pressure on politicians to do something about it. She continued her school strike on Fridays after the election, spurring thousands of young people around the world to follow suit. Since then, she’s met the pope, spoken at Davos and attended anti-coal protests in Germany. The interior of the yacht. Image credit: Twitter/Greta Thunberg

She is now taking a year off school to attend the events in North and South America and meet with some of the people most affected by climate change. She decided not to fly to New York because of the emissions caused by air travel and plans to use the least carbon-intensive methods of travel available as she continues her trip.

“By this journey I hope to increase awareness among people, to spread information and communicate the science about what is really going on so people can understand what is really going on with the climate and ecological crisis,” she said. “That is what I am hoping to achieve with everything and that will also lead to international opinions so that people come together and put pressure on the people in power so that they will have to do something.”

Rising levels of greenhouse gases, primarily carbon dioxide, are already increasing global temperatures, according to the UN. This will lead to shifting weather patterns that threaten food production and rising sea levels, though scientists hope that by curbing emissions catastrophic consequences can be avoided.

Thunberg will be accompanied on her trans-Atlantic voyage by her father, Svante, and filmmaker Nathan Grossman of B-Reel Films, who will document the journey. She’s brought audiobooks and has notebooks to fill. 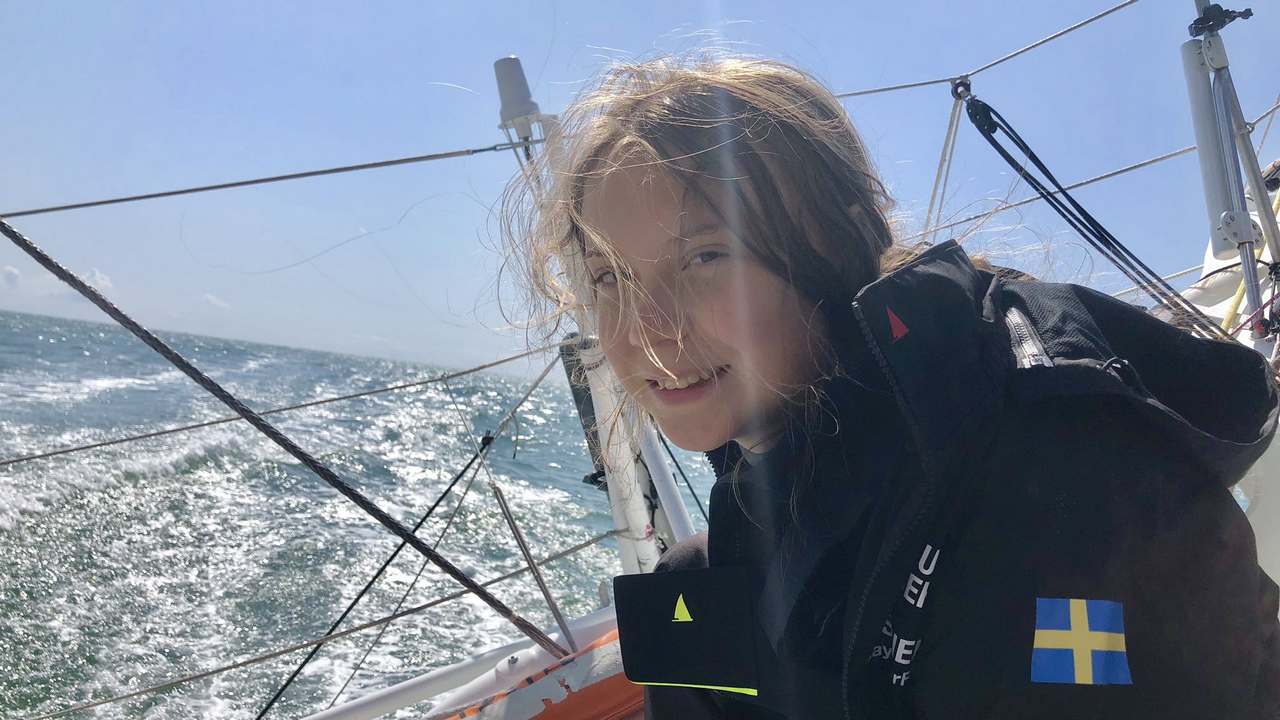 Greta during the test sail of the boat. Image credit: Twiiter/Greta Thunberg

Beyond that, everything depends on the wind.

The Atlantic Ocean in hurricane season can be a rocky place. Herrmann plans a southern route since three of the five sailors on board have no experience. During a trial run in the Bay of Plymouth on Monday, Thunberg said she was seasick for “five minutes” when the boat stood still.

“Of course, I will be a little bit seasick,” she said. “But I don’t think I will be very seasick.”