Greta Thunberg sails to prove how 'impossible' it is living sustainably, highlight the need to make it easier

The yacht leaves little or no carbon footprint when its sails are up, using solar panels and hydro-generators for electricity.

Climate activist Greta Thunberg told cheering supporters Tuesday that her three-week journey across the Atlantic had “energized” her for the fight against climate change as she arrived in Portugal.

The Swedish teen, whose one-woman protests outside the Swedish parliament helped inspire a global youth movement, sailed into the port of Lisbon after making a last-minute dash back from the United States to attend this year’s UN climate conference.

The 16-year-old has been steadfast in her refusal to fly because of the amount of greenhouse gases emitted by planes, a stance that put her planned appearance at the meeting in doubt when the venue was moved from Chile to Spain a month ago. “We’ve all been on quite an adventure,” Thunberg told reporters shortly after stepping off the catamaran La Vagabonde, on which she’d hitched a ride back home to Europe. “It feels good to be back.”

Thunberg’s appearances at past climate meetings have won her plaudits from some leaders — and criticism from others who’ve taken offense at the angry tone of her speeches.

“I think people are underestimating the force of angry kids,” said Thunberg, who has berated heads of government for failing to do enough to cut back the greenhouse gas emissions that fuel global warming. “If they want us to stop being angry, then maybe they should stop making us angry,” she said.

Being invited to express her criticism in front of political leaders can also feel awkward, said Thunberg.

“I feel strange when I get applauded by people in power ... because it’s obvious that it’s them I’m criticizing, but they can’t show that in front of the cameras,” she said. “It’s quite funny sometimes.”

The white 15-meter yacht carrying Thunberg, her father Svante, an Australian family and professional sailor Nikki Henderson arrived in Lisbon amid blue skies, with a small flotilla of boats escorting it to harbor.

Her trip contrasted with the many air miles flown by many of the U.N. meetings more than 25,000 registered attendees.

Thunberg wanted a low-carbon form of transport to get to the climate meeting, which was switched at short notice from Chile due to unrest there.

The yacht leaves little or no carbon footprint when its sails are up, using solar panels and hydro-generators for electricity.

“I am not travelling like this because I want everyone to do so,” said Thunberg. “I’m doing this to sort of send the message that it is impossible to live sustainable today, and that needs to change. It needs to become much easier.”

Looking ahead to next year’s presidential election in the United States, Thunberg said: “I just hope that someone wins that can think on the long term, not just the short term.”

Thunberg said she planned to spend several days in the Portuguese capital before heading to Madrid, where delegates from nearly 200 countries are discussing how to tackle global warming.

“She has been a leader that has been able to move and open hearts for many young people and many people all over the world,” Schmidt told The Associated Press at the summit in Madrid.

“We need that tremendous force in order to increase climate action,” said Schmidt, who is chairing the two-week talks.

Near to the conference, some 20 activists cut off traffic in central Madrid and staged a brief theatrical performance to protest climate change. 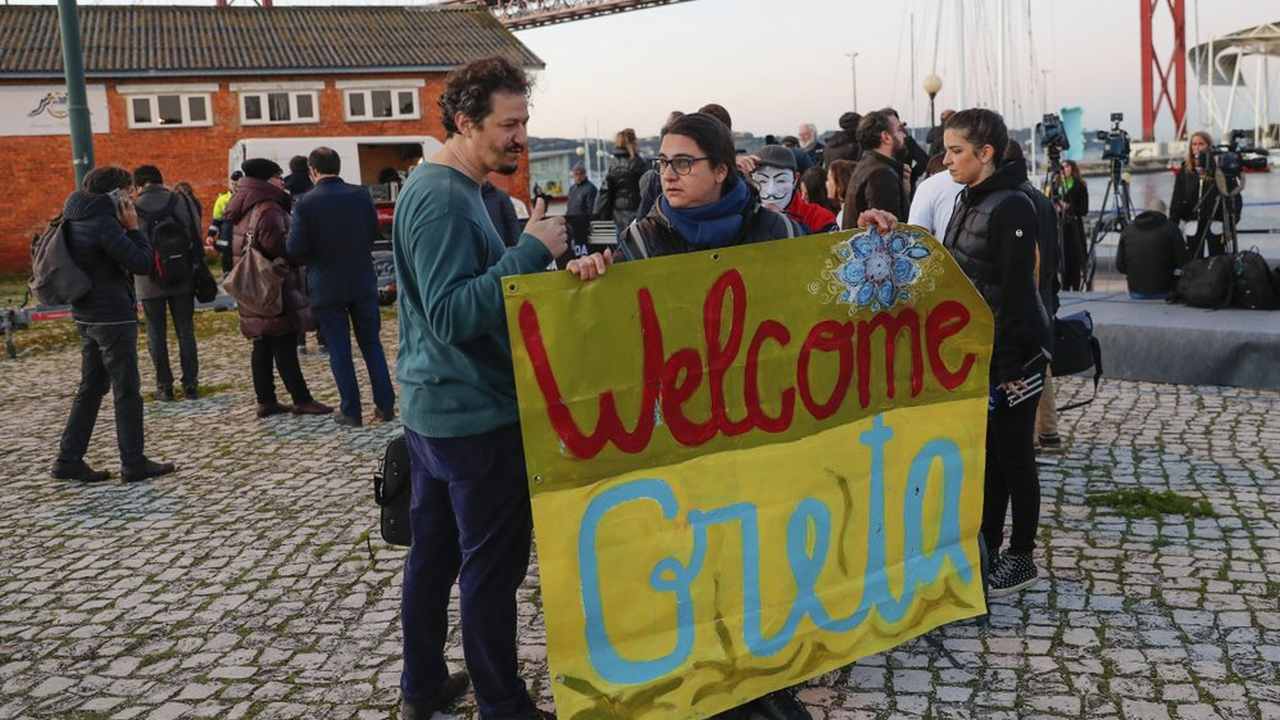 Cliamte activists come to show their support at the arrival of Greta Thunberg in Lisbon, Portugal. Image credit: AP

Members of the international group called Extinction Rebellion held up a banner in Russian that read: “Climate Crisis. To speak the truth. To take action immediately.”

Meanwhile, the U.N. weather agency released a new report showing that the current decade is likely to set a new 10-year temperature record, providing mounting evidence that the world is getting ever hotter.

Preliminary temperature measurements show the years from 2015 to 2019 and from 2010 to 2019 “are, respectively, almost certain to be the warmest five-year period and decade on record,” the World Meteorological Organization said.

“Since the 1980s, each successive decade has been warmer than the last,” the agency said.

While full-year figures won’t be released until next March, 2019 is also expected to be the second- or third-warmest year since measurements began, with 2016 still holding the all-time temperature record, it said.

This year was hotter than average in most parts of the world, including the Arctic. “In contrast a large area of North America has been colder than the recent average,” the U.N. said.

The World Meteorological Organization’s annual report, which brings together data from numerous national weather agencies and research organizations, also highlighted the impacts of climate change including declining sea ice and rising sea levels, which reached their highest level this year since high-precision measurements began in 1993.

“There is no fish in the ocean”: Declining catch worries fishers in southern Karnataka