Greta Thunberg is taking over the world, but she is not alone in this mission

The uniqueness of Thunberg's speech — at times reserved, at others blunt — partly comes from her Asperger's syndrome.

Her imperious "How dare you?" to world leaders at the UN cemented Swedish teen Greta Thunberg's role as her generation's leading spokeswoman on climate change, the culmination of a year of dogged relentlessness, say those who know her.

Though her words did not seem to move the leaders who spoke after her, her speech of only four and a half minutes immediately went viral, racking up tens of thousands of shares and comments on social media.

Thunberg's dominant status in the climate movement is easy to explain, say those who have met the 16-year-old high school student, who is taking a year off from her studies. 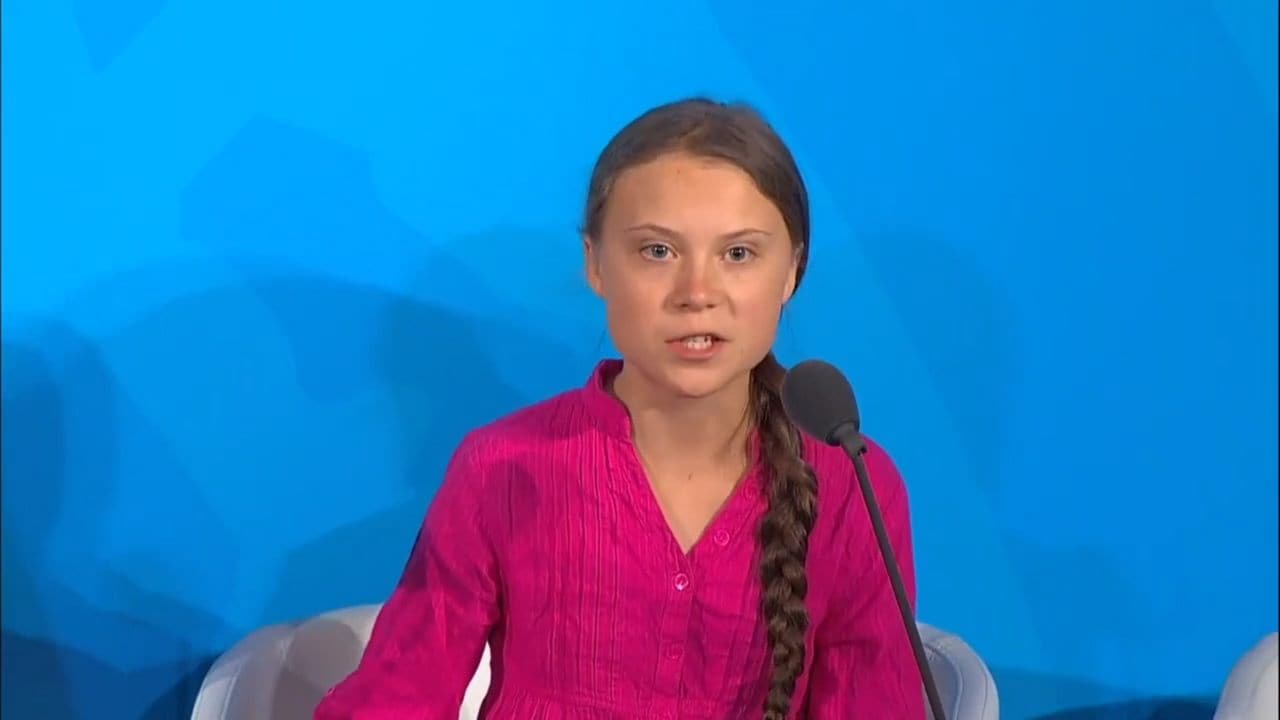 Greta Thunberg during her speech at the UNGA in New York. image credit: Vimeo

"She's done something that seems so unusual: a school strike. School is a very important thing for kids all around the world," said Jennifer Morgan, the executive director of Greenpeace International.

Thunberg started the strikes by herself in Stockholm, with just a sign, in August 2018.

The simplicity of her actions quickly caught the world's attention, and one year later, strikes are occurring in scores of countries, spurred on by social media.

"She's very clear in how she speaks, and I think her words at the summit were words that many people feel," Morgan added.

Winnie Byanyima, the executive director of Oxfam International, agreed, telling AFP that Greta "speaks so powerfully that we must listen."

Thunberg's way of speaking — brief, forceful and backed up by well-chosen scientific data points — contrasts sharply with the style of her peers, as was apparent over the weekend during a youth summit.

Some of the young activists already speak like their elders, reciting long texts lacking in nuance.

The uniqueness of Thunberg's speech — at times reserved, at others blunt — partly comes from her Asperger's syndrome, a mild form of autism that the teen says has made her very direct.

"The whole movement that she has helped inspire, and her speech yesterday, are playing a big part in the long-term task of changing the zeitgeist," said Bill McKibben, the founder of 350.org, an international environmental organization that has been active in the climate protests.

"Our sense of what's normal and natural and proper is shifting, and shifting faster now because of the work that Greta's doing," added the ecologist, who met Thunberg in Washington and New York.

The voice of science

She responded to the accusations on her Facebook page: "There is no one 'behind' me except for myself."

"And yes, I write my own speeches. But since I know that what I say is going to reach many, many people I often ask for input," she wrote.

Her team shared with AFP the names of reputed scientists whom she has consulted: They include Johan Rockstrom, Stefan Rahmstorf, Kevin Anderson, Jean-Pascal van Ypersele, Glen Peters and others.

"I'm convinced that she writes the bulk of her speeches herself, even if she has them proofread," said Belgian climate scientist Jean-Pascal van Ypersele, who is in regular contact with both Thunberg and her father.

Over messages last week, he helped Thunberg clarify a point before she testified in the United States Congress. A selfie of the crew aboard the Malizia II. Image credit: Twitter

Kevin Anderson of the University of Manchester echoed the same sentiments: "I am confident that Greta writes her own speeches, but quite appropriately checks the robustness of facts, scientific statements and any use of numbers with a range of specialists in those particular areas."

For McKibben, Thunberg's abilities are a no-brainer: "If you sat her and President Trump down for 10 minutes and had a basic discussion of planetary physics and chemistry, who do you think would prevail?" he asked admiringly.

Of course, Thunberg does not travel alone. Her father, former actor and producer Svante Thunberg, accompanies her, as well as a longtime family friend, Callum Grieve, from the organization Every Breath Matters, was also with her in Washington.

Multiple NGOs work with Thunberg to coordinate events, such as 350.org, which passes along invitations.

"She doesn't have big NGOs behind her. She is her own person," said Kim Bryan, the spokeswoman for 350.org.

Greenpeace Sweden also helped Thunberg some during the winter by providing her with food and support, said Morgan, but nothing other than that. "She knows she can call on us, but she's very much her own personality," Morgan said."That's pure Greta."