Green economics is robust enough for policy makers to assess impact of their decisions: Pavan Sukhdev

He considers the Prize as a recognition for environmental economics but rues that India did not take the process forward.

Initiated by the United Nations in 2007, the TEEB is a process to give an economic value to nature’s resources such as biodiversity and ecosystem services, so that it is easy for policy makers and corporations to take decisions that help in conservation. It “is a global initiative focused on making nature’s values visible. Its principal objective is to mainstream the values of biodiversity and ecosystem services into decision-making at all levels.” Sukhdev becomes the fourth Indian to receive the award, which is also known as the “Nobel Prize for the environment.” Agricultural scientist M.S. Swaminathan in 1991, ecologist Madhav Gadgil in 2015 and environmental economist Partha S. Dasgupta in 2016 are the earlier winners from India.

Sukhdev is the founder and chief executive officer of GIST Advisory, an organisation that develops platforms for corporates and governments to measure economic impact of their decisions. He is also the president of the World Wide Fund for Nature International (WWF), the international conservation organisation. Sukhdev will receive his Prize on May 1.

In a wide-ranging telephonic interview to Mongabay-India, Sukhdev talked about the global impact the TEEB reports have had since its inception, India’s shyness in implementing environmental economics and the new tools that have been developed to help policy and decision makers take decisions that are better for the environment. Excerpts from the interview:

What does the Tyler Prize signify for the kind of work that you had done since the time of TEEB that you started 12 years ago? How has the process grown from then to today? Has the idea of giving an economic value to biodiversity become more acceptable with governments?

There have been huge steps in understanding that you cannot take nature for granted. There is a fundamental problem in the way that today’s society treats nature. Nature by definition is in the public domain. Pollination services are very important otherwise no food crops can be grown. But no bees or insects ever send you invoices. The value of pollination does not figure anywhere in the GDP.

In the same way trees clean the air. Trees in the forest provide evapotranspiration which leads to rainfall. And most of the agriculture in India is rainfall dependent. The trees don’t send invoices for rainfall generation, so they are not part of the GDP. So the first aspect is the economic invisibility of nature’s services. The forests of Silent Valley. The then prime minister of India, Indira Gandhi, ordered cancellation of a hydroelectric project to conserve this rainforest tract. Environmental economics allows policy makers to take the right decisions by factoring in the economic value of conservation. Image credit: S. Gopikrishna Warrier/Mongabay.

The second aspect is that they are public services. So they belong to everybody and belong to nobody. Just because you restore a public service you can’t necessarily make a profit out of it. For example, if you and I started planting some trees in Vidarbha, it would generate rain and some cotton farmers would bless us. But, we won’t be able to profit from it because we cannot tell the clouds where to rain. We can only plant trees and we know that it makes a difference, and some farmers somewhere will benefit through more rainfall and more timely rainfall. Therefore, there is no way that a business – that is about making profit – can actually reengineer the way the world works.

So you must start by recognising that the economic invisibility of nature is a problem and the way in which we have constructed our economic systems – that is market based – has a defect. This defect is that it does not recognise externalities that affect natural capital. In other words, it does not reflect the invisible impact of our business activities on nature. This is the fundamental challenge of our time – the economic invisibility of nature and her services to humanity.

And yet, without these services the poor cannot survive, the farmers cannot survive and we in society cannot survive. But, our economic system has a defective lens which is unable to understand this basic fact. So, environmental economics is necessary, for it enables policy makers and businesses to recognise and demonstrate – in economic terms – and at times capture and reward these invisible values that are being generated by nature, which we are sadly losing because of our short-sightedness and inability to understand this basic difference between private goods and public goods.

This is the challenge. We have to use the same toolkit to explain in a language that today’s policy makers and business leaders understand, i.e., an economic language and say don’t do these things that have high externalities. I have just been in Davos and spent a lot of time there with my colleagues in GIST – the Global Initiative for a Sustainable Tomorrow, which is my company, along with the participants. We launched two platforms, both of which are targeted to enable companies to measure their impact on nature, to measure all of the invisibles. So today it is possible for a government that is thinking right, or a company that is thinking right, they can use our platforms to do that. Without the services from the forest, the poor will not be able to survive. Image credit: Gurvinder Singh.

The TEEB framework plus large data

There were two issues that arose when the TEEB started. The first one was the question that should man even put an economic value to nature. Has the resistance to that reduced? Second, while conceptually the idea of putting a value to nature is good, the scientific methodology and systems needed to put this in place needed to be more robust. Over the years have these systems become so robust that you can design a platform that governments and companies can feed in their details and get their impact in figures?

The fact that the TEEB framework was published 10 years ago and used by so many people, brings people to understand that this is not an outlandish idea, it is a United Nations report. People realise that this is mainstream and not a kind of crazy idea.

By the way, it is not about putting a price on nature, It is about recognising, demonstrating, recognising and valuing nature’s services to people. Nobody is buying or selling a cloud. The reality that forests can generate rainfall is vital for agricultural productivity – recognising and demonstrating that scientific value is the reality. 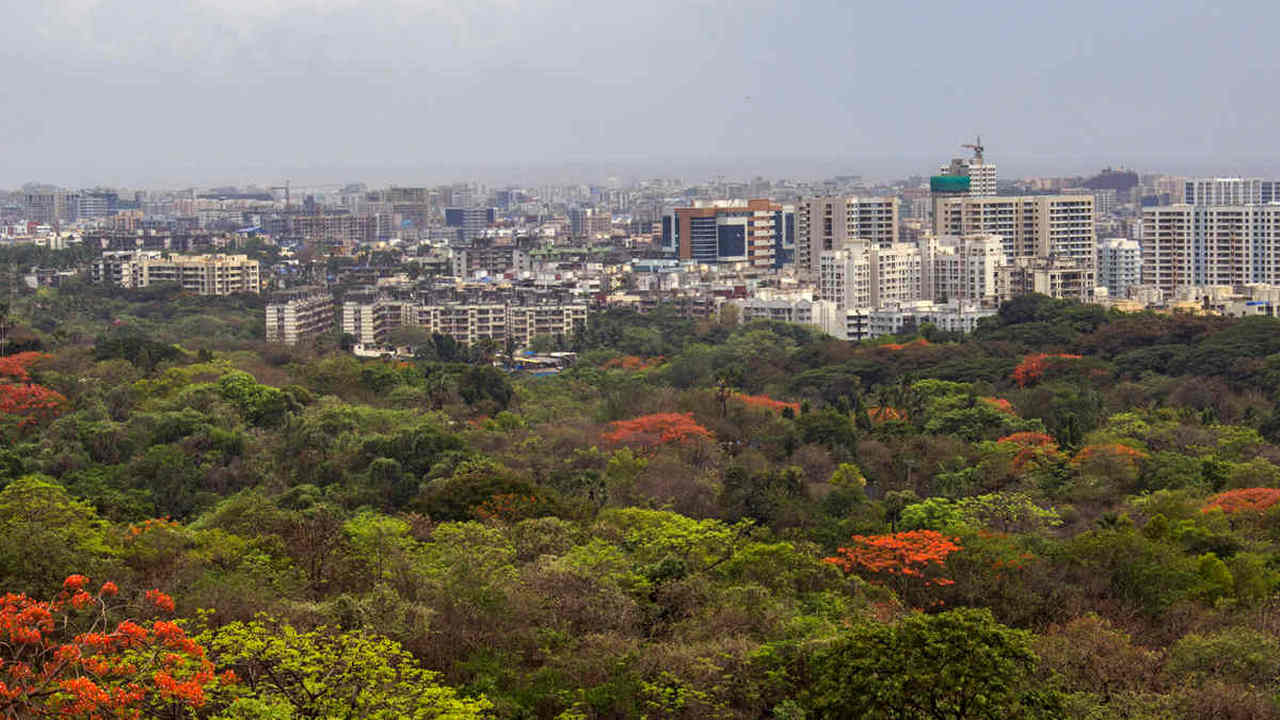 A view of Aarey Milk Colony. When a forest inside a city is converted for a Metro car shed, ultimately it is the poor and the marginalised who will suffer. Image credit: Rajesh Sanap

India did not keep pace

How has this progressed in India? There was a TEEB India interim report in 2014. Are you happy that India is keeping pace globally or is there anything lacking in the environmental economics process in India?

If we go back to the TEEB report, the study leader was an Indian (Pavan Sukhdev), and out of the five senior experts who were each responsible for one of the TEEB reports, there were two more Indians – Pushpam Kumar and Haripriya Gundimeda. While Kumar is currently working as a chief economist with the United Nations Environment Programme, Gundimeda is with the Indian Institute of Technology in Mumbai.

In a global report there are three Indians, I would imagine that it would make India proud about it, and do something from the findings. I am disappointed that not enough has been done. I think the opportunity lost is huge, especially for the poor. The concept that Haripriya and I came out with was ‘the GDP of the poor’.

If a forest is destroyed because of conversion to agriculture, industry or a car park, who suffers the most? It is the poor farmer who suffers. There isn’t enough nutrients and fresh water going to his fields from the natural cycle. His cattle and goats suffer because they have to eat food that has to be purchased from a distance, when they could have been easily eating from the forest edge. It is the poor farmer’s wife who has to suffer for she has to walk many kilometres to the nearest forest to collect the fuelwood which she needs to cook food for the family.

So nature is the GDP of the poor. Their household incomes are hugely dependent on nature. More than 60% of the households in India are still using fuelwood. Why don’t we recognise that reality and do something about it?

You are saying that India did not catch up the way it should have with the global processes?

You tell me, right now we publish GDP figures every year, isn’t it? All the technology needed for calculating the GDP of the poor is already there. Do we publish the GDP of a village in India? Why don’t we do it? Considering that three of the founders of this concept are Indians. It has been done in Indonesia. The first GDP of the poor was calculated for the province of Kalimantan in Indonesia, and the next one was done in Vietnam. Why can’t we do it? With recurrent droughts, dry fields like this has become a common sight in the Marathwada region of Maharashtra. Image credit: Meena Menon.

There are environmental economists in India and an Indian Society for Ecological Economics. Are you saying that despite these there hasn’t been motivation and support from the government to take this forward?

At the end of the day the government has to make up its mind whether it consider the resolution of rural poverty to be an issue, which I believe it does. We are providing a tool kit which enables it do so – measuring what matters. What is GDP? From the income side it is equal to corporate profit plus taxes, salaries, net rent, net interest, minus depreciation and incomes outside the private sector. In this the single most important factor from the development point of view is the profit of farmers. What we are saying is that the GDP of the poor is a way of recognising that very important value that needs to grow. We need to realise that of the value for rural households in countries like India, Vietnam and Indonesia there is a large part that comes directly from nature.

If that is recognised would the trauma of the Indian farmers reduce? The farmers have been suffering for quite some time and more so in the past half-decade.

Of course. If we recognise that aspect such as the use of fresh water decreases, or the aspect of sequestration of carbon increases, on-farm health (of the farmers themselves) and off-farm health of people downstream will improve if we do natural farming. We will realise that the natural capital improves with natural farming. Instead, we are stuck in this debate that every time natural farming is done in Andhra Pradesh or Maharashtra there are a bunch of academics and journalists criticising it. What’s the point? You need natural farming to improve the livelihoods of the poor and to grow the GDP of the poor.

This article was originally published on Mongabay.com.
Mongabay-India is an environmental science and conservation news service. This article has been republished under the Creative Commons licence.