Sprinkled across the ocean floor, invisible from the surface, are hundreds — or maybe thousands — of sinkholes. These “blue holes,” as scientists call them, do not swallow up everything incapable of fighting their gravitational force, like their black hole cousins. But to those who study them, they are nearly as intriguing.

This week, one particular blue hole off Florida’s coast — the Green Banana — captured the imagination of many a land dweller. Headline after headline has offered a variation on the theme: Scientists are flocking to a mysterious blue hole. One publication asked: “What Could It Be?”

What it is is the Green Banana, one of the deepest blue holes ever discovered, according to Jim Culter, a senior scientist at Mote Marine Laboratory in Sarasota, and it’s on the verge of being studied in the most comprehensive way yet.

Scientists will venture into the Green Banana’s depths next month, when they hope to answer longstanding questions about whether the sinkhole — which extends around 275 feet, like an hourglass-shaped 20-story building anchored in the ocean floor — connects to other sinkholes and whether fresh water flows within.

The scientists leading the mission to the sinkhole, which begins 155 feet below the ocean’s surface around 50 miles off St. Petersburg, agree that the name, the Green Banana, sounds like a bar in Key West. According to Larry Borden, a longtime commercial fisherman and boat captain who has known about the Green Banana for decades, the name emerged in the mid-1970s after a boat captain saw a green banana skin floating by a known “spring,” as fishermen referred to the underwater sinkholes back then. 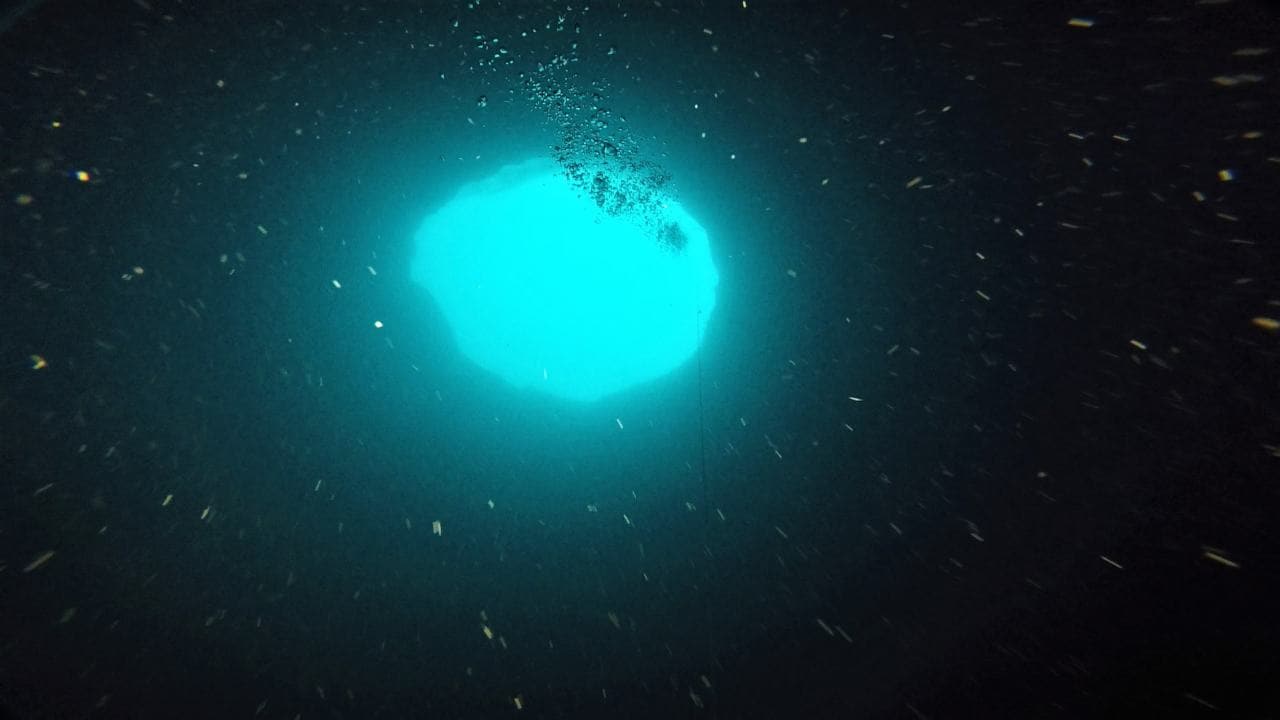 A diver’s view looking up to the opening of Amberjack Hole. Image: Mote Marine Laboratory

They were called springs, Borden said he had heard, because in the 1530s, when Spanish explorer Hernando de Soto was hanging out in the area, fresh water streamed out of the holes.

Spear fishermen who gathered near the holes centuries later, including Borden, wondered how deep they were.

Eventually, Borden told a diver friend, Curt Bowen, about the Green Banana, and in 1993, Bowen became one of the first people to dive to the bottom and map the blue hole. An article in Advanced Diver Magazine, which Bowen owns, posited that there were so many sinkholes on the floor of the Gulf of Mexico that if it were possible to drain it, “it would probably look like Swiss cheese.”

Culter said scientists have verified about 20 underwater sinkholes on the west coast of Florida alone, but there are probably twice that number. Part of what makes them hard to count is also what makes them so intriguing, said Emily Hall, a scientist at Mote Marine Laboratory leading the mission: They are difficult to spot from above.

“You’re in the middle of the Gulf of Mexico and you don’t see anything all around,” Hall said. And then after diving for quite some time, “This hole opens up, and it’s booming with life.”

There seems to be something about the unusual seawater chemistry in blue holes that is particularly good at facilitating life. Pools of fish, oodles of sponges and an array of plants are common within these “oases,” as Hall calls them. The water inside is also often atypically clear, which is part of why they are beloved by divers.

One reason that so little is known about them, according to the National Oceanic and Atmospheric Administration, is that their entry points are often narrow — before they broaden out — making it impossible for an automated submersible to enter.

In next month’s mission, which NOAA is funding, the plan is to carefully lower a 600-pound lander inside. The lander, shaped like a triangular prism, and divers will collect water and sediment samples and complete a biological survey, Hall said.

“The excitement comes from the idea that this is exploration. We don’t know what we will see down there biologically and chemically,” she said. “We have an idea. But every time we go down there we find something new.”

The team recently explored a nearby blue hole, around 350 feet deep, known as Amberjack. They were surprised to discover two dead smalltooth sawfish, an endangered species, at the bottom.