LYNA has brought up the accuracy of reading biopsy images to 99 percent per slide: Google.

One of Google’s AI cancer-detection tools, LYNA, has emerged a success in a proof-of-concept study to address the tricky business of detecting cancer cells that have spread to lymph nodes, Google said in a blog post this week.

LYNA's deep-learning approach is optimized to recognize and display patterns of cancer cells in a heatmap of a biopsy (like in the image below). The algorithm has been trained to improve the imaging process by studying the biopsy at different magnifications.

The software then throws up a scan that pathologists can use to more easily spot cancer cells in a dense tissue.

This, Google says, has produced "a model that either matched or exceeded the performance of a pathologist who had unlimited time" to process the images.

Among the many tricky aspects to a cancer diagnosis, the toughest is arguably finding out if cancer cells have spread to other organs in the body by the process of metastasis — particularly to lymph nodes.

Lymph nodes are an important part of the body’s immune system. They form a network of tiny tubes that carry a fluid called lymph through the skin and deeper parts of the body. 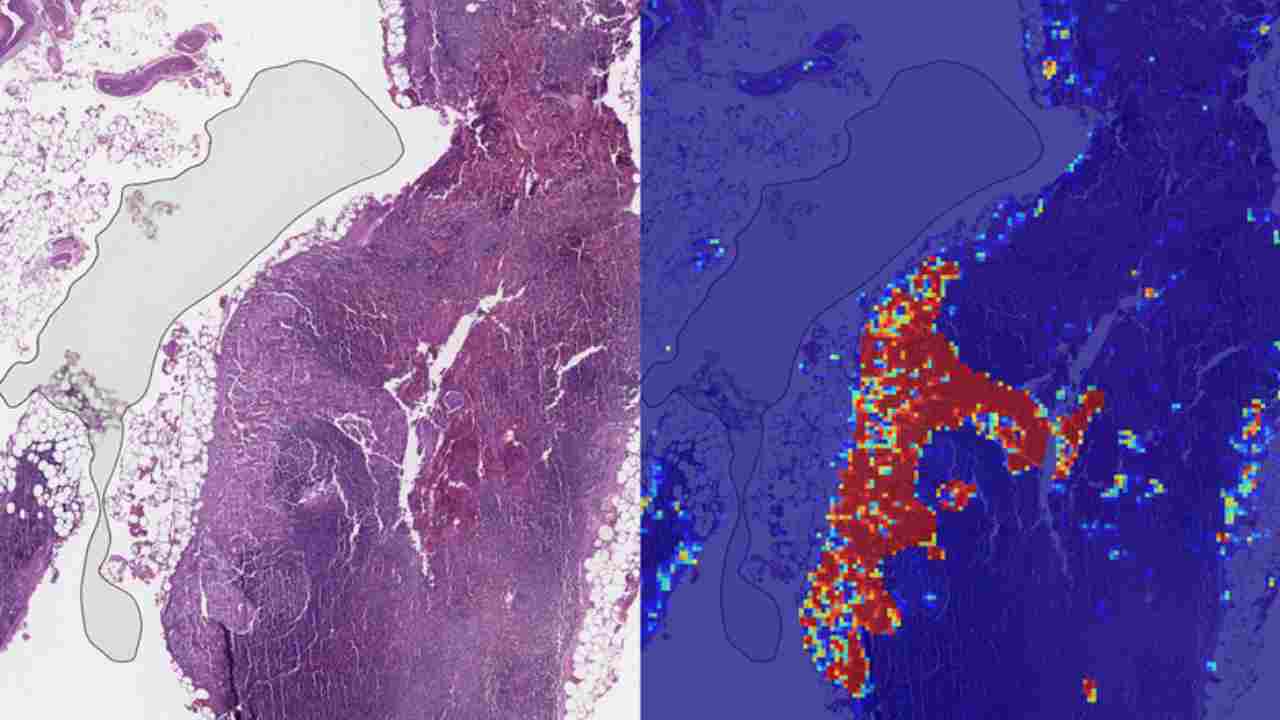 Assistance from LYNA improved the accuracy of detection to 99 percent on each slide of a biopsy tissue. Image courtesy: Google

The answer to whether cancerous cells have spread to these nodes is a critical one. It helps pathologists stage nearly every type of cancer to find out how aggressively a cancer has spread.

In the case of breast cancer, looking at cancer cells that have spread to lymph nodes plays an important role in treatment.

Decisions about what treatment option or combination offers the best chance of recovery are dependent heavily on these findings.

Detecting these mobilised cancer cells early enough (or in the small numbers they may exist in) is only possible 38 percent of the time, as a study points out.

In 2017, Google described its deep-learning approach to improving the accuracy of these reports, using an AI tool called LYmph Node Assistant (LYNA). In early studies, LYNA improved the resolution of images and their detection from biopsy samples considerably. A similar diagnosis could prove labour-intensive and error-prone in the hands of a busy pathologist. With some tweaking and experience under LYNA's belt, Google researchers have now come out with an improved algorithm that shows promise.

LYNA stands an AI-assistant designed to help a pathologist diagnose metastasised cancer cells in lymph nodes. LYNA has been shown to bring down the burden that falls on a pathologist to identify (and possibly, miss) metastatic cells in early stages or tiny populations of cells.

A team of pathologist and LYNA was able to detect these tricky cases with twice the accuracy that a pathologist or the software could alone.

In two studies published in The American Journal of Surgical Pathology are Google's findings from this latest AI-enable break in cancer detection.