Most of the dots in the image are supermassive black holes at the centres of galaxies, devouring gas and becoming so hot that the glow can be seen across the universe.

A German-Russian space telescope has now captured a view of the sky in X-rays. The image records some breathtaking events in heaven.

According to a report in CBS News, the image was captured using the eROSITA X-ray telescope, mounted on the space observatory Spektr-RG.

The report mentions a team of researchers at the Max Planck Institute for Extraterrestrial Physics in Germany saying that the resulting image shows never before seen view of the sky through X-ray vision. The energetic universe as seen with the eROSITA X-ray telescope. The first eROSITA all-sky survey was conducted over a period of six months by letting the telescope rotate continuously, thus providing a uniform exposure of about 150-200 seconds over most of the sky, with the ecliptic poles being visited more deeply. Image credit: Jeremy Sanders, Hermann Brunner and the eSASS team (MPE); Eugene Churazov, Marat Gilfanov

Peter Predehl, the Principal Investigator of eROSITA was quoted as saying, "This all-sky image completely changes the way we look at the energetic universe."

He added, "We see such a wealth of detail — the beauty of the images is really stunning."

According to a report in BBC, the orbiting telescope was launched last year in July and was despatched to an observing position around 1.5 million km away from Earth.

The report adds that eRosita's first all-sky data-set records over a million sources of X-rays.

Kirpal Nandra, who heads the high-energy astrophysics group at the Max Planck Institute for Extraterrestrial Physics (MPE) in Garching, Germany said, "That's actually pretty much the same number as had been detected in the whole history of X-ray astronomy going back 60 years. We've basically doubled the known sources in just six months." 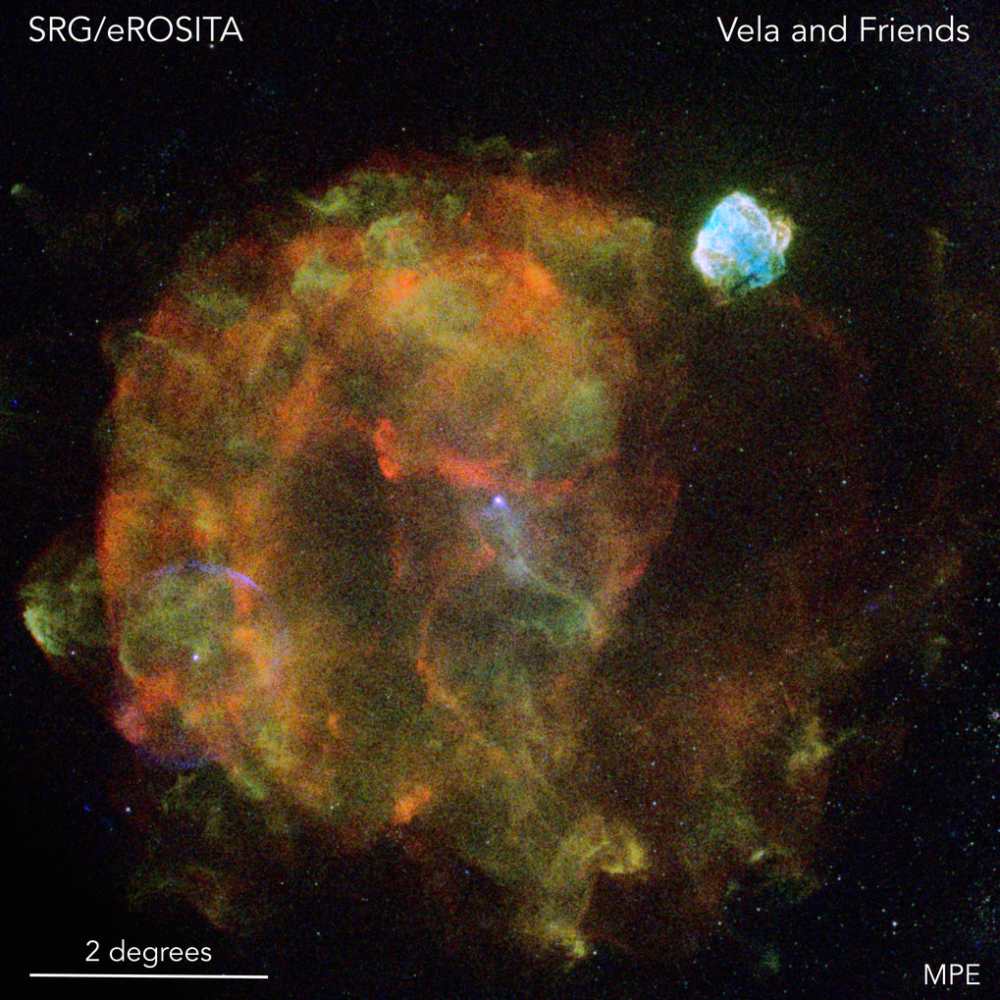 Due to its size and close distance to Earth, the "Vela supernova remnant" which is shown in this picture is one of the most prominent objects in the X-ray sky. The Vela supernova exploded about 12000 years ago at a distance of 800 light-years and overlaps with at least two other supernova remnants, Vela Junior (in the picture seen as bluish ring at the bottom left) and Puppis-A (top right).
Image credit: Peter Predehl, Werner Becker (MPE), Davide Mella

The BBC report also said that the map makes use of the Aitoff projection, which unwraps the sphere of the sky to an ellipse.

A report in Science Mag stated that most of the dots represented in the image are supermassive black holes at the centres of galaxies. These are devouring gas, and in the process becoming so hot that the glow can be seen across the universe.

It adds that the four-year-goal of the project is to map the positions of millions of such galaxies to understand how gravity attracts them together in 1000-strong clusters. Researchers also plan to figure out how the mysterious force known as dark energy acts counter to gravity, pushing matter apart helps in the expansion of the universe.