Savin will be dropping markers along the way to help marine oceanographers study Atlantic currents.

A 71-year-old Frenchman set sail across the Atlantic on Wednesday in a barrel-shaped orange capsule, hoping to reach the Caribbean within three months thanks to ocean currents alone.

"The weather is great – I've got a swell of one metre and I'm moving at two or three kilometres an hour," Jean-Jacques Savin told AFP by telephone after setting off from El Hierro in Spain's Canary Islands.

"For the time being my capsule is behaving very, very well and I've got favourable winds forecast until Sunday."

Savin had worked on his vessel for months in the small shipyard of Ares on France's southwest coast.

Measuring three metres (10 feet) long and 2.10 metres across, it is made from resin-coated plywood, heavily reinforced to resist waves and potential attacks by orca whales. In this photograph taken Saturday 22 December, 2018, 71-year-old Frenchman Jean-Jacques Savin stands on top of his 10-foot-long, 7-foot-wide resin-coated plywood capsule, which will use ocean currents alone to propel him across the sea. AP

Inside the capsule, which weighs 450 kilograms (990 pounds) when empty, is a six-square-metre living space which includes a kitchen, sleeping bunk and storage.

A porthole in the floor allows Savin to look at passing fish.

A former military parachutist who served in Africa, Savin has also worked as a pilot and a national park ranger.

He has stowed away a block of foie gras and a bottle of Sauternes white wine for New Year's Eve, along with a bottle of red Saint-Emilion for his 72nd birthday on January 14.

Savin hopes currents will carry him naturally to the Caribbean without the need for a sail or oars – "maybe Barbados, although I'd really like it to be a French island like Martinique or Guadaloupe," he quipped. 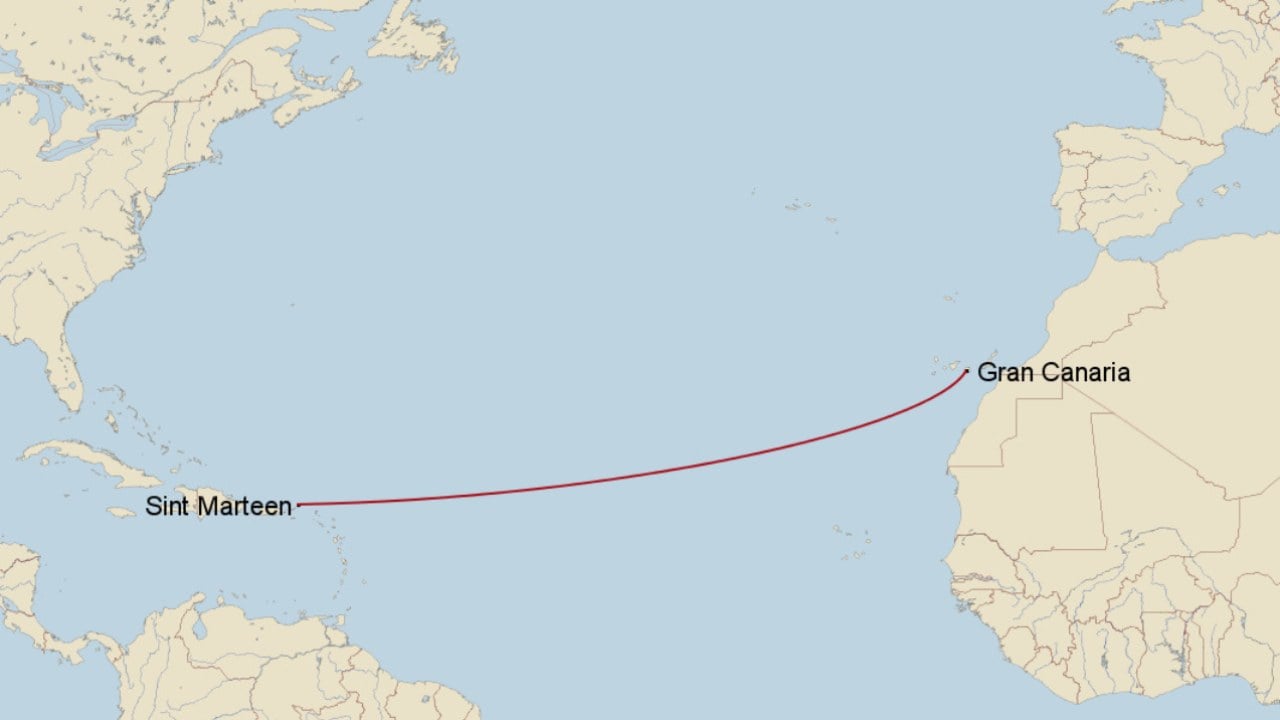 The East-West Atlantic crossing from Canary Islands in Spain to Sint Maarten in the Caribbean. Savin set off from El Hierro in Canary Islands on Wednesday and is aiming to complete his 4,500-kilometre journey to the Caribbean in about three months. Image: Landsamreisen

"That would be easier for the paperwork and for bringing the barrel back."

Along the way, Savin will be dropping markers for the JCOMMOPS international marine observatory to help its oceanographers study the currents.

And he himself will be the subject of a study on the effects of solitude in close confinement.

Even the wine onboard will be studied: He is carrying a Bordeaux to be compared afterwards with one kept on land to determine the effects of months spent tossed on the waves.

Savin has a budget of 60,000 euros ($68,000) for his expedition, covered in part by barrelmakers and a crowdfunding campaign.